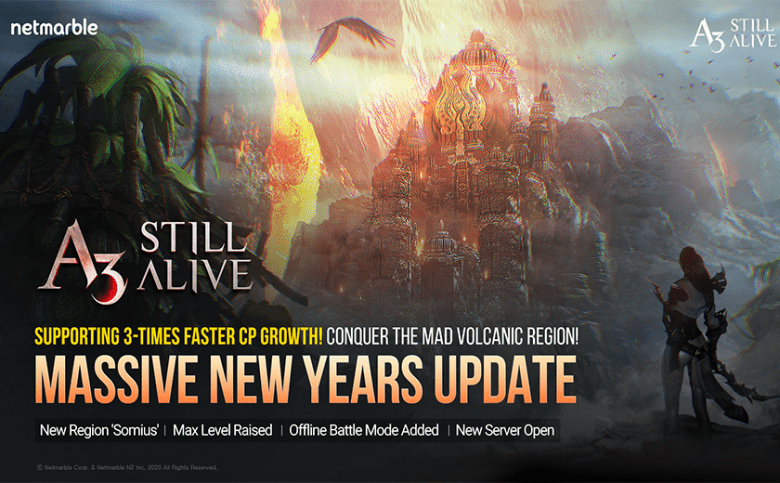 Netmarble’s latest update for its popular Dark Fantasy Open World MMORPG A3: STILL ALIVE officially introduces the previously-teased “Somius” region that is now open for Warriors to explore and conquer, alongside various in-game events and enhancements that are available for players.

The new Somius region introduces new quests, new territories for players to explore, and the first two floors of a new Corrupt Aselcan Ruins dungeon to conquer. To prepare for the Somius region, the maximum player level has increased to 140 and new level 130-140 equipment has been added to the game.

A new Offline Auto Battle – ALIVE MODE is also now live. Based on A3: STILL ALIVE’s unique AI Battle feature, players can use detailed strategy to hunt and continue the excitement of growing their characters’ strength even while they are offline. ALIVE MODE offers major alerts – including item achievements, deaths, lack of supporting items and full inventory – to keep players updated on their character’s status. ALIVE MODE also supports active gameplay timings that stand out from other auto battle modes that only feature basic auto-play and reward collecting.

In newly opened servers, players will be given a 3x Experience Boost, and can participate in a Bonus Time event. Various rewards, including up to 3x Heroic 6★ Soul Linkers, a Legendary 8★ Conversion Ticket, and a Heroic Accessory Chest, will be provided via the Somius Special Event, Adrasil’s Trial Ranking Event, and a new Guild Event.

To celebrate this major update, every player will be given an assortment of in-game items valued at $150 by inputting the coupon code ‘POWERUPA3’ so that they can continue enjoying A3: STILL ALIVE.

Other changes made to the game include: