Wide Right Games has officially released their latest trailer for the upcoming “bat$#!% crazy” arcade-style platformer Freedom Finger which was featured in this year’s Kinda Funny Showcase. The trailer gives a sneak peek into the music-driven fight for freedom in space with glimpses of the game’s stellar cast and uniquely styled hand-drawn animations that are reminiscent of 90’s cartoons a la Ren and Stimpy. Alongside the official release of the trailer, Wide Right Games has also announced that closed alpha will arrive in early August.

Debuting during this year’s Kinda Funny Showcase, the latest trailer gives fans a slice of what Freedom Finger will deliver, with snippets of the voice work from the game’s stacked cast which features John DiMaggio, Nolan North, Sam Riegel, and Eric Bauza whose collective resumes include well-loved games and television series such as Uncharted, Futurama, TMNT, and Adventure Time to name a few. The trailer also showcases the game’s soundtrack which acts as a rhythmic force and backdrop to Freedom Finger, which includes music from artists such as Aesop Rock, Red Fang, Power Trip and more that is thoughtfully and meticulously synced with the game’s levels, pacing and actions.

From the mind of Emmy Nominated creator, Jim Dirshberger and Mark Zorn with animations by Travis Millar, Freedom Finger presents a satirical, stylized and music-driven experience that takes players through 36 hand-crafted levels. The arcade-style side scroller blends melee and shoot ‘em up mechanics that players dole out from the middle finger space ship that they pilot, following missions given to them by their commanding officer voiced by Nolan North. Players are able to give enemies the proverbial finger by punching enemies to smithereens or using them as a weapon by grabbing them and throwing them back at their own forces or take the ranged approach and shoot enemies as they fly through 12 different worlds.

The Freedom Finger closed alpha will be arriving in early August and will offer players a full run of the game, “It reveals the full story, which I think is one of the highlights of the game,” offers creator Jim Dirschberger “In addition to all the levels, music, and art you get to see how it comes together story-wise, there’s a pretty wild twist at the end.” For players that can’t wait to give enemies the finger, Wide Right Games has also announced that a limited number of a slice of life demos is also available. 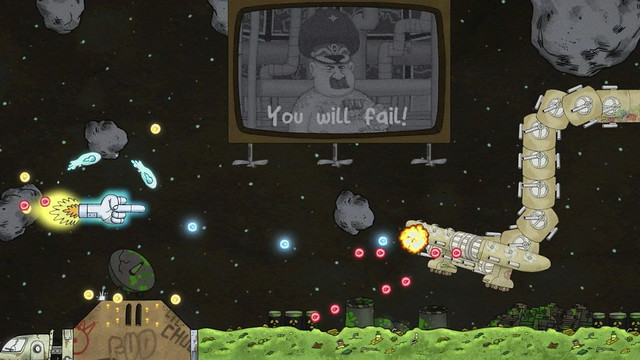