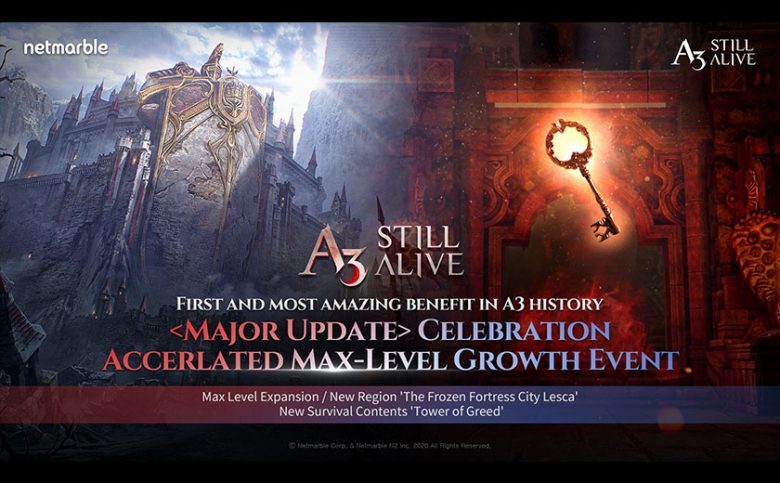 Today’s A3: STILL ALIVE update introduces an all-new main region to explore – Lesca, ‘The Frozen Fortress City’, alongside a new PvP mode known as the Tower of Greed, and a new Fast-Pass system that allows new and returning players who own a pass to quickly clear several main quests.

This month’s update introduces a handful of new regions and activities for players to experience. These include Lesca, ‘The Frozen Fortress City’, the Serrod Ice Cliff Equipment Dungeon, and a new world boss – the Starving Kudrak. Pre-seasons for the Tower of Greed, a new PvP mode where players must fight for keys by defeating monsters and other players, in order to continually climb the tower, officially begins today as part of today’s update.

A3: STILL ALIVE’s Fast-Pass system allows all players who own the pass to quickly clear several main quests. Once used, automatic adjustments are made to a player’s level and reputation so the minimum requirements to clear chapters are met. Players can look to receive a package of rewards via their mailbox, quickly achieve Level 160 for their characters with the Fast Pass. As free level-ups up to Chapter 19 are available to all Fast Pass users, Blue Diamonds will also be provided to support Fast Pass up to Chapter 22.

Also, when provided with rewards by participating in various events will allow the players to achieve three million combat power easily.