Artix Entertainment, with the help of Warner Music Artist Services, is excited to announce that the second band in their video game Battle Concert Series is ALICE IN CHAINS. For three weeks only, the massively multiplayer musical event will be taking place in two video games, AdventureQuest 3D and AdventureQuest Worlds. The games are free to get and the battle concert if free for all players to enjoy. Non-stop shows will run continuously from November 7th, 2019 to November 30th, 2019 inside the games. When this limited-time event ends, it is gone forever.

“It was pretty risky putting a famous band on stage and filling their mosh pit with monsters for our 1st Battle Concert with Korn. But we were overwhelmed by the positive response!” said Adam Bohn, CEO/Paladin of Artix Entertainment. “To raise the bar for the upcoming Alice in Chains event, we’re gonna flood the arena with water; and then burst the walls apart and teleport the whole show somewhere entirely new. Also, more monsters.”

ADVENTUREQUEST 3D & ADVENTUREQUEST WORLDS
The fantasy MMORPGs, AdventureQuest 3D and the 2D AdventureQuest Worlds, bring free to play epic adventures and ever-growing worlds to players on PC, mobile, and browser. In order to bring ALICE IN CHAINS into the worlds of AdventureQuest, Artix Entertainment has created video game character versions of the band members, their instruments, and a new experience in each video game’s Arena.

AdventureQuest 3D can be played on Apple iOS, Android, and STEAM for free. 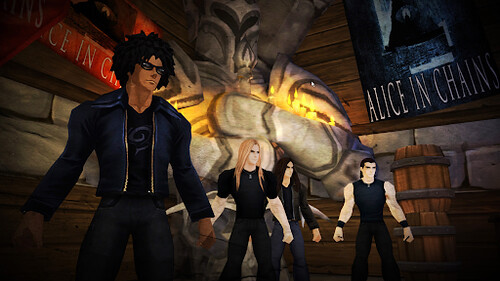 Players will experience the ALICE IN CHAINS battle concert with other fans from all over the world, from November 7 to November 30th. New and existing players of ADVENTUREQUEST 3D can get to the event through the News screen, talking to an ALICE IN CHAINS promoter in town, the Travel Crystal, your map, a Magic Concert Ticket which can be picked up in-game for Free now. The battle concert and Arena lobby quests are free for everyone to enjoy.

Both video games and the ALICE IN CHAINS battle concert is free for all players to experience. Players who want to show their support to the band and games can buy an ALICE IN CHAINS item collection in-game which includes things like exclusive band armors, musical items, pets, weapons, travel forms, rare badges, and a backstage pass. The backstage pass unlocks the player’s access to the VIP Backstage Area. There pass holders can relax and chat exclusively with other pass holders, access quests for additional limited-time items and, of course, pose for a selfie with the virtual band.