Apex Legends and it’s “Free To Play” accessibility has taken the gaming scene by storm with a stealth attack release only seen coming by a few keen insiders. Not only is Apex Legends accomplishing feats that are revolutionary in the Battle Royale scene but also in the gaming industry as a whole. With absolutely zero marketing or advertising, EA and the team at Respawn Entertainment released Apex Legends in a way that has never been done before (going so far as to announce and release during its reveal stream on Twitch). With thousands downloading it within the first hour, it has now reached a player count of 10 million unique users in only four days. Boasting a unique and optimized take on the Battle Royale genre, Apex Legends is set to become one of, if not the biggest, Battle Royale games on the market. With Fortnite directly in its crosshairs, now is a crucial time for Apex Legends as it has a chance to become something monumental. 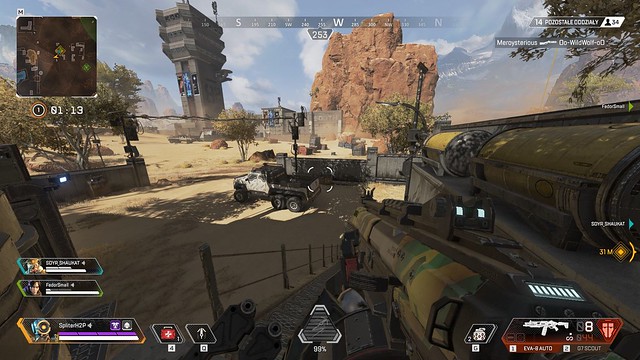 Whether you are a Battle Royale veteran or completely new to the genre, Apex Legends offers numerous unique aspects to its gameplay and mechanics so there’s many tricks to master. Though it is not the first Battle Royale game to feature a Class System, Apex Legends has a diverse set of selectable characters that make up the three-man squads. Each squad can be strategically shaped by the players as the selected characters will play off their abilities and play styles. The final squad standing earns the Champion title of the match. I have played hours of other First Person Battle Royale Shooters, and I can confidently say that Looting in Apex Legends is much more uniquely designed and streamlined. Fully attached weapons that you have equipped will, when swapped for a new weapon, equip all compatible attachments onto the newly equipped weapon. Items that are not able to be used or are not needed are marked as such in loot stashes. Armour, weapon attachments, and backpacks will not be equipable if they are worse than what you have. If, under unfortunate circumstances, you happen to only find weapon attachments, once you find a gun it will automatically attach all relevant attachments onto the weapon without the need of player input. On top of all of that, Apex Legends has the most intuitive Ping-Notification System of any game I’ve ever played. Ping enemies, items, places, care packages and death stashes; call out the ammo, attachments, optics, heals, or armour repairs you may need through an audible call heard by your teammates, no matter how far away. Mark where you want to loot, where you think enemies have been, and more through a system that is, like many things in Apex Legends, incomparable to anything else in the gaming scene. 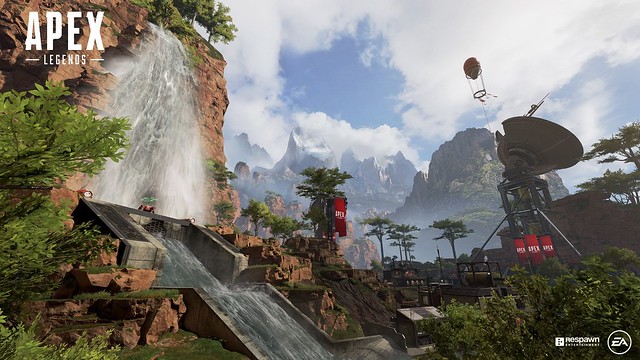 Through a diverse series of cosmetics, customize your favorite characters with a plethora of skins, in game audio lines, character card banners and poses, in game executions, and more with the earnable currency or through purchasable currency in the game’s store. Level up with earned experience points in order to unlock new playable characters and Apex Packs, which give cosmetics items and crafting materials at random. The initial public reception of the in game store was that the skins do seem to be overpriced with some single skins costing the player $20 USD or more depending on your region. Though all purchases are only cosmetic, $20 for a single weapon skin is outrageous (I personally will not be spending any money in the store). Luckily all skins sold in the store for real money are also craftable with materials earned through “Apex Packs” after leveling up. This system is still not perfect though as Crafting Materials are only earned through packs which award materials at random and don’t guarantee you anything. I would like to see crafting materials awarded alongside “Legend Tokens” after you level up, removing the random aspect to earning them. This goes without mentioning you are not awarded an “Apex Pack” at every level. 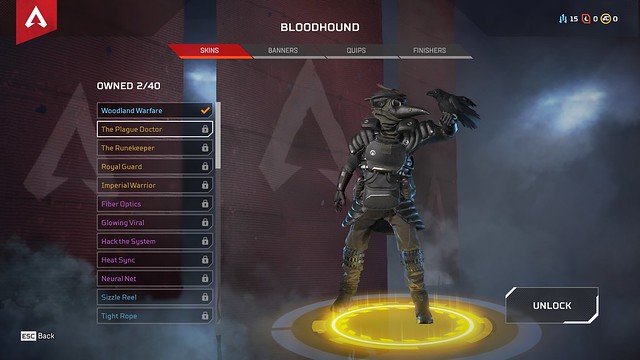 Earn extra experience through the amazing “Kill Leader” and “Champion Squad” bounty systems. Kill the Champion Squad of the match, which is listed for everyone to see at the start of the match before you drop in. This squad is selected based on prior experience and is usually a skilled set of players who have recently won a match. Manage to wipe them out and you gain a large bonus of experience, regardless of if you win or lose the round. Secondly, you can manage to become the Champion Squad of the match. This happens when you are the last squad standing so you are awarded a large bonus of experience. You can also become the “Kill Leader” in a match, in which you manage to take out the most players. Lastly, if you come across the current “Kill Leader” and manage to kill that player, you are awarded bonus experience based on the bounty on their head. The Kill Leader, their bounty, and the squad of that player are smartly displayed all over the map on various large screens and digital banners showcasing their character choices, cosmetic banner, badges, pose selections, kills,  and chosen stat trackers (i.e. lifetime kills, damage dealt on their selected character). This system drives players to be aggressive and become the “Kill Leader” and “Champion Squad” to show off hard earned cosmetic choices as well as earn that sweet experience to level up and earn “Legend Tokens” that unlock new characters and cosmetics. 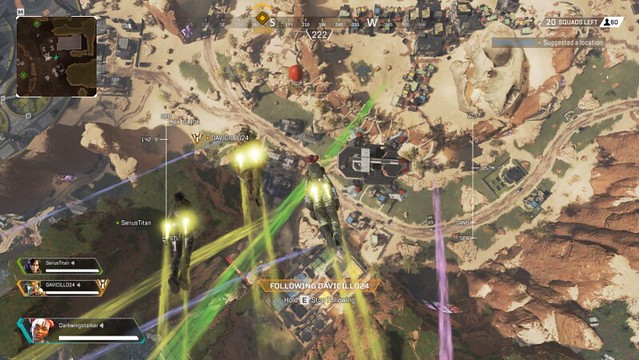 With all the strong aesthetics of Apex Legends, there are only a small amount of critiques that need some attention. These are greatly outweighed by the excellent attributes of the game, but there is always room for improvement and I’d like the team at Respawn Entertainment to definitely work on a few specific things. Firstly, in certain instances, the start of a match can be quite laggy until the player count drops to a lower number. This results in an almost “Slow-Mo” effect that causes player movement to be stuttered and sluggish. Through my testing, when using healing items the item consumption timer truly counts down in slow motion. The weapon balancing in the game is great overall, but there are a few weapons (like the alternater SMG and the light ammo pistol) that are underpowered to where you find that you are reloading without a kill after only missing one or two shots on another player. This may be addressed through an overall adjustment of “Kill Time” across the board as it does feel like the damage inflicted is excessive in some situations. Fights last much longer than they should resulting in being “Third Partied” from behind or running out of ammo mid-fight even though you had accuracy during your engagements. Overall, these are small notes that I feel will be addressed and adjusted over time, paired with additional new content and experiences. 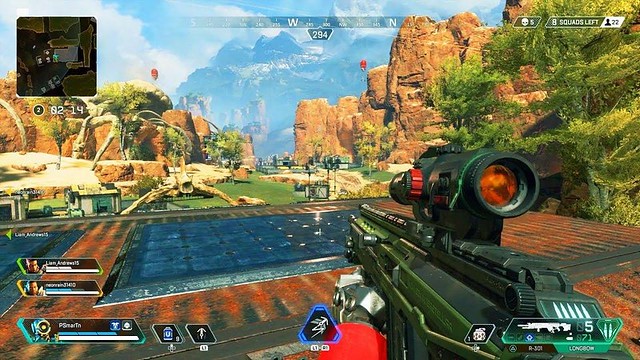 Tags: Action, Apex Legends, Battle Royale, EA, FPS, Respawn Entertainment, review
Summary
With its serious amount of innovation, Apex Legends deserves the spotlight that it’s in right now. Seeing how the game is supported will be key to a long life for Apex Legends. I truly hope that the development team at Respawn Entertainment are prepared for a steady flow of updates in a world where gamers are so hungry for content. Apex Legends is going to have to dish up a serving of new things on a regular basis if it wants to keep the spotlight that it has managed to steal so swiftly. I am eager and excited to see what’s to come with Apex Legends as I am already pleased with what has been offered. This is a “live service” game done properly and despite the public opinion of its publisher, it seems as though Apex Legends is the silent, unanticipated hit that gamers were looking for. Keep a close eye on Apex Legends as it grows over the coming months into what some are anticipating to be the next biggest game in the Battle Royale scene.
Good
Bad
9.2
Amazing
Gameplay - 9
Graphics - 9
Audio - 9
Replayability - 10
Controls - 9

The Frontier War is over. After hundreds of years of conflict between the Interstellar Manufacturing Corporation and the Militia founded to fight them, the far-off region of space known as the Frontier can finally know peace. But liberation can come at a cost: when the IMC and the Militia departed, they took everything of value and left the Frontier worlds in disarray. With no way to support themselves, the people of the Frontier had no choice but to leave their homes. The brave relocated to the Outlands. A remote cluster of planets on the fringes of the Frontier, the Outlands are untouched by war and teeming with resources and opportunity. But life is cheap here, and danger lurks around every corner. Its pioneers, explorers, and outlaws used to spend their lives locked in an endless power struggle – now, they settle their differences in the Apex Games, a bloodsport where Legends from all corners of the Frontier compete for money, fame, and glory.
9.7
Average User Rating
2 votes
Click on a star to submit your own rating!
Your Rating: 0
Submit
Genre:Battle Royale
Developed By:Respawn Entertainment
Publisher:Electronic Arts
Platforms:PC, PlayStation 4, Xbox One