Arizona Sunshine, the top selling VR shooter launches for Oculus Quest today at 10AM PT / 7PM CET. Day one is just the beginning for the untethered VR zombie apocalypse, as Vertigo Games today reveal post-launch plans in a content roadmap, featuring hordes of additional content that will be rolled out with Oculus Store cross-buy support over the next few months.

There are no less than five content drops scheduled, including weapons updates, fresh horde mode maps and epic story expansions. The first update to arrive will be the Two-Handed Weapons Update this month, allowing Quest players to go on an even more varied Fred-killing spree armed with all new weapons entirely for free, followed by a variety of FreeLC and DLC rolling out in 2020 with Oculus Store cross-buy support. 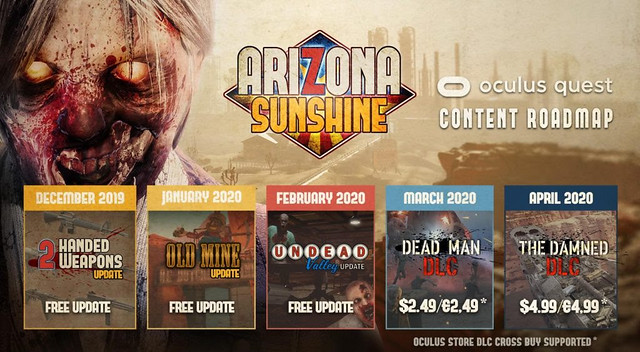 “We are very proud of what our team has accomplished from a technical perspective to bring Arizona Sunshine over to the Quest platform in a way that does the game and our new players on Quest justice,” says Vertigo Games Studio Director Richard Stitselaar. “We have pushed ourselves and the boundaries of VR over the past years and will continue to do so in 2020, with additional Arizona Sunshine content making its way to Oculus Quest. It will be a very exciting year for Vertigo Games with a lot to look forward to, including our all new VR action FPS