The Batman Arkham games have been available since the PlayStation 3 and the Xbox 360, with the trilogy ending on the PlayStation 4 and Xbox One. As Rocksteady is currently working on their next, still unannounced project, people still want to play as DC Comics’ Dark Knight. It seems as though Warner Bros. Interactive Entertainment is looking to fill that void if this Amazon UK page is anything to go by.

Amazon UK has posted listings for a Batman Arkham Collection that’s including Batman: Arkham Asylum, Batman: Arkham City, and Batman: Arkham Knight for PlayStation 4 and Xbox One. It is listed for a September 6th release. 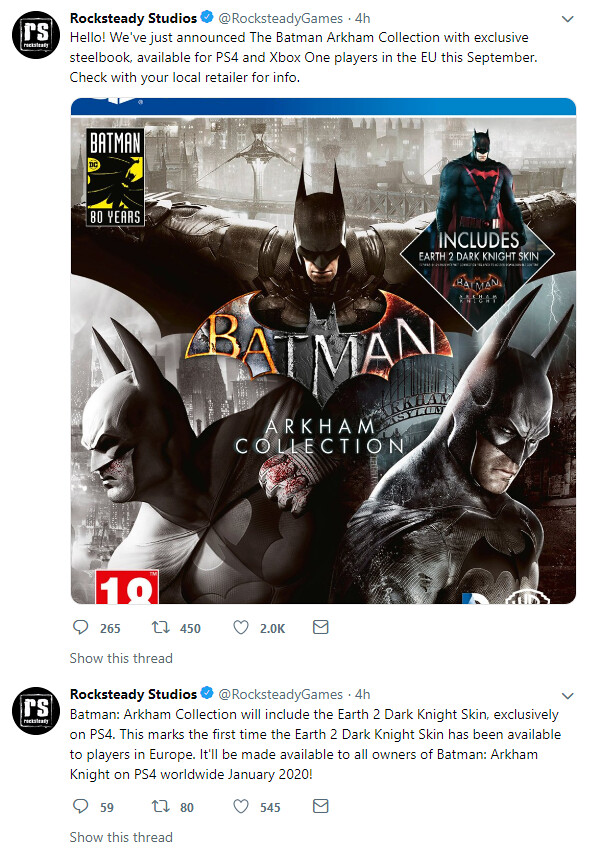 Here is Amazon UK’s collection of the description:

“Batman: Arkham Collection brings you the definitive versions of Rocksteady’s Arkham trilogy games, including all post-launch content, in one complete collection. Experience two of the most critically acclaimed titles of the last generation — Batman: Arkham Asylum and Batman: Arkham City, with fully remastered and updated visuals. Complete your experience with the explosive finale to the Arkham series in Batman: Arkham Knight. Become the Batman, and utilize a wide range of gadgets and abilities to face off against Gotham’s most dangerous villains, finally facing the ultimate threat against the city that Batman is sworn to protect … Includes exclusive Steelbook packaging, Batman Arkham: Knight GOTY game, and Return to Arkham for the first time in the UK, enjoy the Batman: Arkham Knight ‘Earth to Dark Knight’ skin exclusively for PS4.”

So far, this has only appeared on Amazon UK and nowhere else … and there has been no word yet if this is official as Rocksteady nor WB haven’t officially announced it yet. If it does get announced, this honestly would be the perfect physical edition for the Arkham trilogy, as all three games are available as two separate products on PSN and Xbox Live, as well as two separate physical copies.

For those who don’t know, the first game, Batman: Arkham Asylum (2009), focuses on Batman trying to prevent the Joker from destroying Gotham City after he takes control of Arkham Asylum, and he is forced to contend with numerous other villains he has incarcerated along the way. The second game, Arkham City (2011), is set a year later, after Professor Hugo Strange expands Arkham into a massive super-prison enclosing a neglected segment of Gotham City; Batman is incarcerated and must uncover the secret behind Strange’s sinister scheme of “Protocol 10” while slowly dying from an illness inflicted by the Joker. Then comes Batman: Arkham Knight (2015), Rocksteady’s conclusion to the series. Set one year after the events of Arkham City, Arkham Knight features Batman facing Scarecrow along with the mysterious Arkham Knight (and his militia), who have seized control of Gotham City in a plan to destroy Batman … both physically and mentally.

While there are other entries in the series, these main installments in the Batman Arkham series from Rocksteady Studios have been met with widespread critical acclaim. They’re praised for their narratives, storylines, voice acting, characters, world design, graphics, and gameplay systems and design, along with the faithfulness to the source material. While everyone waits to see what Rocksteady Studios next project is, this option might be the best series to pick up and play (if you don’t own them already).

Stay tuned for more from GamingLyfe!