MMO lovers rejoice as Black Desert Online, by Pearl Abyss, officially launches on Xbox One.
Following their success on PC, the crew at Pearl Abyss announced that they were working on a
console port of this MMO powerhouse back in 2017. Black Desert Online officially landed on
Xbox One on March 4th, 2019. Many console players were waiting to get their hands on this
game for years and now that it’s here, the servers are packed and ready to roll. However,
players have noticed there are quite a few differences between the PC and console versions of
the game.

The first thing that sets the two versions apart is that the console port is of vanilla Black
Desert Online. There are only six classes to pick from as of now: Warrior, Ranger, Berserker,
Sorceress, Wizard, and Witch. While there is a roadmap depicting which classes will be added
in the future, this creates a lack of diversity as it shifts the meta back to its roots. Where this is
beneficial though is for the new players just joining the BDO community. It allows them to ease
into the game, learn what type of play style will suit them, and doesn’t overwhelm the player with
too many options. Where this ultimately hurts is the returning players from PC or anyone who
has been following the game’s progress over the years as they don’t have access to the class
they want at the start. Regardless, the character customization is beautiful! The amount of
changes you can do to make your character unique are endless. There’s even a body-sculpting
option for those who want complete control as well as a preset option for those eager to dive
right in.

Another aspect to make note of is the gameplay shift. Since BDO was originally a PC
game, it in turn will play like one. While keyboard is an option, those without one will have to
learn the control scheme for controller. For some classes, the controller is a great fit (such as
Warrior or Sorceress). The classes that feel a little clunky or difficult are the two spell casters,
Wizard and Witch. With the controller asking you to pull different triggers and swing your analog
like a fighting game, remembering which spell was tied to which control can be tricky when in
higher stressed situations. There is also a way to map your abilities to the games “Ring” system
if the standard method is too much. This can help take the pressure off for returning players or
those who prefer a more standard MMO play style. 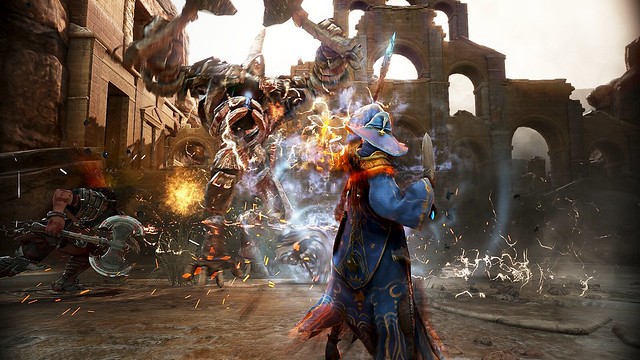 Black Desert Onlines keeps its crafting focus and life skills in tact on Xbox. BDO
encourages players with its risk and reward factor to crafting. While crafting and life skills such
as fishing are not required to be trained to play, they definitely only help you in the long run.
Crafting, while not playing too big of a role in early game, will be the deciding factor of who is
the top of the food chain in PvP later. Just be careful because if you try to upgrade your gear
carelessly, you can end up with a broken piece of armor or even a broken weapon. Life skills
can be a great source of income if you are willing to put in the time. While you can sell the items
that mobs drop when you’re farming, life skills will generate more for you in the long term (not to
mention it lets you take a break from the frontlines for a while and really appreciate how much
detail was put into the world). 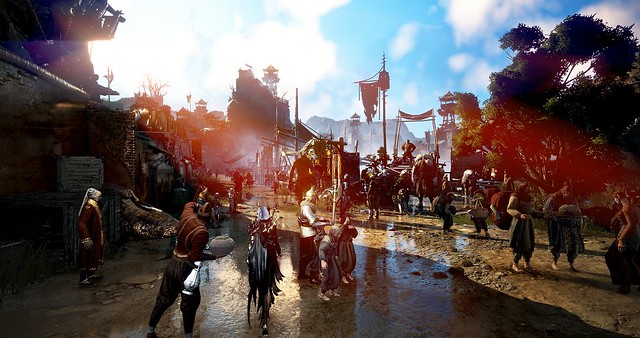 Graphically the game is beautiful with scenes that feel as if they are ripped straight out of a
fantasy novel. Unfortunately, the game has some rendering and gameplay bugs. There are
times where objects that should be showing sharp, clean detailing take a shift back to what
looks like an earlier PlayStation 2 game. This usually fixes itself pretty quickly but it is enough to
distract you and throw you off for a moment or two. There have also been a couple times that
the game failed to finish loading a path while walking on it and then was stuck running in place
(as if it were blocked by an invisible barrier). Just like the previous glitch, after a few moments
the area loaded and it was back to questing or farming. The other bug experienced was having
NPCs become a grey silhouette. There were countless times while interacting with a quest
giver, the character model failed to load and was replaced with a grey stand
-in instead. Once again, some extra time was needed and then the proper character model
would load. While these glitches and bugs can become annoying, they aren’t necessarily game-
breaking in any way. 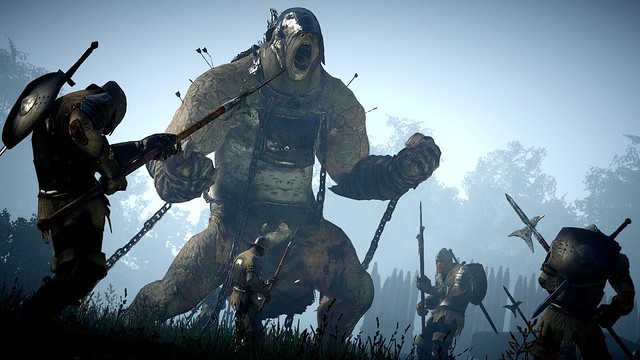 One drawback in the Xbox version of the game is the lack of Awakening. Awakening is
when a character ascends to an even stronger power to enhance their attacks (and is what
really sets each class apart). The lack of this is really upsetting to the community and leaves
most asking in chat and to the developers, “When will we finally see this?” While the developers
are working on additional content, this is something we will just have to patiently wait for.

When it comes to sounds effects, they truly add a kick to what you’re doing. You can
practically feel the weight of the ability you are using when you cast a spell or swing a sword.
The armor clanks add a certain heft as you hear the character running from place to place or
dodging out of the way of an incoming attack. The soundtrack starts off very prominent and
stoic, then slowly recedes to the background as an afterthought. I often found myself turning on
my own playlist and just listening to music as I was questing or grinding out for a few extra
levels. 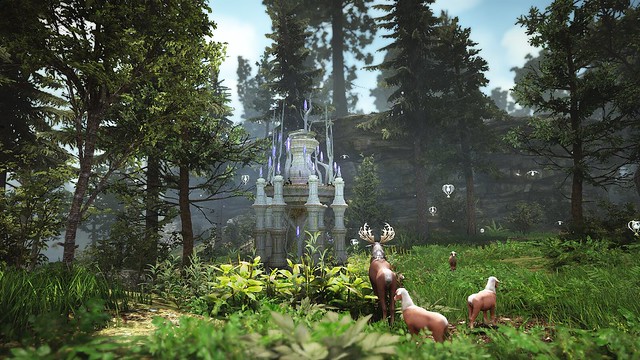 While this version of Black Desert Online is three years behind its PC counterpart, the
game is still tons of fun to play. The combat is highly interactive and once you master your
class, you begin to see the endgame potential. Where endgame here differs from most other
MMOs is there is no Dungeons or Raids. BDO takes a heavy Player vs Player draw as guilds
are designed for this. You will often see Guild Wars breaking out during your playtime, and after
you hit level 50 PvP becomes a focus. At any point you can find yourself fighting off a person or
group of people for a grinding spot. Whether it is for money, gear, or experience, players are
contesting other players for their favorite spot. This is when it’s time to show off what you
learned and prove to the other player(s) that you belong in the area you are farming. If PvP isn’t
your thing, no worries. The game prompts you to complete a quest before you can hit level 50,
so as long as you don’t complete it, you can run around all you want without the fear of another
player attacking you. 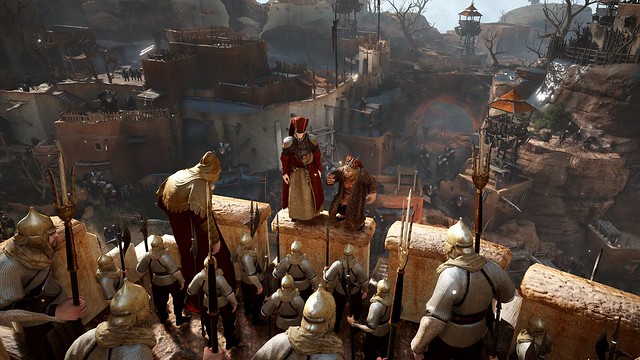 Black Desert Online has a learning curve and will only reward players willing to put the time
in to overcome it. After logging in over 40 hours of game time and creating four characters, I
realized that personally I’ve only scratched the surface of what this game has to offer. Even with all its bugs and glitches, I’m still enjoying my time inside the realm that Pearl Abyss has created.
Each character is fun to learn and I keep finding myself wanting that next armor drop or trying to
raise my offense and defense stats a little bit more.

BDO keeps giving me those jaw dropping “wow” moments anytime I find a new area and begin
to explore (even if the world is smaller and is three years behind the PC version of the game). I
honestly feel that as a newer player to BDO, the lack of this content helps the game as much as
it hurts it. It’s letting me take my time and enjoy what I’m doing instead of trying to rush to end
game. With where BDO sits right now on Xbox, I have to give it a 7/10. The bugs, while
distracting, don’t affect the game aside from physically and the missing content will be added in
time. The Mediah patch just went live on March 13, 2019 which was less than 10 days after
launch (the rate in which content is releasing is promising). If you’re looking for a good MMO
that dares you to push yourself to new limits and try something new, then this is might be the
game you’re searching for.

Written by
Alucard Achared
I live for gaming. The worlds, the characters, the relationships between them, the art, and the music. Everything about games fills me with joy. I love being able to find myself getting lost in an open world with endless opportunities to explore and just be myself within it. It doesn’t matter what the game is I will find something to enjoy. All the way from table top, to RPG, to FPS, VR, even Rhythm. Gaming is an art all it’s own and each art piece has its message. I love digging deeper and finding that hidden meaning. In the end, what really matters is having fun on the journey and the emotions you feel along the way. That’s the joy of gaming to me. Follow me on Twitter , or come hang out with me on Twitch.