The Call of Duty: Black Ops 4 Days of Summer,  the second part of Operation Spectre Rising, has kicked off today with a global community challenge giving everyone a chance to earn the Grav assault rifle for Multiplayer.

Sun’s Out, Guns Out: We’re turning up the heat in Call of Duty®: Black Ops 4 with Days of Summer; the second part of Operation Spectre Rising, which kicks off today with a global Community Challenge giving everyone a chance to earn the Grav assault rifle for Multiplayer. But that’s just the start of the party! Read on for all the maps, modes, events, and other content dropping today:

A fun challenge for the entire Black Ops 4 community is currently under way! If you’re wanting to utilize the Grav assault rifle in your Multiplayer games, the Grav Community Challenge will give players the opportunity to earn it for their arsenal.  15 million matches (across Multiplayer, Zombies, and Blackout) to earn the Grav. The challenge starts first for PlayStation 4 and begins a week later for Xbox One and PC. 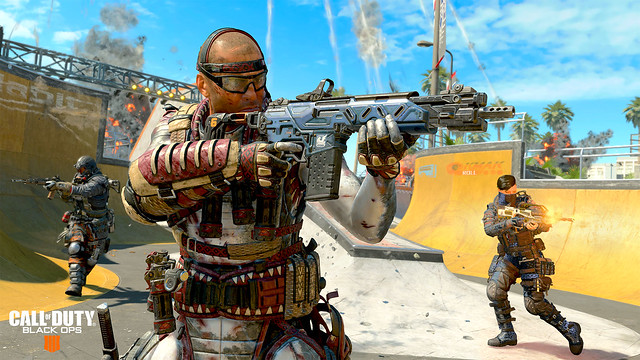 We’re, like, totally stoked to let you know the Call of Duty®: Black Ops II map Grind is back and available – for FREE – to all players! Set in a Venice Beach skate park battle through the pro shop and around the half pipe to shred the competition. Grind is a smaller map, so you’ll have plenty of chances for some gnarly firefights. 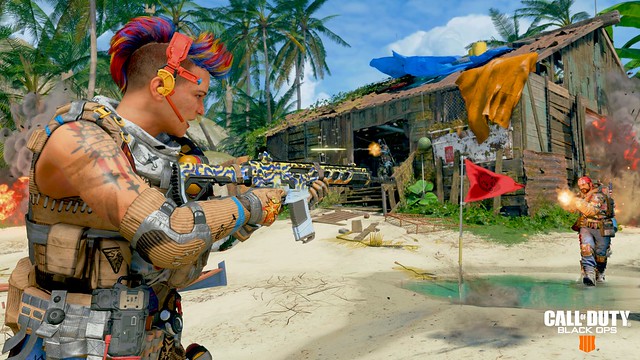 The classic Multiplayer mode, Capture the Flag, returns to Black Ops! Each team fights to defend their flag while simultaneously working to capture the enemy flag and return it to their own base. 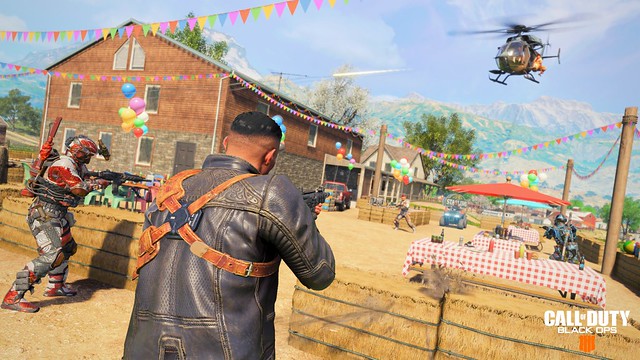 Environmental Changes: Though the Hydro Dam is still out of commission, the flood waters have receded, and the areas previously damaged by the waters are under renovation. Hijacked, the luxury boat, is moored near Nuketown Island’s cove, and the entire map is now bathed in sunlight! It’s midday, there are blue skies, there’s summer foliage with greenery and flowers, and there’s a party atmosphere across much of the map:

Check out BBQs, some lawn ornaments, party balloons, pool floaties, as garden parties begin in earnest. Down by the beach, there’s camping, umbrellas, and towels draped over the sand. Not all of this is purely cosmetic either; there are some light summer activities to enjoy:

There are also a few new gameplay elements:

For starters, players can now hold the USE button to reduce the time spent downed. Consider utilizing this in redeploy modes (like Alcatraz or Down But Not Out) to quickly get back into the action.

Perks in Killcams: If you’re brought down by a rival in Blackout, you’re now able to see if he or she was using any active Perks; as these are now visible in the Killcams.

New Vehicle – Attack Helicopter: If you’re playing the new Ground War Blackout game mode (see below), you can ride in style; specifically, in a helicopter with two turrets. Rain down hell from above courtesy of the Attack Helicopter! 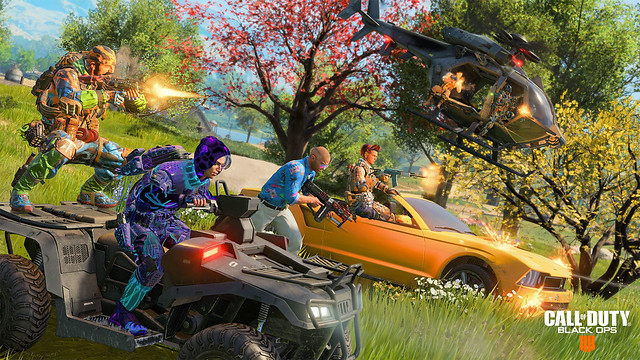 Take two large teams of players and drop them into opposing platoons. Each platoon is made up of numerous squads, and squad-mates have their names marked overhead, while platoon mates have friendly markers overhead. Players in a platoon can revive each other (even if you’re last alive in your squad and downed).

Now the Ground War begins! Each platoon can choose one of two main infiltration paths that intersect the main circle. You can drop along your team’s flight path or head directly to the enemy.

The initial circle size is around one third of the entire main Blackout map for quick and chaotic engagement between dozens of opposing players at once! As the mayhem continues, the circle reduces in size as normal. You’re able to redeploy if your squad is alive, right up until the final circle. The last platoon surviving wins in this epic new Blackout mode! 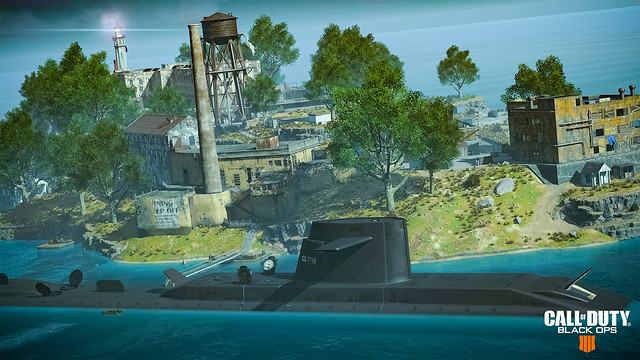 There are two new destinations, Submarine and Shipwrecked, on the Alcatraz map (scheduled to arrive on June 11 to PlayStation® 4 owners, with other platforms to follow), which adds a further layer of action and complexity to your Blackout matches on this island prison.  Currently docked along the northern edge of the island is the Icebreaker submarine. Over on the south side is a shipwreck you might recognize from Contraband. And useful for piloting between these two areas is the Tactical Raft, allowing water-based action around the perimeter of the prison. 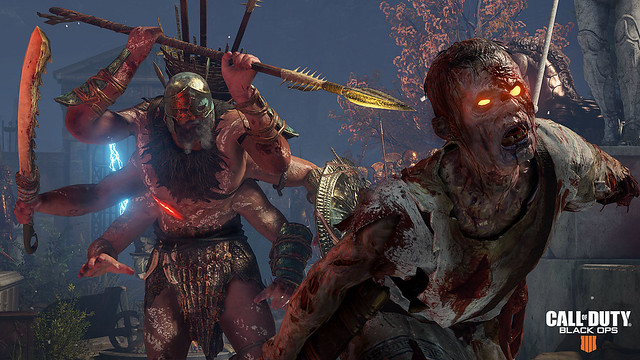 New Gauntlet: Zombies fans should prepare for a challenge; a 30-round one in fact! The Labours of Hercules Gauntlet takes place in “Ancient Evil” and has an even mix of might and myth to test your skills.

New Gauntlet Friends Leaderboards: Dying to see how you stack up against your friends? Check the leaderboard and compare your best Gauntlet runs.

New Elixirs: Need a new pick-me-up? Then utilize one or more of the following:

New Weapons: Now, found in the Mystery Box in Zombies are the Peacekeeper, Ballistic Knife, and S6 Stingray. New MKII weapons for the Rampage, VAPR, Switchblade, and Spitfire join Zombies so you can rack up the XP. 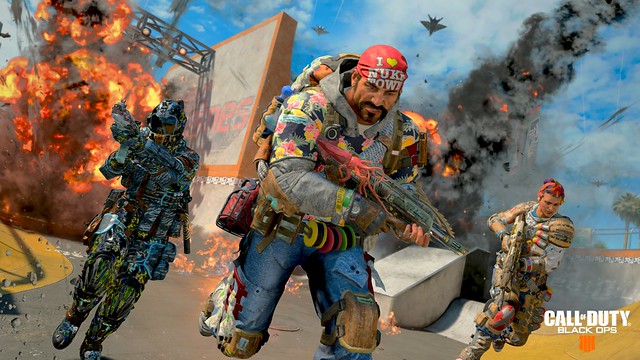 Tier Highlights: Available for the rest of Operation Spectre Rising, discover 50 new tiers of fresh items in the Contraband stream. Players can earn a Weapon Bribe at tier 25. Weapon Bribes are dupe-protected, ensuring you get a new weapon from Reserves to add to your arsenal. Have all the weapons from the Reserves already? Don’t worry; the Bribe can be opened during a future Operation when more weapons are added! Plus, tier 50 grants you the Vendetta Sniper rifle.

Thinking about pre-ordering Call of Duty: Modern Warfare? Then check out two ways to earn in-game rewards in Black Ops 4:

Prestige Token*: If you pre-order any digital version of Call of Duty: Modern Warfare from the Sony (PlayStation® 4), Microsoft (Xbox One), or Battle.net (PC) stores, you’ll receive a Prestige Token to permanently unlock any Create-a-Class item for Black Ops 4.

Reserve Cases: If you pre-order the Call of Duty: Modern Warfare Operator Enhanced Edition directly from the Black Ops 4 in-game store, you’ll receive five Reserve Cases for Black Ops 4. These are redeemed in the usual manner.

If you’re new to Black Ops 4, there’s never been a better time to dive right in with the Black Ops 4 – Spectre Rising Edition. Purchase the digital edition to receive the following: