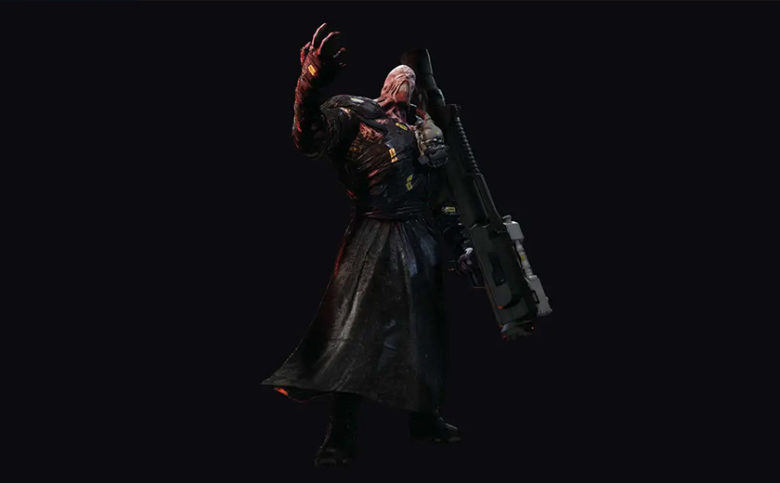 Capcoms Kiyohiko Sakata, director of Resident Evil 3 shed some light on updating Nemesis for both RE3 and the Resistance online multiplayer game via PlayStation blog. Nemesis praised as one of the most memorable enemies in RE history will now be playable in RE Resistance and RE3 in the update that introduces Nicholai Ginovaef as a Mastermind. Nicholai a powerful character of his own will have the ability to summon Nemesis which adds a completely new skill set to terrorize survivors, this marks the first time Nemesis has been playable in a RE game. 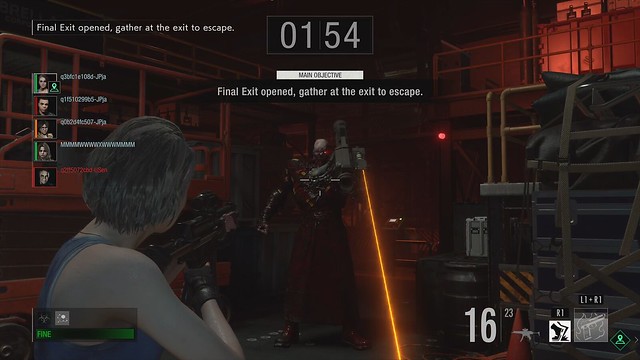 Where does Nemesis project research fit into Umbrella’s overall company plans at the time of RE3? Is it their crowning achievement at the time, a side project, etc.?

The Nemesis project was to artificially create a parasite that was discovered in the wild, thus giving birth to NE-α. The idea was to find an appropriate live host that could contain NE-α, which in turn would physically change and transform its host into a bioweapon. However, the reality was no host could contain the power of NE-α, nor was there any means of regulating it. As a result, the project was inevitably put on ice.

In the meantime, the American branch had finished their creation of the Tyrant bioweapon utilizing the T-virus, to the point that they were able to send it into actual field tests. Feeling the pressure, Umbrella Europe decided to utilize Tyrant as a base for creating Nemesis.

The Nemesis project was very aggressively pushed forward and managed to achieve results, but NE-α needed to be regulated through a fitted chest piece on the host, as well as equipped with restraining gear to stop it from going rogue while in the field.

Nemesis still utters the classic “S.T.A.R.S.” line while pursuing Jill. Was there any consideration to remove Nemesis’ speech altogether, or give it even more lines?

In the early development stages, we definitely considered adding more dialogue to showcase its heightened intelligence. Halfway through, there was also a phase where we thought too much dialogue would make Nemesis less scary, so we had considered the option of having it not speak at all. At the end of the day, part of Nemesis’s fear factor is its relentless pursuit in eliminating all S.T.A.R.S. members, so we left the “S.T.A.R.S.” phrase in there as a means of conveying that to the player. 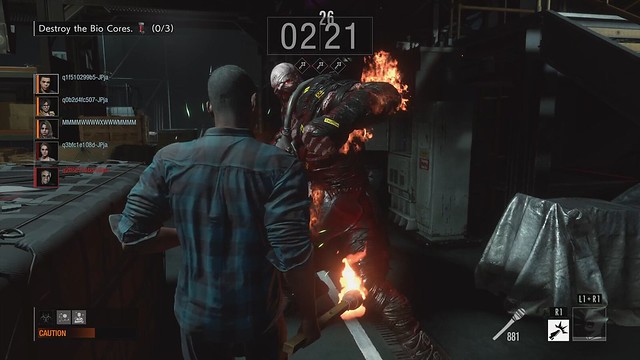 Nemesis begins the game almost entirely covered in black material, almost like a body bag. Can you please offer insight into this aesthetic change, the decision behind it, and how that material is damaged throughout the game?

Nemesis is not a completed model, but a prototype. The black material is not Nemesis’ official attire and was restrictive gear that was haphazardly, quickly created to contain it, which is why it has such visuals. We were hoping to create an aesthetic contrast between Nemesis and Tyrant from Resident Evil 2, who has a more completed and finished look.

Nemesis can now infect zombies with parasites. What was the Capcom dev team hoping to achieve with this change, both from a narrative and gameplay perspective?

This was implemented as a means of differentiating Nemesis from Tyrant in Resident Evil 2. We wanted Nemesis to come across as an even more formidable opponent, so we started considering alternate abilities aside from its heavy weapon artillery.

We inevitably decided on this final ability due to the presence of Ganado in Resident Evil 4. Ganado are humanoid enemies that are created through being infected with the Plagas parasite, the original basis for NE-α. When the Plagas activates, it spawns from the neck of its host in the form of a tentacle. NE-α was created to imitate this parasitic quality. We wanted NE-α infected enemies to be visually similar to the Plagas-infected Ganados as a means for fans to piece together how Nemesis fits within the whole Resident Evil franchise. While this was the design and background for Nemesis in this reimagining of Resident Evil 3, we should note that Nemesis was not designed with this in mind in the original Resident Evil 3: Nemesis. 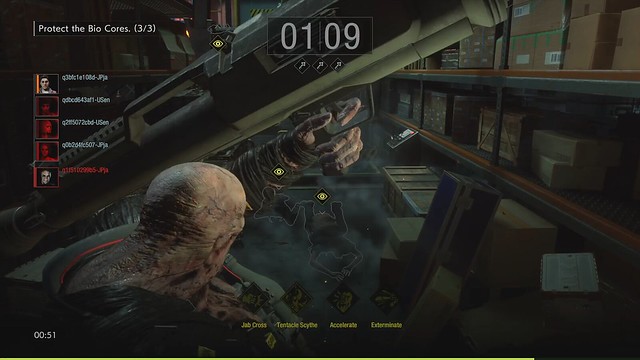 Nemesis undergoes an even more dramatic transformation with Type 2 in the RE3 remake compared to the original game. Please discuss the goals and inspirations behind its Type 2 design.

Nemesis’ transformation into Type 2 occurs when it’s badly burned and falls into the water. Is there something specific about this combination of events, from a RE pseudo-science perspective, that leads to the form of Type 2?

There are so many good players online! You tend to see players utilizing the dodge mechanic to fight both Type 1 and Type 2. However, the concept of Type 1 was very much all about running away, rather than fighting. Type 2 was designed with higher speed, so fast that the player would not be capable of escaping it. The intention was to have the player switch from running to fighting in this stage. Even though Nemesis’s speed has increased, it lost some intelligence, so we wanted Type 2 to be a fight where players would better understand Nemesis’ movements and have a fighting chance of defeating it. 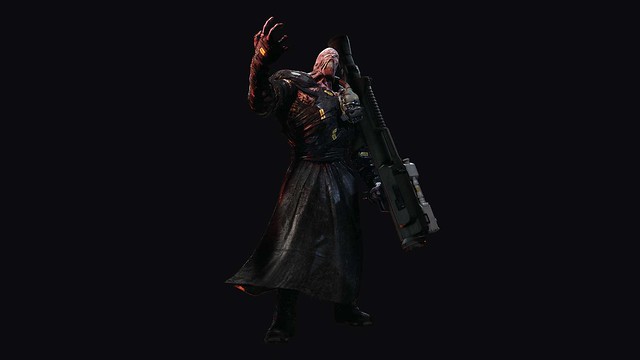 What makes Nicholai a good fit as a Mastermind in Resident Evil Resistance?

As the mastermind behind the incidents in Resident Evil 3, Nicholai’s cunning personality and willingness to do anything for the right price makes him a perfect fit for a Resident Evil Resistance Mastermind. Nicholai has been on the list of potential Masterminds since the very early stages of development.

What tools does Nicholai have at his disposal as a Mastermind?

Nicholai is good at using firearms and tracking his prey. In Resistance, this translates into useful skills with camera-mounted firearms and abilities that allow him to track the Survivors around the map. He can also control Nemesis to hunt down Survivors, complete with an array of signature skills to use to hunt down his targets.

How does Nicholai distinguish himself as a Mastermind when compared to the rest of the roster?

Compared to the other Masterminds, Nicholai has more firearm and tracking skills. He’s different from Spencer in how Nicholai’s Exclusive Cards gives him a wider variety of firearms to choose from, and how he’s able to track Survivors and see their actions behind walls. Nicholai’s biggest unique selling point is of course how players can control Nemesis and experience its terrifying power for themselves. 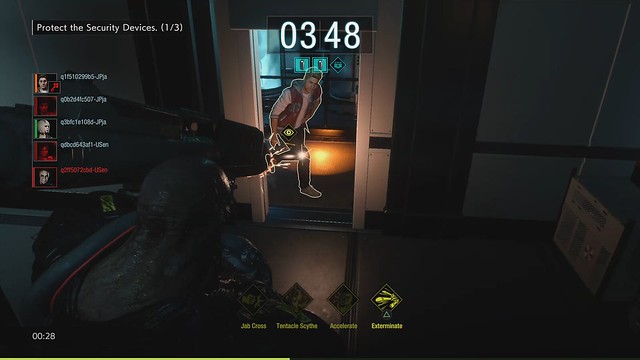 How does Nemesis stand out from other Mastermind bioweapons in Resident Evil Resistance?

Nemesis moves at a surprisingly fast speed, can deal multiple attacks using its tentacles, and emits a blood-curdling roar that stops Survivors in their tracks for a set period of time. Compared to G-Birkin and the Tyrant, Nemesis has more ranged attacks.

Nemesis takes on many forms in Resident Evil 3 which changes both its appearance and actions. In Resident Evil Resistance, we choose to use the most widely-known humanoid form and tried to design its skills in a way that will best resonate with people who have played Resident Evil 3.

Nemesis has many weapons and tools at his disposal. How did the team land on this specific loadout for Resident Evil Resistance? 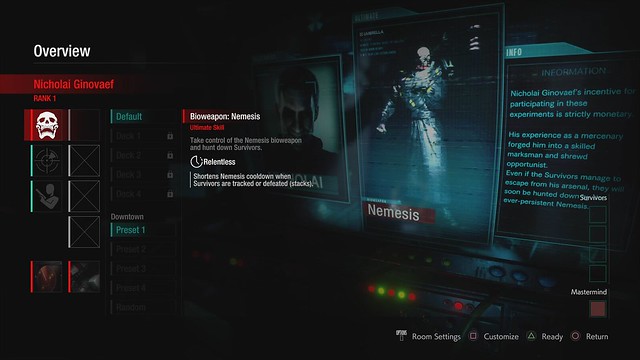 The team evaluated all the attacks Nemesis has in Resident Evil 3, and derived its Resistance skills from the ones we think would feel the most satisfying for players to use when controlling Nemesis. It has a tentacle attack, a dash, and, of course, an ultra-powerful Rocket Launcher. Lots to look forward to!

What tips do you have for succeeding with Nicholai and Nemesis as a Mastermind?

Try shooting your opponents when they are not paying attention. (Laugh) After the game’s been released for some time, Survivors will become very aware of where the cameras are placed, so defeating Survivors with firearms will no longer be easy. Even though Nicholai is a firearms expert, equipping only firearm cards might not be the best strategy. We suggest including fast creatures to distract Survivors, use skills that hold them in place, equip automated firearms to draw their attention, then ambush them from behind for optimal efficiency. In addition, if the Survivors are gathered together, the adrenaline rush players can get from wiping out an entire team of Survivors using Nemesis’s Rocket Launcher is definitely a Nicholai-exclusive experience.

What tips do you have for Survivors trying to survive against Nicholai?

Don’t wander off alone, communicate with each other and stay alert and agile. The Mastermind’s cameras rotate at a fixed speed, so we recommend players practice how to move around while firing weapons when targeted by camera-mounted firearms. We also strongly suggest melee-focused characters like Tyrone and Sam buy at least one firearm to use against cameras. Nicholai’s firearms can deal a considerable amount of damage, making him very hard to defend against when alone and without support. Cameras also have a shield that prevents them from being disabled again for a period of time after they recover. When players see cameras protected by an Electromagnetic Shield, the best strategy would be to retreat or find cover! 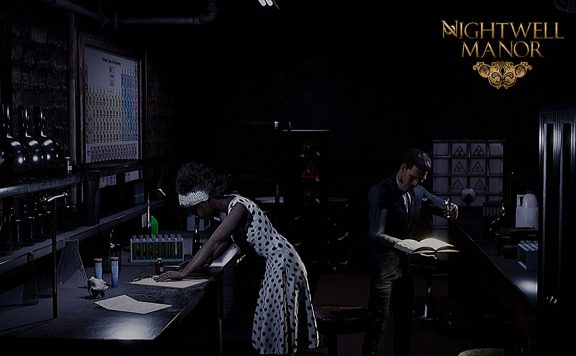 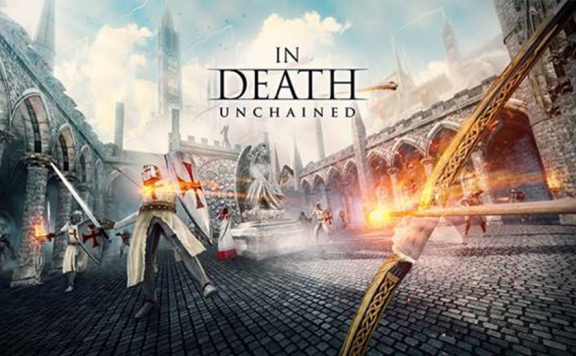 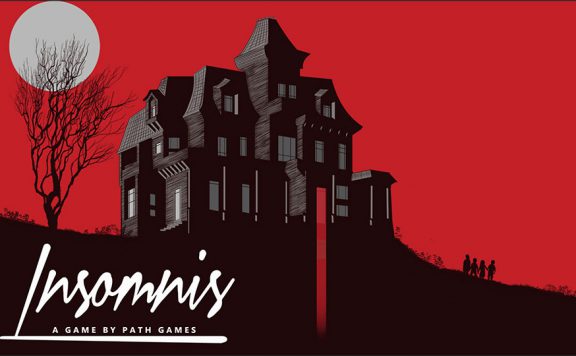 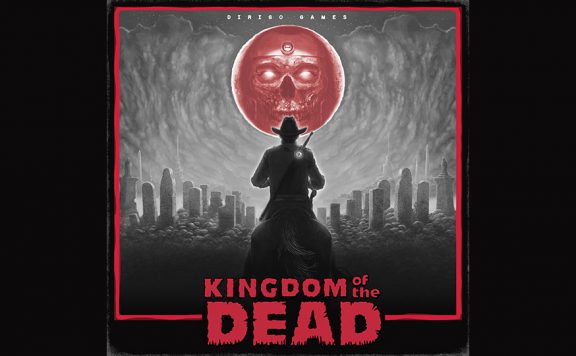