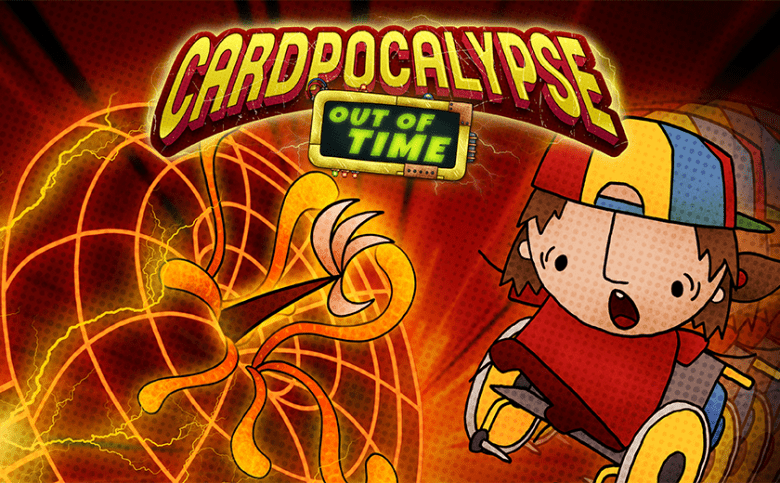 Complementing its arrival on Steam, Cardpocalypse also introduces a brand new DLC pack titled Out of Time, available today for PC, Xbox One, Nintendo Switch, and PlayStation 4. The new DLC brings a brand new standalone campaign to Cardpocalypse and features the voice over talents of Irish actor Liam Cunningham, Game of Thrones, Dog Soldiers, War Horse. In the new DLC, Cardpocalypse protagonist Jess has been hurled into a time loop, forcing her to relive the same school day over and over. Jess joins forces with Bloop, a brand new Champion card character, and together they set about escaping the time loop and saving the world. Bloop is the game’s first neutral Champion, able to be used with any card faction, and is also uniquely upgradable. Out of Time also introduces new cards to collect, which can be used in the base game’s Gauntlet Mode.

Cardpocalypse and Cardpocalypse: Out of Time launch just in time for the Versus Evil 7th Anniversary celebration, with a 40% discount for launch week for the main game, DLC and soundtrack. Players can purchase all three together in the Time Warp Edition bundle, available at participating retail.

Cardpocalypse is set in elementary school in the 1990’s and tells the story of Jess, a 10 year old kid who manages to get everyone’s favorite card game banned on her first day at school. Players can custom build their own decks and can also manipulate their card decks, change rules and permanently alter cards in their quest for victory in the hope of becoming a Mega Mutant Power Pets master, the base game also comes with the rogue-like-inspired Gauntlet Mode.

“The creative minds at Gambrinous have crafted a true gem in Cardpocalypse. CCG players love the game’s card modification and deck customization mechanics, it’s the freedom they’ve always wanted in their card games, but all wrapped up in a clever, endearing story-led RPG. With Out of Time, we’re introducing brand new gameplay twists, giving players even more of the freedom for invention and experimentation that they loved in the first place,” said Versus Evil General Manager Steve Escalante.