From the top of Mount Morta to the endless winter of the post-apocalypse, publisher 11 bit studios is excited to shout out loud that their 2019 flagship games — Frostpunk, 11 bit studios’ own production, and Children of Morta, developed by Dead Mage — are heading to consoles and now available to pre-order! Both games are available in digital versions, a regular retail version, and in one-of-a-kind limited Signature Editions prepared by Merge Games.

Frostpunk: Console Edition — an icy city-builder and survival game in one, where you rule a society while leading it to endure a frozen apocalypse — releases on October 11th and can already be pre-ordered on both the Xbox Store and PlayStation Store. PSN will even lead off with a 10% discount off the regular price of $29.99 USD. Frostpunk: Console Edition has been rebuilt from the ground up exclusively for consoles.

Children of Morta — an action RPG with rogue-lite gameplay and hack n’ slash battles featuring a family of courageous heroes — hits consoles four days later on October 15th. It can be also pre-ordered on the Xbox Store and with a 10% discount on the PlayStation Store with the regular price standing at $21.99 USD. The Nintendo Switch version will be releasing on the same day with pre-orders arriving soon.

Available in a regular boxed retail edition, 11 bit studios has gone even further for fans of collector editions and partnered with Merge Games to deliver two Signature Editions. These limited Signature Editions contain beautiful artbooks, enamel pins, and lots of other goodies. All box versions of Frostpunk — Xbox One, PlayStation 4, and PC.

Children of Morta, conquering even more platforms, has prepared retail editions for Xbox One, PlayStation 4, Nintendo Switch, and PC with all version available to purchase. 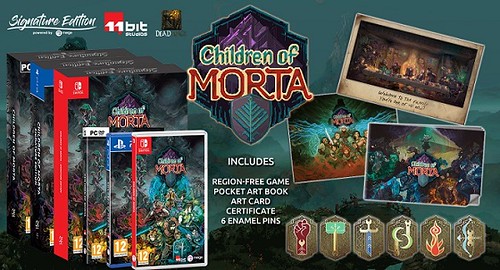