Klabater announced plans to expand its debut title – Crossroads Inn, whose production costs refunded in the first week of its sale. The interest in this tavern simulator keeps growing, and the current wishlist amount of new interested users passed the 120,000 mark. Currently, the studio is working on previously announced expansions and porting the game to Windows Store, Xbox One and Nintendo Switch platforms. The release of console version is scheduled for 2020.

The popularity of Crossroads Inn increases daily, which is confirmed eg. by the fact that it was in the group of 20 best products released on Steam in October, when taking into account the revenue obtained during the first couple of weeks from it’s release date.

– We consider this result a great success, especially since our game was released during a commercially difficult fourth quarter, only a week before the end of october, and had to compete with the biggest releases of the season and multiple sales. The players are constantly talking about our world and create their own content by using the editor, which will shortly become compatible with Steam Workshop – states Robert Wesolowski, Joint CEO in Klabater.

Klabater also confirmed their long-term goals about further development of the game’s universe. In the year 2020, the company will share new events for the game’s community and additional language versions, which will expand the target audience market. There are also plans to release four free DLC and five paid expansion packs, like Pests & Puppies or Tax Collector. 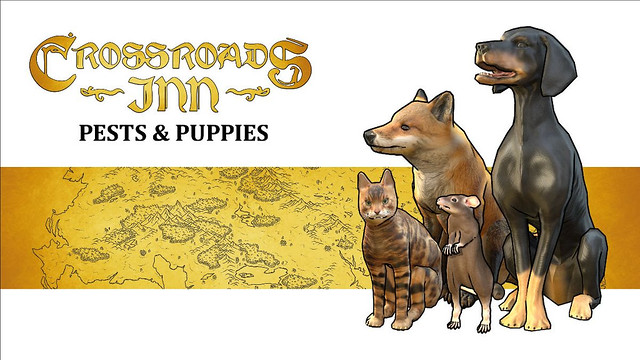 First of all, in january, a first expansion called Pests & Puppies will make its debut and introduce house pets, for example dogs that guard our tavern’s premises, or cats, who will take care of annoying pests like rats or mice. The players will be able to join forces with the animals, which will improve the process of tavern management. They will also scare intruders away! The expansion contains, among others, 5 races of dogs and 6 races of cats, which can be chosen depending on the preference of our tavern’s guests. Wild animals like boars or foxes will also be introduced, not to mention annoying pests like louses, which will attack the clients.

For the end of the year, an expansion called Tax Collector will be released, and it will focus on paying taxes and the role of a tax collector.

– The first couple of weeks have confirmed our assumptions, that Crossroads Inn is a game from which the fans expect new content and long-term development. 2020 will be key for us from the perspective of working on our brand. Other than multiple already announced expansions, we also plan to add new language versions: french and spanish during the first half of the year, and two others in third and fourth quarter of 2020. Additionally, we’ve prepared a few technical news for our game, like Twitch integration, new scenarios and challenges for the innkeepers. – informs Łukasz Mach, Marketing Director of Klabater.

This week, Klabater will release a large, very anticipated update, which will enable Mac support. Soon, the developers of Crossroads Inn will add Steam Workshop integration, which will enable modding the game, and further gameplay improvements.

The company’s porting team, together with Kraken Unleashed developers, started working on Xbox One, Nintendo Switch and Windows Store versions of Crossroads Inn. The game will be available on consoles in 2020. – This is an answer to a common request of our players, and a possibility to enter a completely different market for our product. I’m hoping that this game, which is very ambitious from the perspective of gameplay and mechanics, will be a natural choice for players who are looking for something fresh on the console market. On PC, the game did very well in the US market, and we’re hoping that it repeats its result on Microsoft and Nintendo consoles. – adds Wesolowski.

The company is especially happy about large contribution from players in the USA and Germany, which confirms the pre-release assumptions and underlines the effectiveness of its marketing operations. Adding french and spanish language versions will enable an increase in marketing activity on these territories and enablement of sales in the upcoming months.

Crossroads Inn is a mix between a sophisticated management simulation game and story elements known from role-playing games. The player takes a role of a tavern owner, located in the heart of conflicted land of Delcrys. His job is to hire and train competent workers, manage shipments, create new recipes and create a menu that accommodates the incoming guests.

Important information about the game’s release: