Leading global independent development studio Behaviour Interactive today announced that Dead by Daylight Mobile will release in Spring 2020 in the Americas and EMEA. Today marks the launch of the game’s Google Play pre-registration campaign. Behaviour also confirmed its partnership with NetEase Games, who will act as the publisher for the asymmetrical multiplayer horror game in Japan, South Korea, and Southeast Asia.

Dead by Daylight is a 4v1 multiplayer horror game in which one crazed killer hunts four friends through a terrifying nightmare. In a deadly game of cat and mouse, players can take on the role of iconic killers or try to survive brutal trials. The game has over 15 million players worldwide on PC and consoles. Dead by Daylight Mobile will be fully optimized and offer the same gameplay and modes that fans enjoy, with new controls and experience carefully crafted for mobile devices. 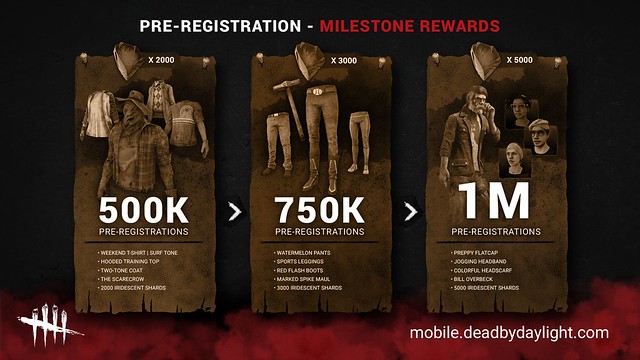 “Our fans have been eager for the launch of this title since we first announced it and we’re happy to say our early adopters will be rewarded for their support and dedication. We’re delivering a fully-fledged and definitive product on iOS and Android devices and fans can expect complete support and great content for a long time to come.” said Mathieu Côté, Game Director.

Players who sign up for Dead by Daylight Mobile pre-registration will work towards the following in-game rewards:

1 0
Previous ArticleThe Wreckfest February Update is out now on all platformsNext ArticleHidden Through Time comes out of hiding on March 12th!