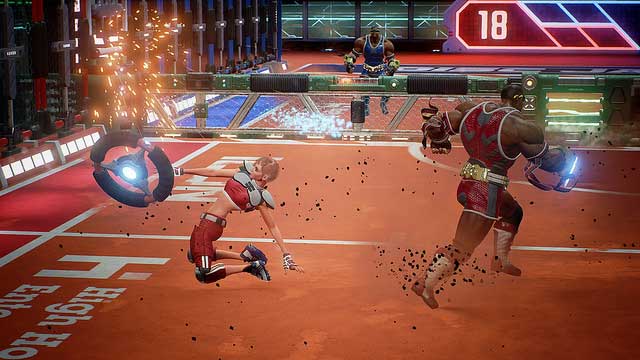 Hey folks! Tim and Jay here from High Horse Entertainment. We’re thrilled to announce the online beta test for Disc Jam, an action sports game for 1-4 players! During our alpha phase, the top two requests we received were “Please do a PS4 Beta!” and “Please add doubles!” So today, we’re announcing both! 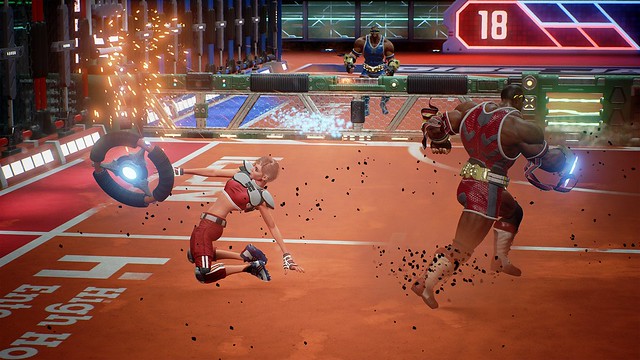 Throughout development, it’s been critical for matchmaking that we only offer the singles mode (1v1) to help players around the world find opponents with a good connection. Now that Disc Jam is nearing completion, and with the hopes of getting some solid stress testing on our network, we are activating singles and doubles for the PS4 beta. In addition, we’ve made some exciting new changes to the mode including an updated court, as well as a complete overhaul to the pass mechanic.

When we initially implemented doubles, we wanted to see whether the mode would be fun in exactly the same play space as singles. Our assumption was that the additional player would add tension to the frantic pace on offense. With the passing mechanic, players could set up more powerful offensive shots which we believed would compensate for the extra defender.

This was true for the most part, but it became quite clear during high-end tournament play that some adjustments were needed. The singles court was simply too small to make defending your end zone as challenging as it should be. After some tweaking, a simple widening of the court by a few feet proved to be a simple and effective solution. This small adjustment to the play space compensates incredibly well for the extra player (not unlike the sport of tennis).

Another issue we had with doubles was the first implementation of the pass mechanic. Our main problem was that there wasn’t any significant punishment for poor timing on a pass. This basically created a situation where passing was always the optimal strategy. It slowed the game down and directly opposed our key design pillars: positioning and timing. 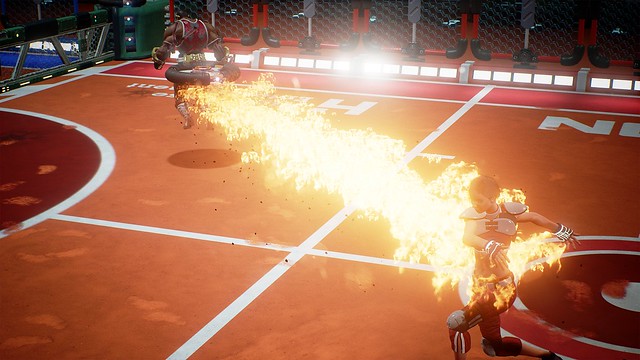 To address this, we redesigned passing so that your timing is graded just like the other throws in the game. Your teammate can now only throw as hard as the incoming pass, so a poorly timed pass to your teammate at the net will severely hamper their offensive power. With this new implementation, choosing to pass is a much more strategic decision which includes a layer of difficulty that the previous mechanic lacked. However, if executed properly, the pass mechanic is still quite powerful, enabling teams to charge the net and maximize their offensive potential!

It has been very important for us that singles and doubles each feel like first-class citizens in Disc Jam. We want to ensure that both modes remain competitive and that both lone wolves and team players have a home. So far, we have heard great feedback on both modes with many players gravitating to one or the other, but enjoying both. We believe these simple yet game-changing updates have made doubles a unique experience without straying too far from Disc Jam’s core gameplay. Of course, we may just have our “developer blinders” on, so we hope you’ll join us in the beta and share your thoughts!

We are accepting signups for the Playstation 4 beta on our website so sign up today and give it a spin!