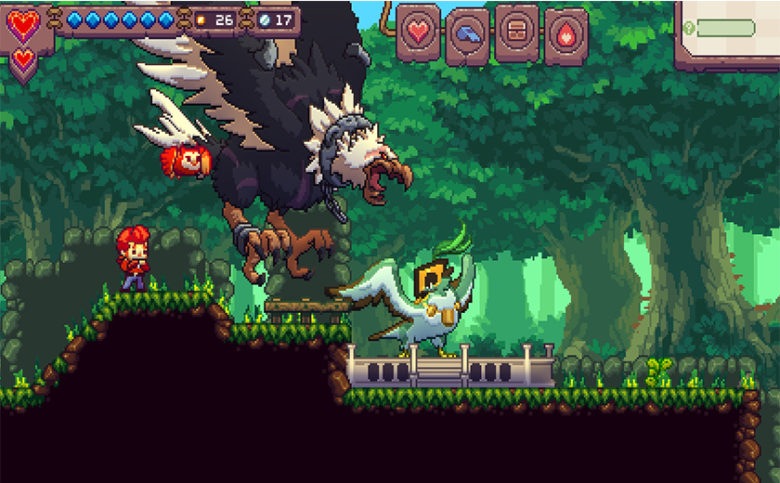 Eagle Island soars into the EU Nintendo Switch eShop this week after winning the MomoCon 2019 ‘Indie Game Showcase’ in Atlanta, GA, earlier this year and releasing Nintendo Switch NA and PC on July 11th. Reviewer and player reception has been mixed due to Eagle Island’s unique challenges and restrictions.

Pixenicks and Screenwave Media Games, UK-based first-time developer and indie publishing studio, respectively, are proud to bring a retro-inspired, character-driven game that boasts a wide range of accessibility options to market. However, this does not mean the game is easy.

After a strong, “one of the best demos I’ve ever played,” headline from Destructoid in 2017, Eagle Island celebrates being “a modern masterpiece,” according to Steam Curator The Metroidvania Review. Let it be known, “Eagle Island is a game that requires players to have intricate perfection as a prerequisite,” according to ZeroLives, ala Rogue Legacy, Dark Souls, and Banjo and Kazooie.

With more additions on the horizon, thanks to player feedback during the US launch, the current list of in-game accessibility options include:

Players take control of Quill, who partners with their owl-companion Koji in search of Ichiro– abruptly stolen by the island’s giant eagle deity, Armaura. Players will leap, cast, and uncover the secrets of Eagle Island‘s mysterious past while in hot pursuit of their friend. Eagle Island‘s endearing narrative is supported by whether playing the “Official Seed” for speed runs, taking a more casual approach, or fine-tuning the perfect speed run with the ability to create millions of uniquely generated levels. Welcome to Eagle Island!

0 0
Previous ArticleOculus reveals the first look of the TARDIS in Doctor Who: The Edge of TimeNext ArticleNintendo Brings Fun Games to San Diego Comic-Con