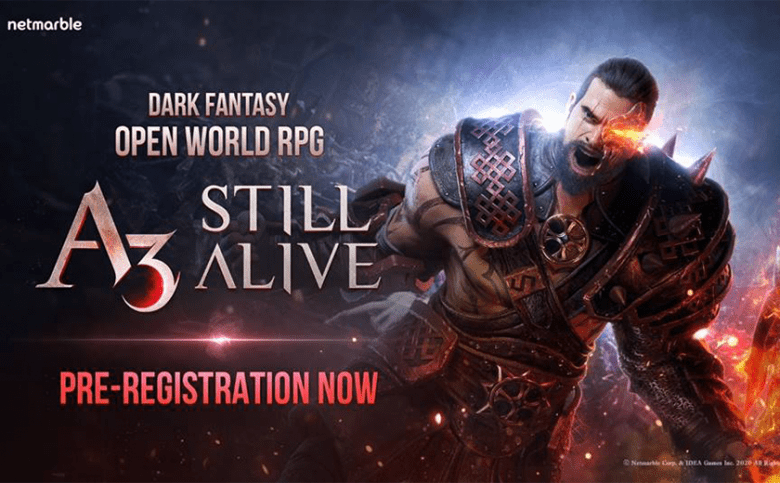 Netmarble Corp., of the fastest- one growing mobile game companies in the world, is set to unleash a beautifully dark world of strife, conflict, and turmoil to players with the world reveal of A3: STILL ALIVE. Pre-registration is now open for the App Store® and Google Play™, as a series of high-value and powerful items are available for those who dare to pre-register and experience the twilight fantasy adventure.

Based on Netmarble’s original A3 online PC game from South Korea, A3: STILL ALIVE is a cross-genre mobile experience that pairs the enormous and living worlds of Open-World RPGs with the extreme combat of Battle Royale. Set in an apocalyptic fantasy world of swords and sorcery, players must be vigilant in an always-open Player vs. Player (PvP) environment as they fight against enemies with intense hack & slash combat in the search for powerful gear.

Players can prove their mettle with a variety of PvP and Player vs. Everyone (PvE) engagements including Castle Siege, Dark Presence and World Boss Content. To complement the extreme combat, A3: STILL ALIVE is beautifully rendered with splendid console-quality 3D graphics that are brought to life thanks to the outstanding optimization of the Unity Engine.

“A3: STILL ALIVE was first released in the Korean market and gained great popularity, ranking first in the App Store and Google Play downloads. Global version will complement the Korean build to provide more high-quality features and services. We feel now is the perfect time to reintroduce what makes the game so special with the global release of A3: STILL ALIVE”, said Joong Sun Chang, Executive Producer of Netmarble, “Thanks to the integration of Battle Royale’s intense combat-centric elements, the dark and dangerous world of A3: STILL ALIVE has never been more fully realized, and we anticipate many will gravitate towards the title at launch.”

Starting today, pre-registration begins worldwide for players, with rewards such as:

Players can also earn points on A3: STILL ALIVE’s website, with up to 12 points offered if they pre-register the game on the website or through the App Store or Google Play, if they share the promo video on social media, and if they invite friends for pre-registration. Points can be redeemed for a chance to earn rare in-game items and others including:

A3: STILL ALIVE is available for pre-registration in the App Store and Google Play, in 172 countries around the world.