Today, Ubisoft announced that For Honor will kick off a free weekend today through July 26, available now for PlayStation®4 computer entertainment system, the Xbox One family of devices, and Windows PC. Free Weekend players will have full access to the Standard Edition of For Honor, which includes the story mode, all multiplayer game modes, 26 heroes, and 30 maps. 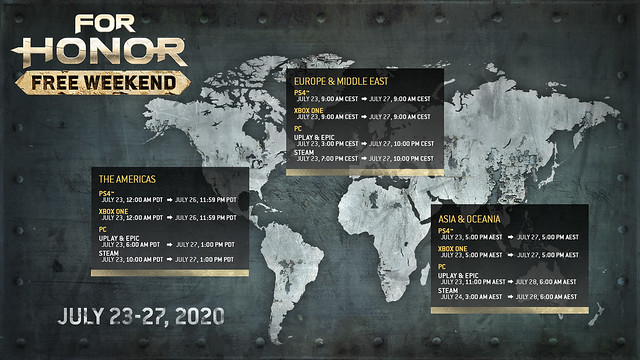 Starting today, For Honor will be free to download and play until July 27 at 1 PM PDT on Uplay, Steam, Epic Store and July 26 at 11:59 PM PDT on PS4 and Xbox One. Players who want to keep battling after the weekend ends can carry on their progression and heroes to the full version of For Honor, which will be available to purchase for up to 80% off on Steam (until July 27), Uplay (until July 30), Xbox One (until August 3), the Epic Store (until August 6) and PS4 (until August 19).

Additionally, For Honor just kicked off A Tyrant’s Test, an evolution of the fan favorite Test Your Metal PvAi game mode that will unleash some of For Honor’s darkest heroes.

This event will lead into the release of a large Title Update on August 6, which will add the new Warmonger Hero. Players will be able to unlock the new Hero either by purchasing it on first party store as part of a package including new Hero, 1 exclusive Ornament, 1 Elite Outfit, seven days of Champion Status or only the Hero with 15,000 steel on August 20.

To help players take on Heathmoor’s most challenging threats yet, For Honor will also be updating its combat experience with the core combat update, implementing a series of sweeping changes to the gameplay experience geared towards a more offensive play style.

SPIDER HUNTING ACTION GAME KILL IT WITH FIRE OUT NOW ON PC!
August 13, 2020