Horizon Chase Turbo gets a new campaign tailored for new players in celebration of its first anniversary on Nintendo Switch and Xbox One. Bring your friends and family together into Rookie Series, a free DLC arriving today for all platforms: Nintendo Switch, PlayStation 4, XBOX One and Steam (on the European PSN, the DLC will be available beginning December 2nd).

The new campaign is directed at young and inexperienced players, as it will teach the game basics in a welcoming environment, where they can evolve at their own pace. With no leaderboards, collectible coins nor fuel management, the DLC lets players focus on learning the main aspects of racing. 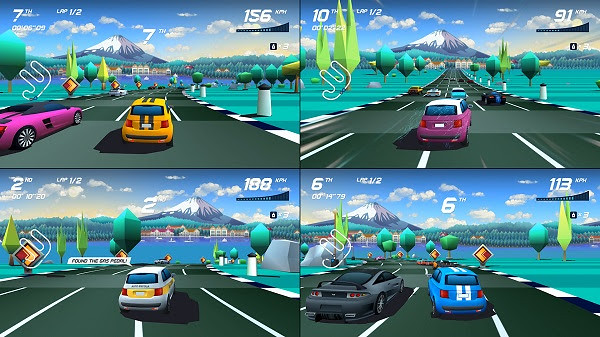 ROOKIE: A PERFECT CAR FOR BEGINNERS

Horizon Chase Turbo: Rookie Series unlocks Rookie, a brand new car that is perfect for players who don’t have much experience with racing games. It offers great handling and receives automatic upgrades as the player progresses in the campaign. The players can also choose among other 4 classic cars from the base game, unlocking new tracks by finishing each available race — it’s possible to freely return to each of them to train and improve their results. 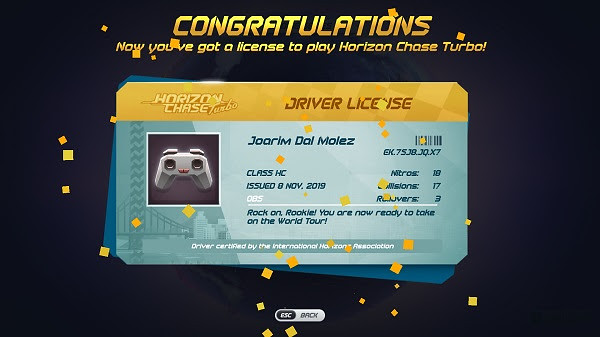 When the players reach the end of Rookie Series, they’ll unlock a special Golden Driver’s License, that ensures they’re ready for World Tour and other gaming modes. With the new Rookie Series campaign DLC and our complete local multiplayer mode, we hope to bring friends and families together to enjoy everything Horizon Chase Turbo has to offer. 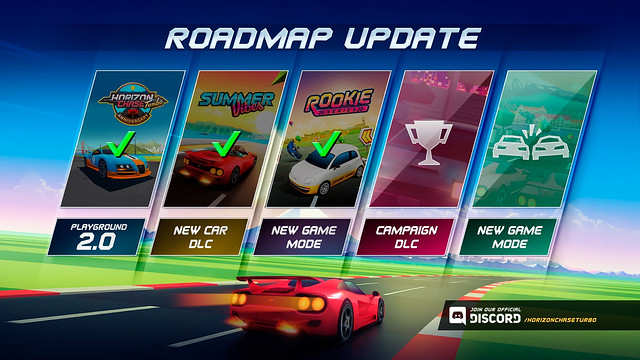 WORDS FROM THE PLAYERS

“My experience with Horizon Chase Turbo on the Nintendo Switch has been exhilarating; In my opinion, this is the best racing game on the Switch so far. From the classic arcade feel to the leaderboards, it’s a blast to play each time.”

“My entire family was OBSESSED with Horizon Chase Turbo! All three of my kids (then 10, 6, and 2), my wife and I, my sister-in-law, my mother-in-law. The Horizon Chase Turbo soundtrack and Taylor Swift are the most requested driving music.”

“Horizon Chase Turbo shows that you don’t need all the realism and perfectionism of recent games to create an amazing gameplay, it is fun and exciting rather than deep and complex, and that is what makes this game my personal goty 2018.”

“Old games aren’t really as fun today as we remember them. I love #HorizonChaseTurbo because it tricks me into believing I’m playing and old game, but without the hassle of poor controls and ancient design. I appreciate it. Happy Birthday!”

“We created Horizon Chase Turbo to be the racing game we wanted to play, hitting the sweet spot between true-to-life simulators and chaotic, explosive kart racers,” said Aquiris Studio Game Designer, Felipe Dal Molin. “With Horizon Chase Turbo, we want players to feel the nostalgic tension of the simple tug-of-war of a tight turn; where players are run off-road for a split second only to return to intense high-speed action as they overtake and battle against friends playing together on the couch or via the online ghost mode.”

Aside from the modernly retro graphics, the split-screen couch multiplayer modes are among Turbo’s most defining features. All game modes, including the World Tour campaign, tournament and endurance challenges support local split screen multiplayer up to four players. Racers can compete in head-to-head races one at a time, or spend hours racing around the globe collecting coins to achieve the common goal of unlocking exotic vehicles and spinetingling tracks.