Gal*Gun 2 immediately gives me the impression of a harem style anime, which is most usually targeted for members of the opposite gender. I decided to give Gal*Gun 2 a spin and start up a fresh game. We learn the premise in the first few minutes. A student sitting beside me strikes up a conversation as if we’ve been friends forever.  I’m a classmate to these girls, which leads me to believe the player character may be another girl. Let’s find out.

After class I realize I forgot my phone and return to find it sitting on my desk. I attempt to pick it up, but a random cardboard box shows up. I’m given the option to leave it alone, but why not open it? When has it ever been harmful to open a box that just magically appears? Inside I find a pair of goggles and a “hair dryer”. Once again, let’s go ahead and put these on, because nothing bad could possibly happen.

A program loads in the VR goggles, and I’m announced to be a lucky winner. This has bad news written all over it. Can I just take these goggles off now?!  That’s when an angel appears and declares my heroic duty of fighting off demons plaguing the girls of the school. I have the option to refuse, but as with most games, no matter what response I give the storyline continues in the same direction. Despite how much I was hoping to be just another female student, she addressed me as “sir”, so I’ve assumed the role of a male student. Perhaps the school isn’t as all female as I believed, or I’m just that lucky. Well, here goes nothing! 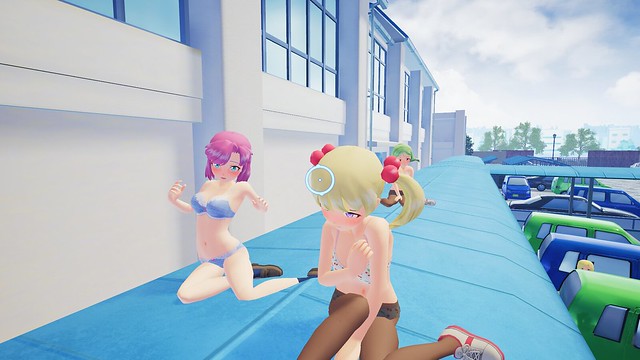 Time to use my Demon Sweeper to take care of some demons and utilize the Pheromone Shot to  give the girls euphoria. I’m pretty frightened at this point for what I’m getting myself in to. Out of nowhere, girls just rush up to me like I’m some rock star, so I start blasting them! Before I know it, they’re falling at my feet. Yes! I hope I’m slightly attractive. Did I brush my teeth this morning? If you ever wanted to live out the fantasy of being a paparazzi flocked by exotic girls, this game is definitely for you.

The game play is smooth, whether while playing on a television or on the handheld. For those of us not fluent in the Japanese language, the subtitles speed is adjustable but starts out at a slow pace. The cell shaded graphics make the game feel like I’m playing a fan service anime.

To answer the question about whether I can remove the VR goggles, my angel guide conveniently forgot to mention that I can’t take them off until I meet a specific quota by a certain date. Turns out I have really cool neighbor, who I can tell secretly likes me, and is probably jealous that I’m giving all these girls euphoria. I really like Chiru, she has a tough attitude and acts like my devilish good looks have no effect on her. Kurona was also a fun character to meet, fiery and sassy, definitely my type of girl. 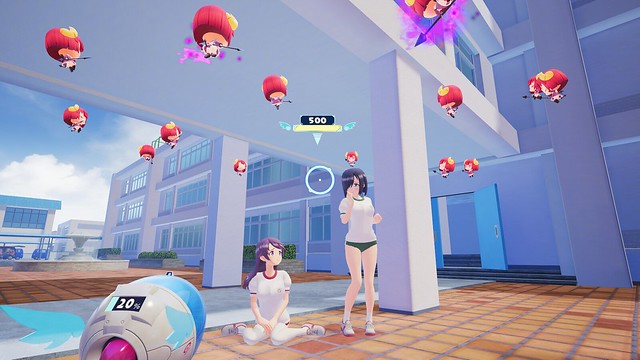 If I’m not careful, these girls are going to glomp me to death! No, I really did almost die. Not only do I take damage when they rush up and thrust a love note at me, the Japanese letters that appear when they shout to express their undying love cause damage if I don’t suck them up with the Demon Sweeper. The students possessed by the demons are surrounded by a purple hue, and you can shoot the demons or have the gun inhale them. Just a word of warning, be mindful of the charge on your gun. By the end of the mission, my vision was blurry and fading to red. Finding a girl’s weak point became pretty easy after playing a couple missions to overcome the brief learning curve. For the most part, the students stand there long enough to let you do a quick up and down scan, and then POP! One well-aimed shot and they’re experiencing euphoria, all thanks to me! That is called an Ecstasy Shot.

I did my best to catch the details of the girls at the school, but taking too much attention away from actually playing the game was what got me in trouble. Some of the students are dressed in white uniforms with skirts, while others wore more athletic outfits. DLC like Bubble Bath Bikini and Meowvelous Sweater adds variety to their appearance. The girls have an attractive bounce to their breasts, nothing too excessive. Their bodies shaking in anticipation for what I’m about to do to them is cute, but the animation, as well as their moans, becomes repetitive. The only way to move around during a mission is by shooting at a predetermined spot. There is no independent movement, which takes away from the game play.

Tags: Console, Handheld, PlayStation 4, Switch
Summary
Overall, the game hits the mark for its basic concepts. We have a mission of saving the school, nay, the world, from demons. We have interesting characters with varying personalities and we have substance. We have the girls who want to dominate you, and those that would prefer you dominate them. The graphics and game play are smooth, nothing extraordinary. Probably want to play this game with headphones plugged in if you plan on taking your Nintendo Switch on the go. 7 out of 10 for me. Great job, Gal*Gun 2.
Good
Bad
7.1
Good
Gameplay - 6.5
Graphics - 7
Audio - 6.8
Replayability - 8
Controls - 7

Rumor has it Super Mario Galaxy, Mario 64 Remasters are coming to Nintendo Switch this year
March 30, 2020

Gal*Gun is back for an adventure more outrageous than ever! A new army of girls has been overpowered by lust in THE FULL-FRONTAL SEQUEL to Japan's infamous shooter. Fend them off with your Pheromone Shot and use new gadgets to expel demons from their bodies in the most audacious first-person shooter you'll ever play!
8
Average User Rating
1 vote
Click on a star to submit your own rating!
Your Rating: 0
Submit
Genre:Action-adventure game, Arcade
Developed By:INTI CREATES CO.
Publisher:PQube
Platforms:Nintendo Switch, PlayStation 4

Theo May 18, 2020 0 likes
7 Good 8.2 GreatUser Avg
X
We use cookies to ensure that we give you the best experience on our website. If you continue to use this site we will assume that you are happy with it.OkPrivacy policy