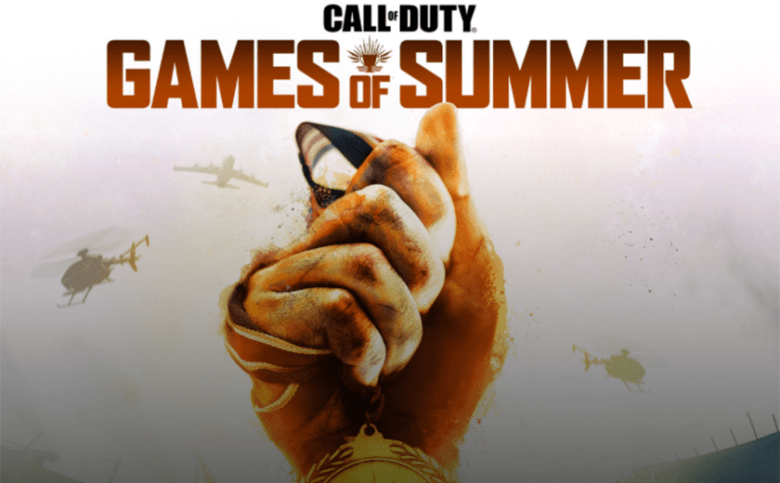 Following Shadow Company’s explosive arrival to Verdansk, Games of Summer will arrive to challenge all Operators on their skills. Only the most talented will be rewarded with the spoils of the games; the prospect of which has invited a new reinforcement to the Coalition’s Warcom division.

This is Season Five Reloaded arriving on August 24 at 11 PM PT with the official kick off of Games of Summer on August 28. 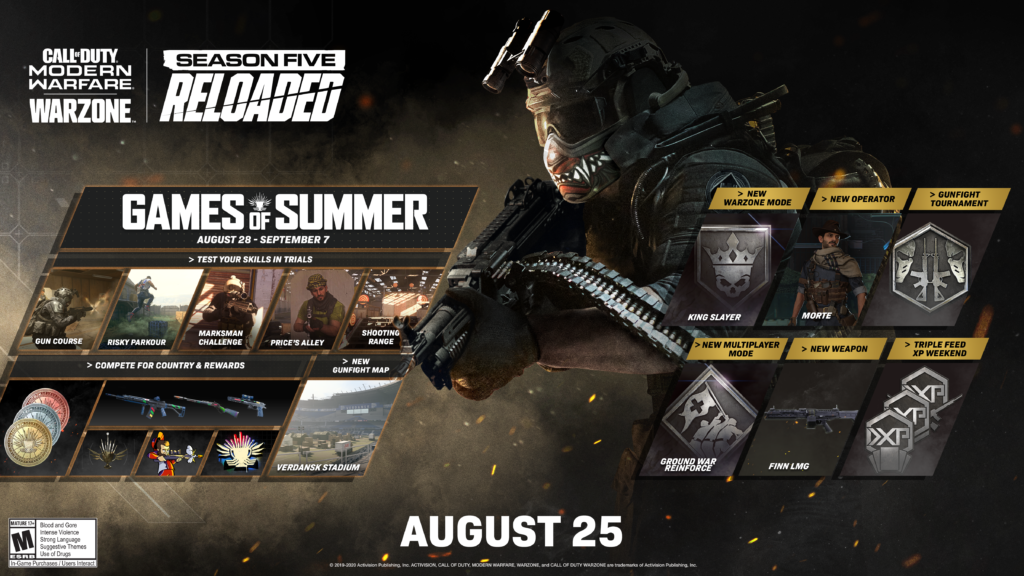 Here’s what’s inside the latest major update to Season Five: 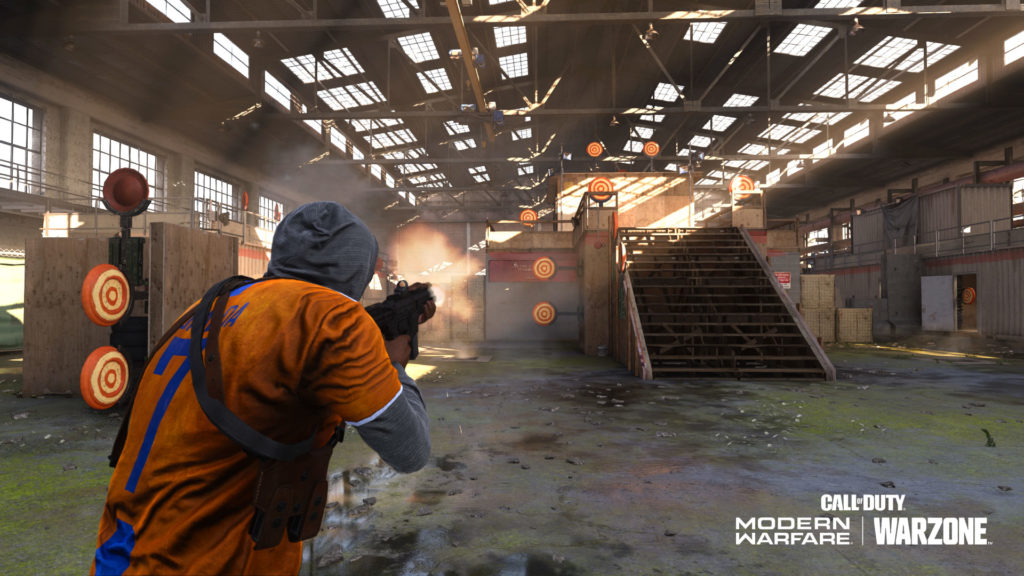 Compete for Glory… And Free Rewards

For the first time in Call of Duty franchise history, community members from around the world – both those who own Modern Warfare and free-to-play Warzone – will be able to represent their country in easy-to-play, hard-to-master, single-player Trials of skill. By earning medals in each Trial, competitors will prove which country’s Tier One Operators are truly the best in the world.

Within Games of Summer, there are five Trials. These miniature experiences are similar to those introduced at Modern Warfare’s launch and in post-launch Season updates.

Trials will be available for Modern Warfare and free-to-play Warzone players, starting on August 28 at 10 a.m. PT. Players will have unlimited entries, meaning you can keep playing them to set your best time or score and go for Gold. 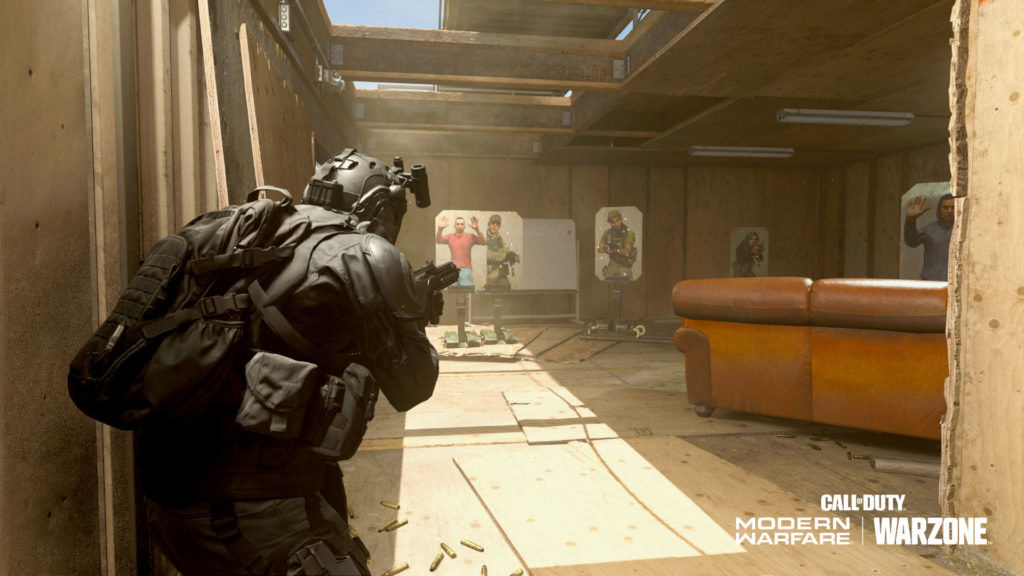 A Pentathlon of Trials

Gold Medal tip: some Trials shave seconds off your final time for high accuracy, while others add points based on how quickly waves are completed. 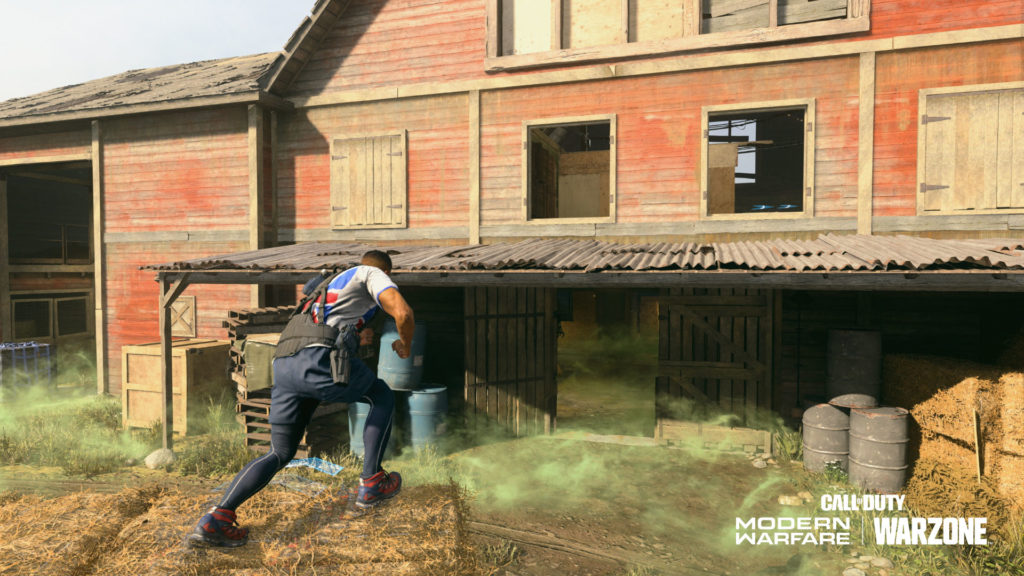 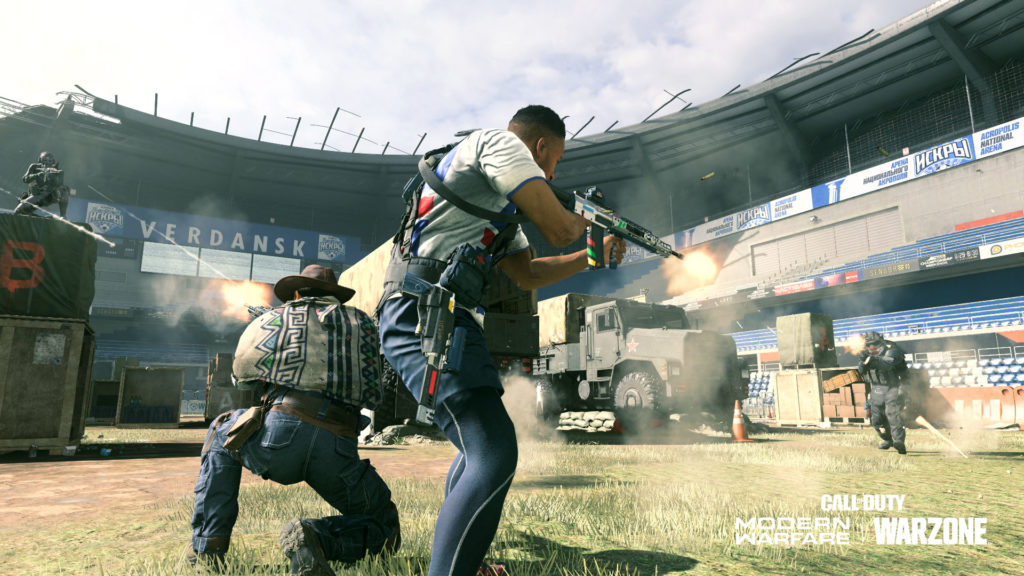 To the Victor Goes the Spoils for Self and Country

For participating in Games of Summer, players will receive rewards based on performance within each Trial. These rewards are stackable – if a competitor achieves gold on the first try, they will receive all three rewards for their epic (or in some cases, legendary) achievement.

Each Trial medal comes alongside rewards (rewards can only be received once) and all players who participate earn the ‘Games of Summer Cup’ weapon charm. Trials rewards include but are not limited to vehicle skins, XP tokens, vehicle horns, calling cards, and Legendary weapon blueprints.

Earn gold in each Trial and receive the Legendary Assault Rifle Juliet Blueprint, a weapon truly built for chasing first place on any leaderboard. Built for pure precision with a clear, non-magnified sight picture, consider this a “gold standard” among a competitive pool of this weapon platform’s existing blueprints.

On top of these rewards, individual medals will give points to a player’s respective country, determined by their account’s origin. Each country’s points will be updated daily, and the top 15 countries will be visible on in-game leaderboards. Total scoring is weighted by country participants, so any nation can rise to the top.

Earn medals and rack up your points for your country, then at the culmination of Games of Summer, a country will be crowned champion. Will there be an underdog that claims glory for a well-contested Trial at the 11th hour? Or will one country hold a commanding lead throughout the Games? 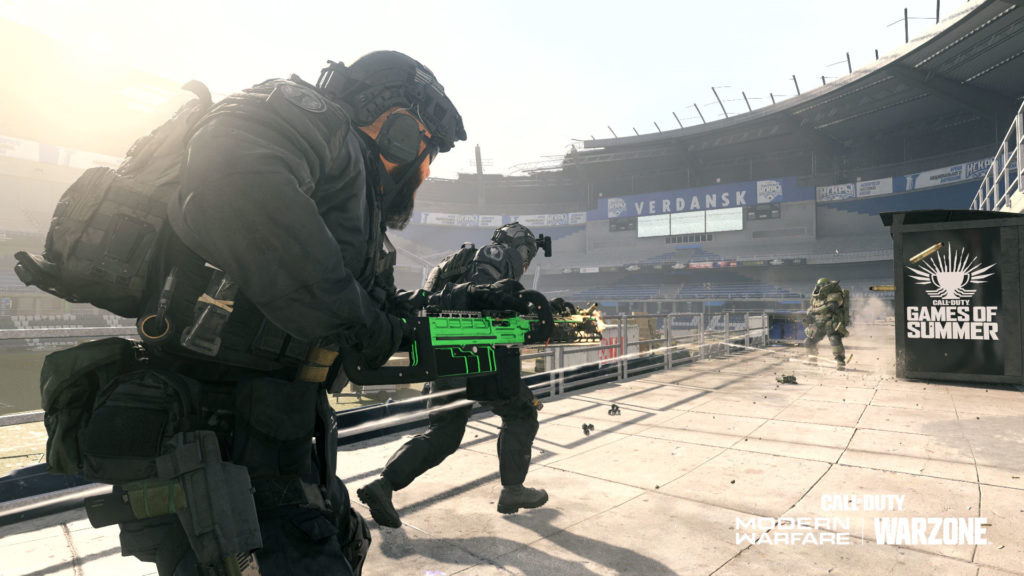 The heaviest primary weapon class in the game has a new challenger, the FiNN LMG and it will punch well above its weight against many of the existing LMGs.

This new LMG can be earned by completing an in-game challenge or a blueprint variant can be acquired by purchasing the “Mainframe” bundle.

An agile, mobile, and hostile tank of an LMG, the FiNN’s ultra-light and open-bolt design is uniquely paired with advanced recoil controls. This all adds up to a weapon with exceptional full-auto accuracy while still being lightweight, allowing for a unique playstyle that further blurs the line between assault rifle and LMG. 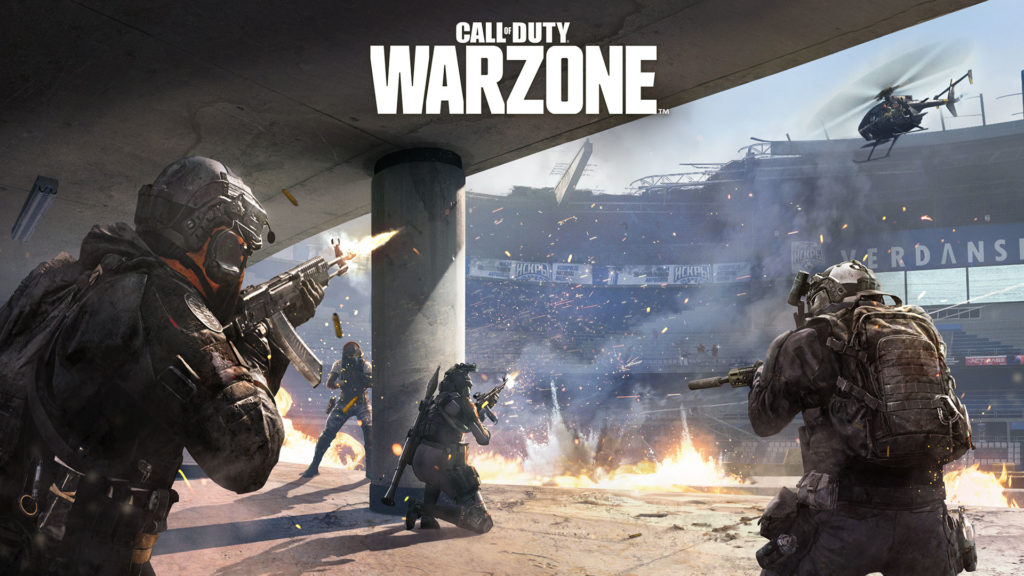 King Slayer is large-scale Team Deathmatch on Battle Royale where teams fight to earn points by defeating hostile players. However, the circle doesn’t collapse, rather it moves around the map for an agile battle on the go. The top five team’s top scoring player will be marked as a ‘king’ on the Tac-Map. Eliminate kings to get additional points and be awarded a free Killstreak. 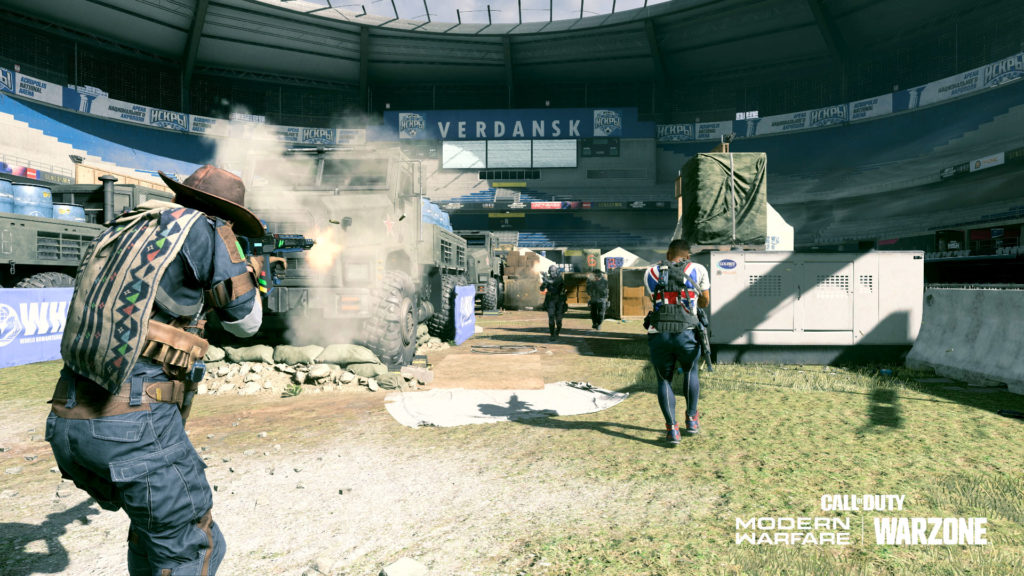 What’s Games of Summer without a tournament? Gunfight Tournament returns as a head-to-head test of gunskill, map knowledge, and coordination, and a proper tournament deserves a Stadium.

The pitch level of the larger Stadium has become available for Gunfight. It’s a much smaller play space in the Gunfight mode, so remember to use those tents, crates, and other obstacles for cover, especially if an Overtime flag is on the line.

Gunfight tournament winners will be rewarded with XP, high tier cosmetic rewards, and bragging rights as victors of the summer tournament.

All players can join in the tournament during the Free Access Weekend from August 28 to September 2 featuring the Gunfight Tournament playlist.

If you have a friend that hasn’t tried the full version of Modern Warfare or are a Warzone player looking to hone your skills and unlock prestigious Gunfight Tournament rewards, then enter the tournament and go for gold. 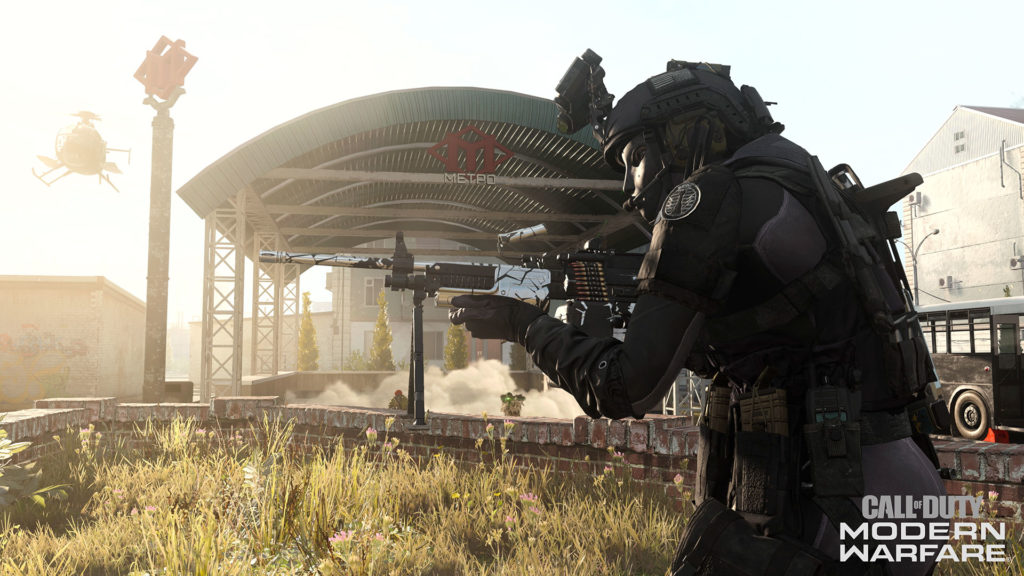 Owners of the full version of Modern Warfare, can experience a new way to play Ground War.

In this Ground War mode variant, three flags are positioned towards the center of the map, in a similar manner to Domination mode.

If you or a teammate are downed, you enter Spectator mode instead of respawning, rejoining the battle only after a new flag is secured by your teammates. Claim all three flags and you automatically win the round. Win enough rounds, and your massive platoon will all earn the victory. 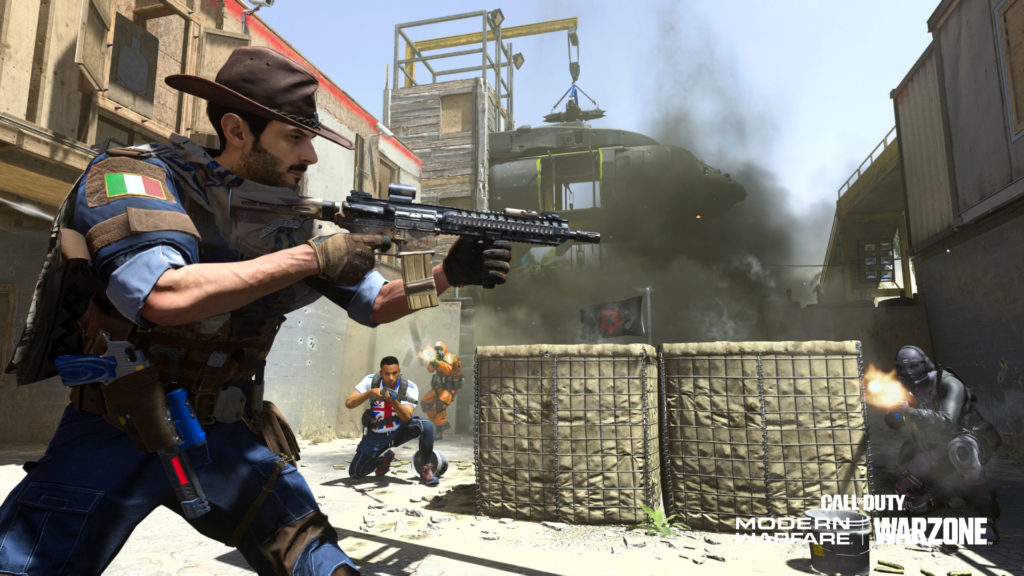 A Reloaded Store of Content (Available During Season Five Reloaded)

A spaghetti western-loving gunslinger will come to town, ready to lay down the law for the Coalition.

His name is Morte, and he’s Warcom’s newest recruit found in his own Store Bundle arriving later this Season.

Sergio “Morte” Sulla hails from Italy, is a skilled tracker who loves the Old West and strongly adheres to his own rules regarding right and wrong. Served with the legendary Col Moschin paratrooper regiment in Italy before being selected to join Warcom.

Other bundles available in Store during Season Five include the “Mainframe”, featuring a Legendary blueprint of the all-new Light Machine Gun Golf as well as the “Game Winner”, a sporty bundle featuring Coalition SAS Operator Kyle “Gaz” Garrick in a Legendary skin which suits him for some games on the Stadium pitch.

If you want to learn more about this update, read the latest Patch Notes on Infinity Ward’s official developer blog. 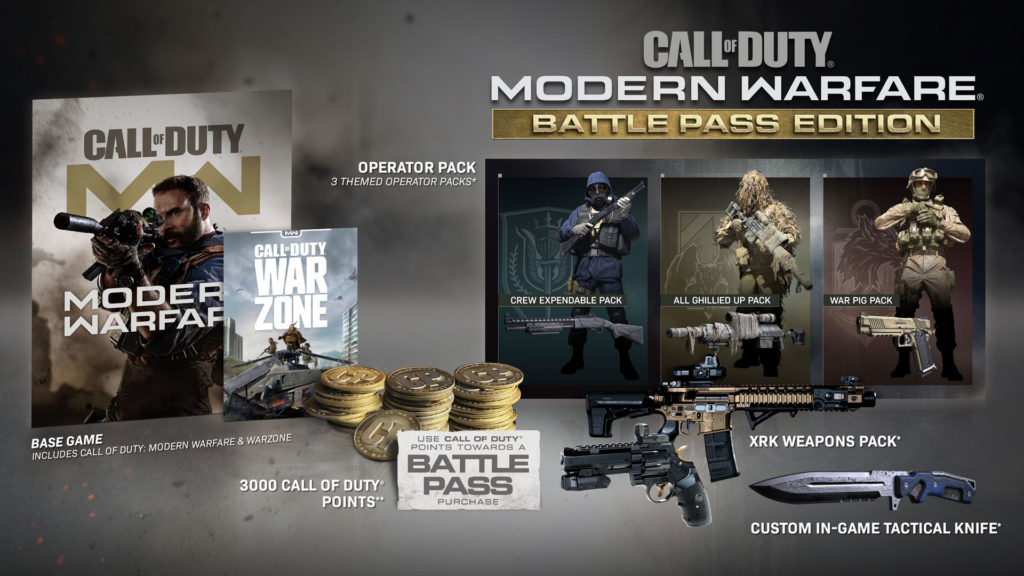 Upgrade to the Full Experience

Are you still waiting to drop into the full version of Modern Warfare? Then get the Modern Warfare Battle Pass Edition, and experience everything from a thrilling Campaign, a suite of Multiplayer maps, to a variety of fraught Special Operations designed to test your mettle and continue the narrative through challenging team-based experiences.

The digital Battle Pass edition of the comes with the following:

Visit CallofDuty.com, select the Modern Warfare Battle Pass Edition, your preferred platform, and region to get the game. Download to start playing.

Get locked and loaded, and ready yourself for a cavalcade of new content available as part of Modern Warfare Season Five.