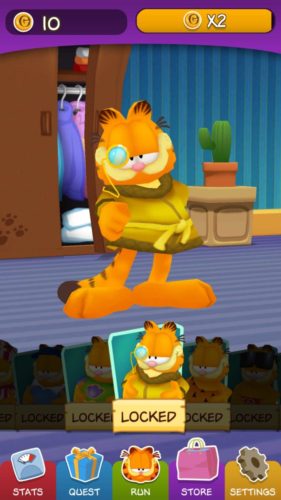 If the Fat Lazy Cat can do it, so can you!

Couch potatoes of the world, rejoice! Animoca Brands (ASX:AB1) announces the global launch of Garfield Fit, the health mobile app that gets you moving with Garfield the cat as your exercise partner. Now available free for iPhone® on Apple’s App Store℠ with support for Apple Watch®, and for Android devices on Google Play™.

Lack of physical activity is one of the 10 leading risk factors for death, and a key risk factor for various diseases like diabetes and cancer. The World Health Organization warns that sedentary lifestyles carry serious health risks, and that many people do not get enough exercise despite its well-established benefits (source: W.H.O. factsheet). Garfield to the rescue! The lasagna-devouring feline is leaping into action to improve his and your physical activity levels. If Garfield can move more, so can you!

Garfield Fit turns real-world exercise into a game in order to increase motivation and adherence to physical activity. The app is a sophisticated pedometer with tailored fitness solutions for children and adults, motivating you to move more and adopt a healthier lifestyle as you interact with Garfield, Jon, Odie, and the other characters from the Garfield series created by legendary cartoonist Jim Davis.

Simply launch Garfield Fit on your phone or Apple Watch and then begin walking or running; Garfield will respond to your activity level and track various information including steps taken, pace, calories used, and time spent exercising. You can set rewards for daily goals for yourself or your children, and work to achieve them together with Garfield and friends.

The app offers personalized coaching based on algorithms that adaptively adjust training schedules so that you continue to challenge yourself and make progress. Exercise targets are based on fitness level and difficulty (easy, medium, hard) with different daily goals that increase safely over time. Progress reports are issued periodically so you can stay on track as you work toward a healthier lifestyle.

Garfield Fit tracks your physical activity and converts it into Coins, which you can use to customize your experience and unlock outfits for Garfield. The more you walk or run, the more coins you will earn.

Garfield Fit is produced by Animoca Brands and published by its studio Web Prancer. Animoca Brands has been developing and publishing mobile games based on the famous Garfield comic strip since 2011 under its partnership with Paws, Inc. These games have been downloaded over 65 million times in several languages.

Jim Davis, the creator of Garfield, said: “People don’t often associate Garfield with fitness, but in truth his motto has always been “Eat. Sleep. PLAY.” And Garfield should be a great motivator. After all, if Garfield can get fit, anyone can!”

Robby Yung, CEO of Animoca Brands, commented: “A sedentary lifestyle is extremely detrimental to health. The World Health Organization recommends 60 minutes of daily exercise for children and 150 minutes weekly for adults, but too many people fall short. In Garfield Fit we leverage the famously lazy cartoon cat to make healthy exercise goals attainable and fun.”