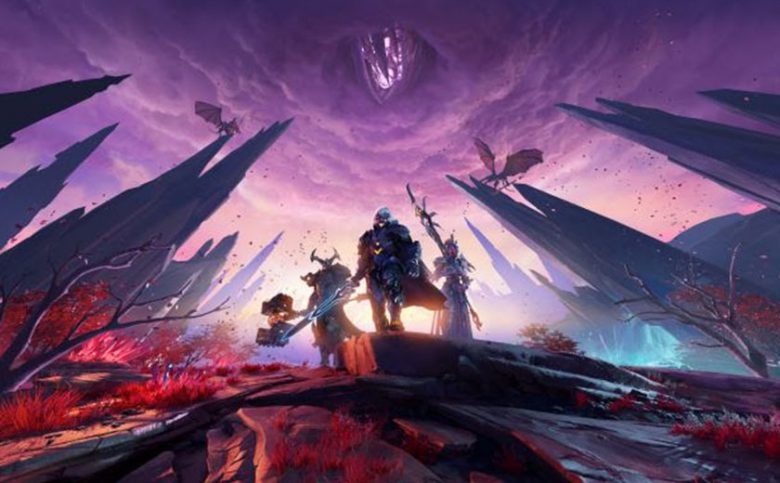 Incredible new Godfall content rolled out today with a new expansion and free update, Gearbox Publishing announced this morning. Gearbox also hailed that the game is now available on the PlayStation 4. The PlayStation 4 and PlayStation 5 communities can now party up with their friends via PlayStation Network to tackle Godfall’s new expansion – Fire & Darkness. Additionally, all versions of the game receive the free Lightbringer Update, which includes: a brand-new game mode, endgame matchmaking beta, unique cosmetics, and powerful new loot items, as well as additional quality of life enhancements.

“We are overjoyed with the response from the PlayStation community to Godfall and are thrilled to welcome even more players to the world of Aperion through PlayStation 4,” commented Keith Lee, CEO of Counterplay Games. “Godfall is an immensely exciting and ambitious project for us, and we are always listening and learning from player feedback – especially for this next chapter. With Fire & Darkness and Lightbringer’s additions and enhancements, now is the perfect time for both new and returning players to dive into Godfall.”

Godfall is set in Aperion, a land on the precipice of ruin. You are the last of the Valorian knights, a god-like sect of warriors able to equip Valorplates, legendary armor sets that transform wielders into unstoppable masters of melee combat. Utilize breathtaking weapons to climb through the elemental realms of Aperion as you tear through foes and challenge the mad god, Macros, who awaits you at the top of the Skybreaker Monolith.

The Fire & Darkness expansion unlocks the Fire realm, brimming with new threats to extinguish and powerful loot to claim. All-consuming darkness threatens to spread throughout Aperion and rid the world of all light. Players who purchased Deluxe or Ascended editions previously for any platform gain immediate access. The base game is required to play Fire & Darkness expansion.

The Seventh Sanctum’s light has been trapped and the most powerful of knights will be needed to release and spread it. Building up enough strength to face the all-consuming darkness, players will find up to three Tears they will need to close while contending with dark forces. After completing each Tear, they will be offered the opportunity to accept a curse. The more curses selected, the greater the power of your enemies, but if successful, the greater the reward after facing the final challenge. The end phase of the mode will have players fighting unprecedented combinations of enemies.

“Counterplay Games has listened to players and doubled down on what is loved most about Godfall and delivered a wonderous expansion to the world of Aperion with Fire & Darkness,” said Gearbox Publishing President Steve Gibson. “We’re excited to share all the hard work they have put into the title and grateful to the supportive PlayStation community as Counterplay pushes the looter-slasher further.”