Get ready to kick butt and chew bubble gum! GungHo Online Entertainment has announced that its upcoming arena brawler Ninjala will be having a second global open beta this month. 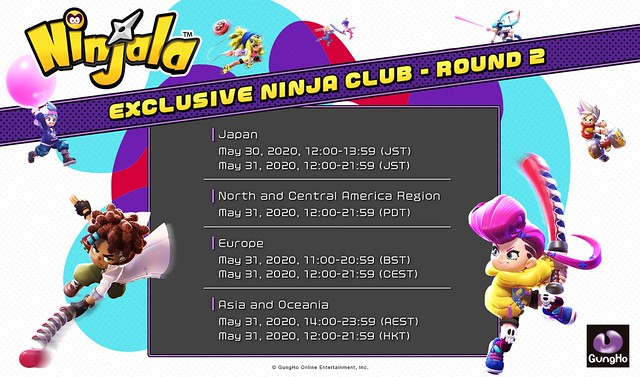 Players who missed the first open beta will have another chance to try out the eight-player arena battle mode and a training mode on May 31, with specific times for each region listed below. Access to the game will only be available during the time slot for your region. During the open beta, players will be able to wield four of the 12 weapons that will be available at launch: the Ippon Katana, Drill Beat, SK8 Hammer, and Trick Ball. You can download the Ninjala beta from the Nintendo eShop at a later date with an internet connection and a Nintendo Account. A Nintendo Switch Online subscription is not required to play Ninjala.

For further details on Ninjala, check out our fourth dev diary (released today), which provides an overview of the monetization structure in Ninjala. The in-game currency, called Jala, can be purchased from the Nintendo eShop and then spent in the in-game shop for costumes, emotes, stickers, and other cosmetic enhancements.