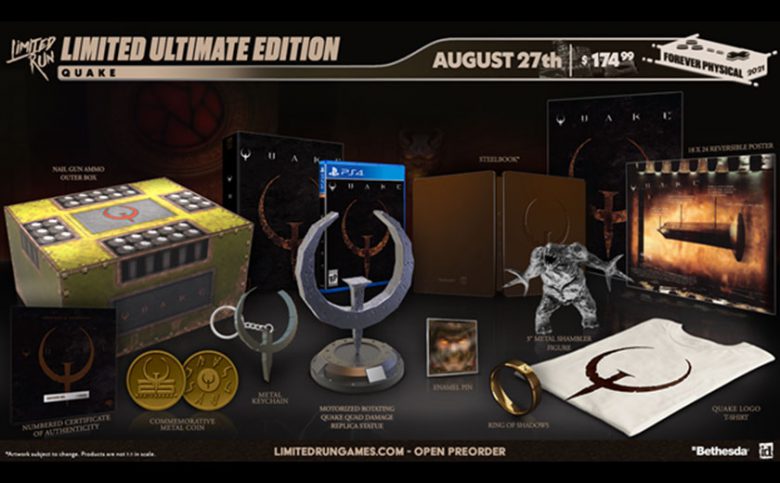 Genre-defining FPS Classic to Get the Bespoke Collector’s Editions Every PlayStation 4 and Nintendo Switch Fan Deserves.

Limited Run Games, pioneers dedicated to the preservation of classic, current, and influential games in the physical format, announced today their three physical collector editions for Quake for PlayStation 4 and Nintendo Switch platforms. In partnership with Bethesda, the companies have joined forces to commemorate the iconic FPS that celebrates its 25th anniversary this year. Just in time to help kick off QuakeCon 2021, fans and collectors can pre-order the Quake Standard Edition for $29.99, Quake Deluxe Edition for $79.99, and the Quake Ultimate Edition for $174.99. Pre-orders begin on August 27th at 10:00 a.m. EDT and end on September 26th, 2021.

What’s in the physical box: Each edition includes a physical disc for the game and comes packed in a custom-made box inspired by the original 1996 box art design, featuring the classic Quake logo that is now synonymous with that halcyon era of first-person shooters in the ’90s.

“We believe your favorite games belong in a place of physical prominence on your gaming shelf,” said Douglas Bogart, COO, and Co-founder at Limited Run Games. “It’s been a pleasure working with Bethesda to create these special Quake editions packages that our Limited Run Games community will be able to receive and enjoy.”