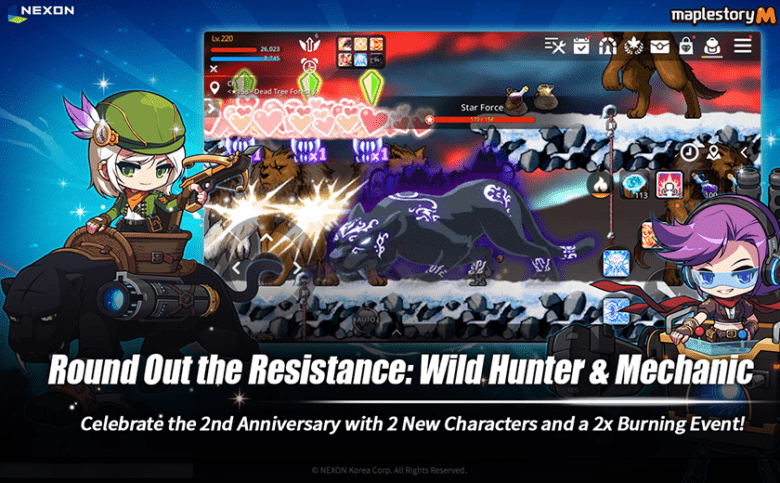 MapleStory M, Nexon’s free-to-play, mobile MMORPG sensation for iOS and Android, is celebrating its two year anniversary with the arrival of two new characters, Mechanic and Wild Hunter, joining the Resistance class to turn the tide against the forces of darkness.

Equipped with both a gun and a magnum, Mechanic has fast-paced combat advantages with two different modes: Humanoid Mech, which serves to fight multiple monsters at once, and Tank Mech for one-on-one combat. Wild Hunters are equipped with a crossbow and an arrowhead and ride a Jaguar into battle. Jaguars provide Wild Hunter with a huge boost in mobility and come in a variety of colors.

Another new addition, Sharenian’s Culvert, highlights guild and team play, where collaboration is more important than individual skills. Based on one five member party, Sharenian’s Culvert allows the party to match with two different guild parties for a total of 15 people engaging in smaller scale PvP action.

The update also introduces a selection of limited-time events, including: 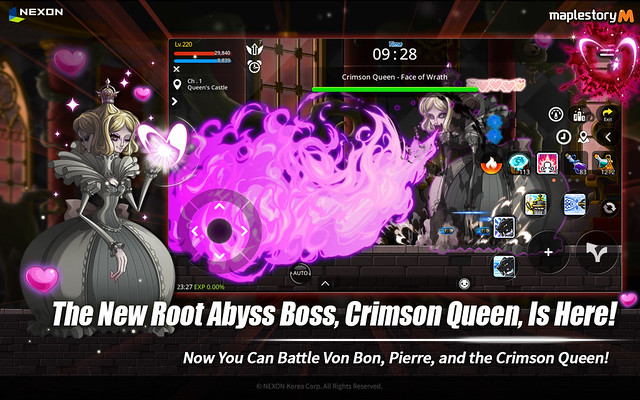 Throughout the month of August, partake in additional Hotel M Events, including the Hotel M Punch-King Event, Hotel M Cake Monster Event and the Hotel M Wonder Wheel Event. Maplers will be rewarded with an assortment of prizes, including Second Anniversary Coins, Auto-Battle Charge Tickets and additional rewards.

Crimson Queen is also added as the third Dungeon boss in the Root Abyss, unleashing different attacks based on her four changing faces. Players who complete the Root Abyss Expedition will receive special rewards such as currency that allows exchanging equipment in the in-game store and items to help with equipment reinforcement.

0 0
Previous ArticleFIGHT TO THE DEATH AND DEFEND YOUR NAME IN WARRIORS: RISE TO GLORYNext ArticleTake to the Skies in ‘Shakes on a Plane’