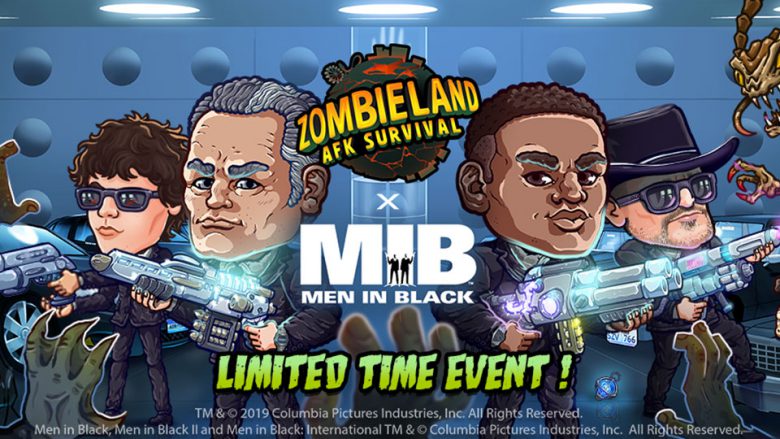 This Halloween season, Zombieland: AFK Survival is being invaded by aliens, agents, and gear from the blockbuster Men in Black films during a month-long event.

The hordes of zombies in Zombieland: AFK Survival have been replaced by the scum of the universe, and the best way to defeat them is to join forces with the experts in the field of fighting aliens – the Men In Black. Players can collect eight new MiB-inspired heroes, including Agent J, Agent K, over 30 new weapons, trinkets, and iconic Men in Black gadgets, including the memory-erasing Neuralyzer the Noisy Cricket and Agent K’s car.

During the next month, players can engage in daily tasks and missions to collect Universe Tokens and Red Buttons in the special Alien Invasion and Galactic Travels program to get more awesome items like the Deatomizer, the Reverberating Carbonizer, and much, much more.

The event also coincides with the second anniversary of Zombieland: AFK Survival, in which players embark on a wacky road trip across the post-apocalyptic wastelands of America that have been overrun by the undead. Whether playing as favorites Tallahassee, Columbus, Wichita, and Little Rock, or over 100 new characters, players must slay zombies in dozens of missions in a cross-country road trip from the woods of New England to the beaches of California. Players can also form guilds to compete in co-op raids for rare characters and weapons, and participate in weekly gauntlet challenges.