For forty years, Leonard Maltin’s Movie Guide served as the film geek’s Holy Bible, an annually updated softcover brick of a reference book, packed with thoughtful, witty, and occasionally weird capsule reviews of thousands of films. Those synopses are at the heart of King of Movies: The Leonard Maltin Game, a tabletop casual party game of creative invention and hilarious deception. 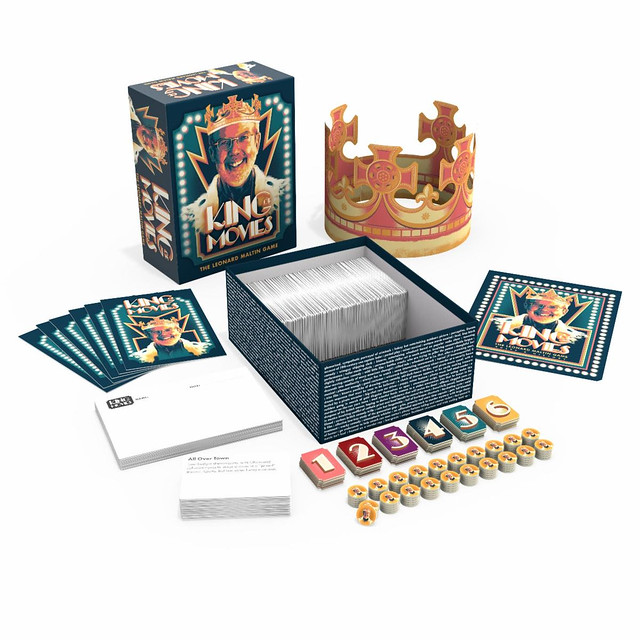 In King of Movies, it doesn’t matter if you’ve seen every film ever made or if you’ve never seen a movie in your life. The fun is in the fibbing. One player reads a movie title and the other players invent a short synopsis in Leonard Maltin’s unique style, with the goal being to trick the other players into thinking theirs is the real Maltin review. If you choose the real Maltin or you fool another player, you score.

Featuring handsome packaging with art by Mondo all-star Matt Taylor, the game contains everything you need to play the game with up to six players.

Stuck at home, apart from your movie-loving friends? Not a problem. One person can own the physical game and everyone else can easily play along via Zoom with the King of Movies app for iOS and Android.

If your synopsis is extra creative, your insane/brilliant/outrageous movie idea might just become a future cinematic sensation. Snap a photo of your best and most creative King of Movies synopses and post them to Twitter and Instagram with #MaltinKingofMovies. On January 1st of each year, Leonard Maltin himself (!!!) will choose one synopsis that will be officially optioned by Drafthouse Films.

King of Movies: The Leonard Maltin Game is available for pre-order now at MondoShop.com.

Faeria Out Now on Xbox One and Nintendo Switch
August 13, 2020

Answer The Call Of The Mountain In Legends Of Runeterra’s Next Expansion
August 10, 2020

The Second Season of Journey Begins in GWENT!
August 4, 2020

Is there anything more insane than the PVP mode of Doors of Insanity?
July 29, 2020