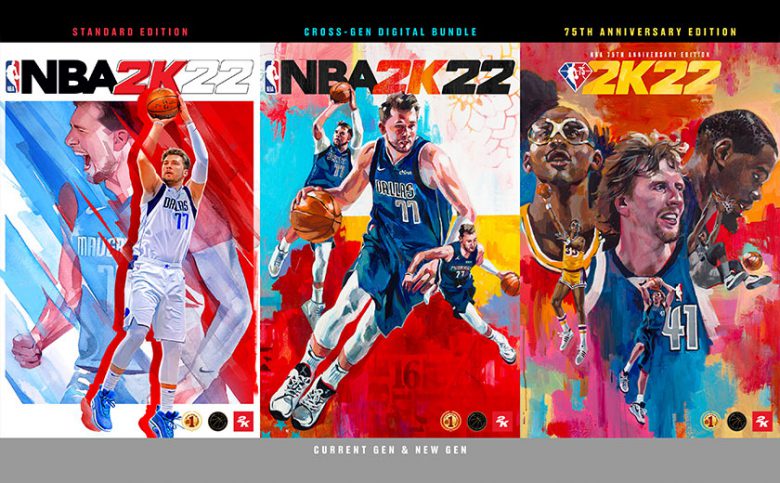 Today, NBA 2K announced their full lineup of athletes who will grace the cover of NBA 2K22, the next installment of the premier NBA video game basketball simulation series.

The NBA 2K22 NBA 75th Anniversary Edition and Cross-Gen Bundle covers were created by renowned artist, Charly Palmer – most known for his work “America Must Change,” which made waves as TIME Magazine’s cover in July 2020 – to celebrate the globalization of basketball and the evolution of the game throughout the storied history of the NBA. Three of the most iconic Big Men that changed the sport, Kareem Abdul-Jabbar, Dirk Nowitzki, and Kevin Durant, feature in a custom pastel artwork cover for the premium NBA 2K22 NBA 75th Anniversary Edition. 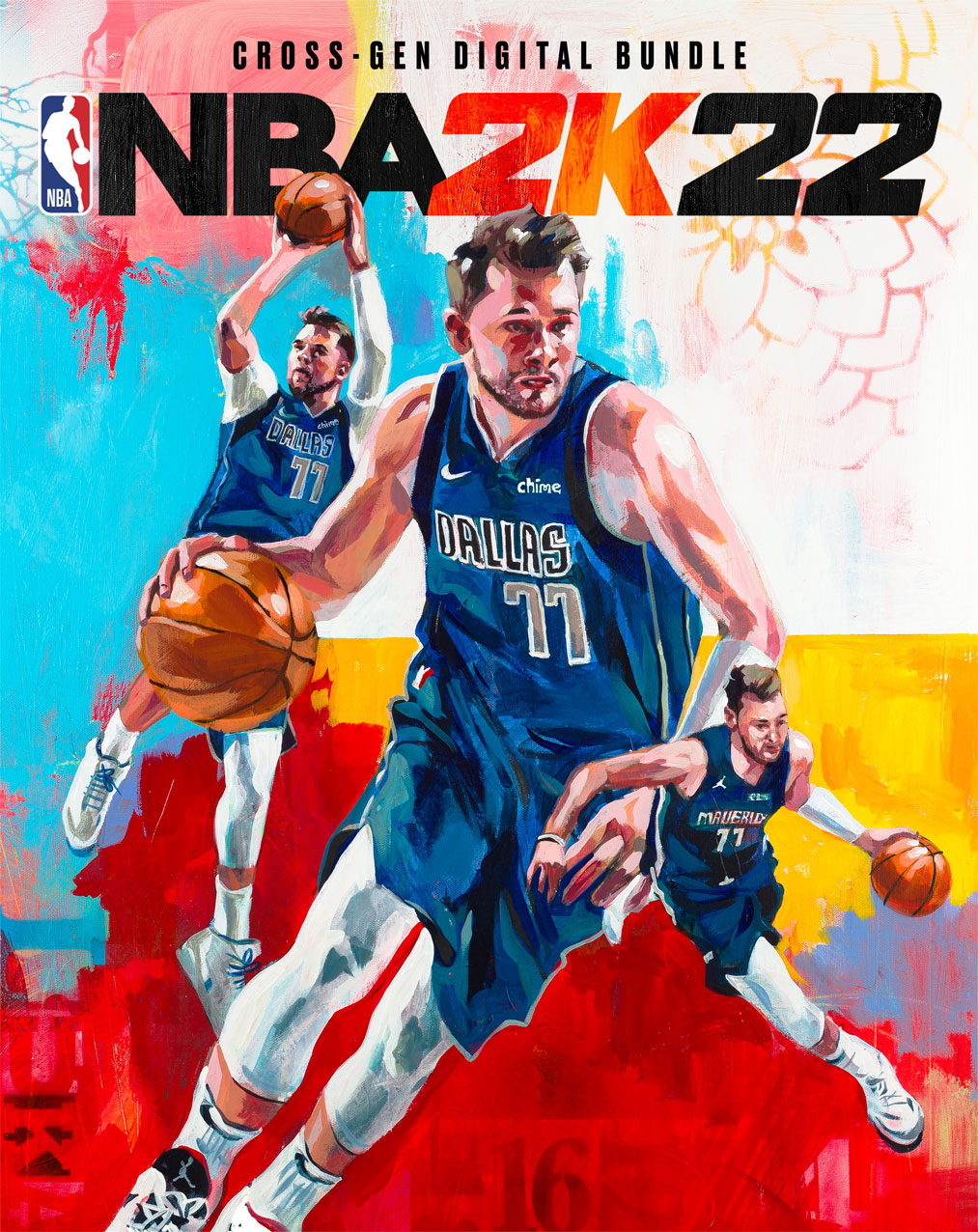 Honoring the international and cultural impact the NBA has had on the world, NBA 2K22 features Slovenian native and Dallas Mavericks point guard, Luka Doncic, as the franchise’s feature athlete appearing on the cover of the Standard Edition and Cross-Gen Digital Bundle.

All editions of NBA 2K22 are currently scheduled for worldwide release on September 10th, 2021, and are available for pre-order today. Featuring best-in-class visual presentation and player AI, historic teams, and a wide variety of hoops experiences, NBA 2K22 puts the entire basketball universe in the player’s hands.

“Making the global cover of NBA 2K22 is special for me,” said Dončić. “I’m proud to represent my country in a special cover that honors the colors of the Slovenian flag. Basketball has given me so much, and I’m excited to give back and work together with 2K Foundations this year to help the lives of young kids around the globe.” 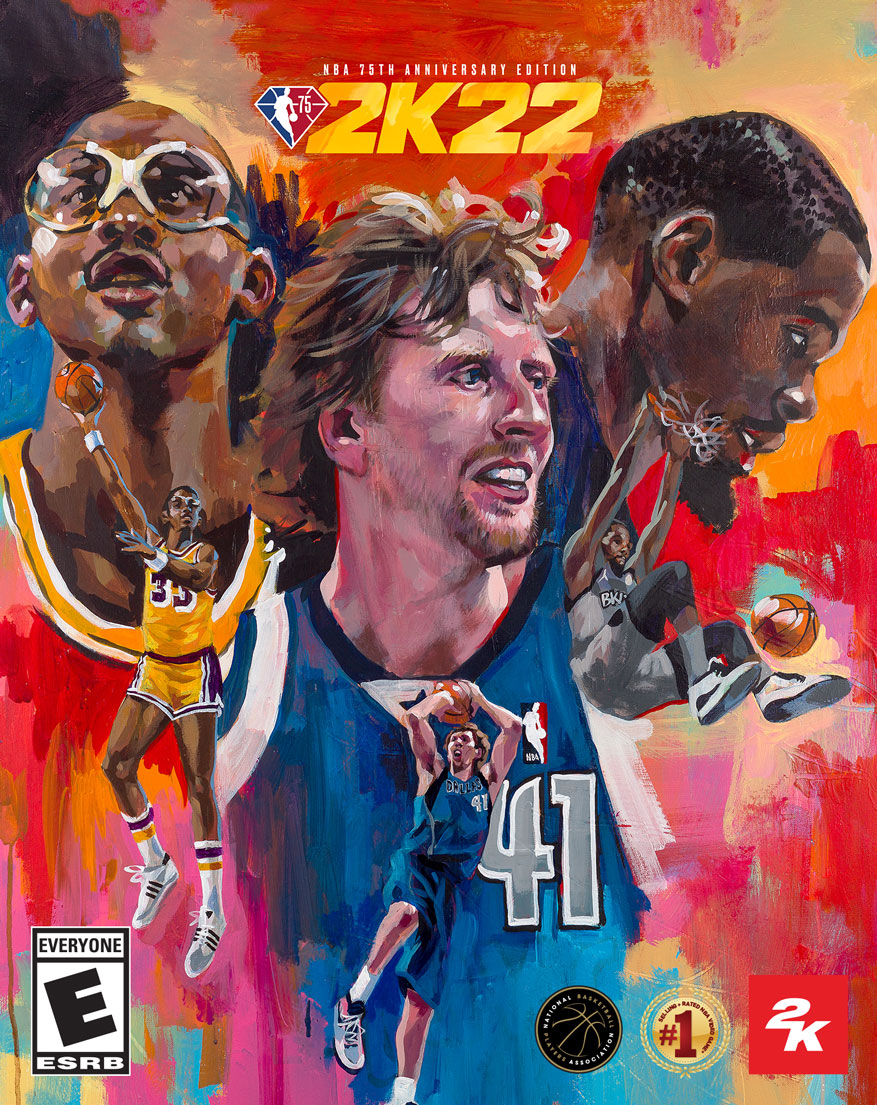 This year, NBA 2K22 will offer three editions of the game available on digital and physical formats: Standard Edition, a Cross-Gen Digital Bundle, and a special NBA 75th Anniversary Edition: 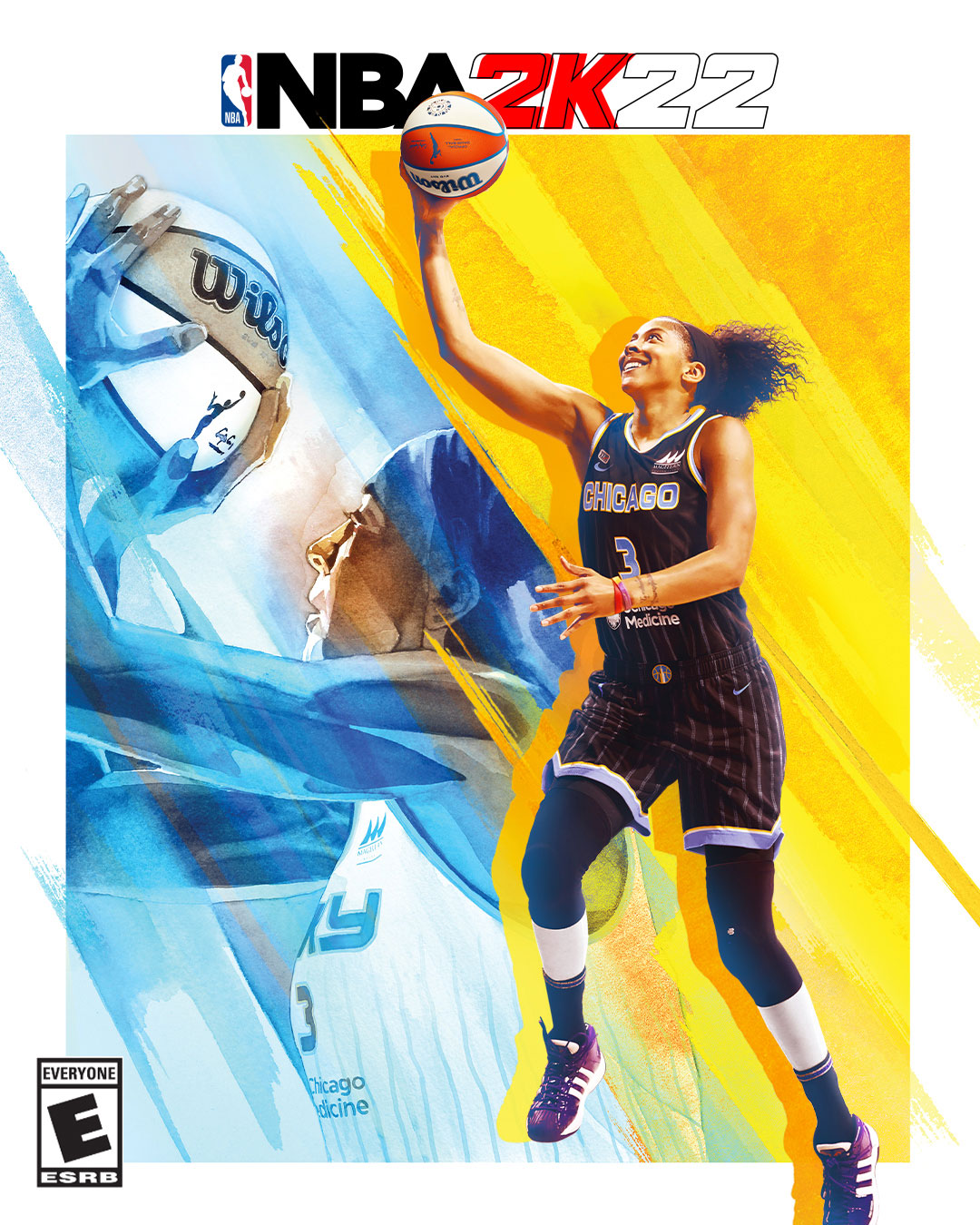 The NBA 75th Anniversary Edition celebrates three of the league’s most iconic big men who revolutionized the league over its 75 years:

The NBA 75th Anniversary Edition and Cross-Gen Digital Bundle feature cover artwork painted by Atlanta-based artist, Charly Palmer, whose work in fine art is defined by complex compositions and a unique technique and style. Palmer’s work is exhibited across the nation; he is most recently known for his “Civil Rights” series of paintings and compositions titled “America Must Change,” which made waves as TIME Magazine’s cover in July 2020.

“The NBA 2K cover has always been a vehicle for storytelling and a way to showcase the unique and diverse backgrounds of the athletes,” said Alfie Brody, Vice President of Global Marketing Strategy at NBA 2K. “The culture around the game of basketball is vibrant and transcends geographical boundaries. This year, we want to showcase that global diversity via Charly’s amazing, one-of-a-kind art.”

In North America, players can purchase a special version of the Standard Edition featuring six-time WNBA All Star and WNBA Champion, Candace Parker, on the cover and available exclusively through GameStop and EB Games. Parker’s appearance is a milestone for NBA 2K: the first female cover athlete in the history of the franchise. The Chicago Sky star’s cover feature is the latest step in NBA 2K’s ongoing initiatives to feature women prominently in the game. In Japan, players can also purchase a special version of the Standard Edition that features Washington Wizards Rui Hachimura, a rising star who was the first Japanese player to be drafted in the first round in 2019 and first Japanese player to reach the NBA Playoffs.