LA-based Zone Esports, formerly known as Most Wanted, was recently acquired by Esports veterans Brent Page, Reese Stiller, Kevin Jackson, and William Damin. A familiar name to those in the competitive Call of Duty scene, Most Wanted was a force to be reckoned with in the Call of Duty World League. During their time competing, the organization created a name for itself through its successes – and with that name came a following. Now renamed Zone Esports, the organization boasts a following of nearly 275,000 strong across Twitter and Instagram. Numbers like this are unheard of for most newer organizations, especially in orgs with only one main team. So, what makes this west-coast gaming organization stand out from the masses? How do the new owners intend to use their following to change the industry?

Esports is an expansive and evergrowing industry. Every day, new players, streamers, and organizations launch themselves into the foray hoping to make a name for themselves. Because of the competitive nature of making it in this industry, sometimes these hopefuls can lose sight of what’s important or never make it off the ground. Brent, Reese, Kevin, and William have seen it happen all too many times. Upon acquiring ownership of Zone just a short time ago, these men decided they wanted to make their Esports organization different.

“Zone Esports is a place you can call home – where we’re committed to you as a player,” says Director Brent Page. He elaborates, “The players are the organization, so if the players aren’t happy, they can tear an org down.” Their mission is to make Zone a transparent and accessible organization, where new players can come to get their start and grow in the industry without getting taken advantage of. Most young, new players have never signed contracts or made business decisions; Page points out that organizations take advantage of that as it’s one of the main faults of the industry. “I want to give someone a chance,” Page explains. “I want to give someone an opportunity because I feel I have the power to change someone’s trajectory in life.” 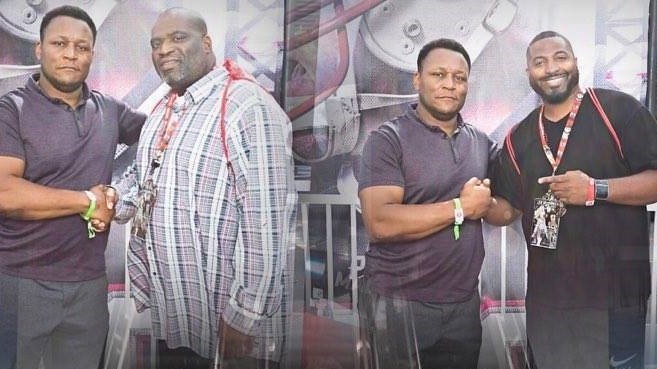 Director Brent Page on the right, Director Kevin Jackson on the left, with NFL Hall of Fame Running Back Barry Sanders.

Even for those who aren’t ready for the competitive scene, Zone’s directors want to help them grow. “I went through 165 player applications, and I responded to each and every one,” says Director Reese Stiller. In fact, Reese and the other directors will give feedback to applicants to help them improve. Page adds, “We’re not in Esports to make money. It’s not about a quick buck – it’s about giving someone a chance.”

Page recalls a situation where Zone signed several players that were living in the Jordan Downs Projects of Watts, California. The Jordan Downs Projects are known for being overrun with gang violence and drugs. By signing these players to Zone, Page helped remove them from that volatile environment and possibly prevented them from being a part of the gangs of Jordan Downs. Zone and its directors gave them a way to build a better life for themselves. The players currently live in Las Vegas and are mentored by Director Kevin Jackson as they pursue their career in Esports. These are the kinds of stories Page and the directors at Zone want to create for players every day.

The directors of Zone do not want to stop there though. “We’re aiming to bring diversity to Esports – when it comes to ownership, when it comes to players, when it comes to content creators.” Their mission is a bold one, and a tough one at that, but they are determined and they are sincere. So, whether they have 10 players or 100 players, $100 or $100,000, every professional who can make a hopeful dream a reality or whose life they can change for the better is worth its weight in gold.

The TEKKEN World Tour Returns in 2020 for its Fifth Season of Bone Crushing Bouts
February 21, 2020