Planet Coaster has been an excellent experience. The team at Frontier Developments PLC have packed it full of amazing depth and enticing gameplay on an incredible level that will have you coming back for more and more. The level of creativity in Planet Coaster is immense, and you can truly build the amusement park of your dreams! Right from the start, you are given access to a sandbox mode that grants you endless resources in order to allow complete freedom to design and build to your heart’s content. Total creative freedom will have you laying pathways, manipulating terrain, building structures, designing roller coasters from scratch, and choosing every little detail (all the way down to the extra toppings you want to include on the food for sale)! Immersion is what every great simulator needs, and Planet Coaster sets an unparalleled standard for any rival game. Whether you are new to the simulator genre or not, there is endless fun to be had with Planet Coaster. This review will highlight all the features that stand out and comes from a gamer who hasn’t played an extensive amount of simulation games in the past (I have played my fair share of simulators over my years but it has never been a style that I regularly played). Regardless, Planet Coaster has managed to solidify itself as a go-to game in my roster of choice. 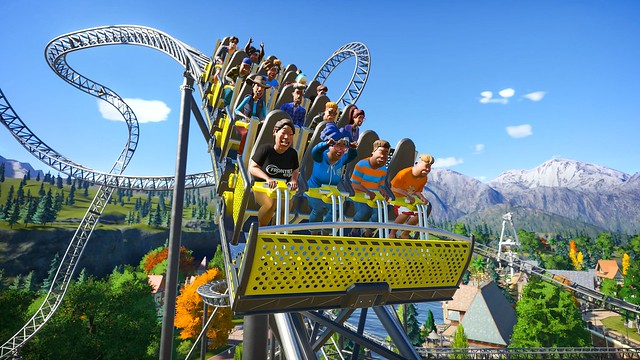 There are numerous aspects of Planet Coaster that have the potential to lure you in for hours on end. One of the more interesting aspects available to you is the “Theme Makers Toolkit.” This allows you to build and model 3D objects in third party programs Autodesk Maya, Autodesk 3Ds Max, and Blender 2.79. These objects can be used at your discretion or shared to the Planet Coaster community through the Steam Workshop. This aspect seriously provides Planet Coaster with endless content.

Whether you want to dabble in 3D modeling or not, there will always be a big community building and uploading blueprints for other users to create amazing parks with. Personally, I do not use any of these programs but I did not hesitate to browse through the Steam Workshop to check out some of the awesome creations that have been uploaded by the community. Limited by only one’s imagination, the Steam Workshop is a treasure trove of creations from recreations of real things to crazy architecture themed around alien planets. Planet Coaster has embraced its community and it shows! Even without the use of the Steam Workshop, there’s an outstanding amount of content offered in the game that players could spend immeasurable amounts of time with. This really helps Planet Coaster display its great value. 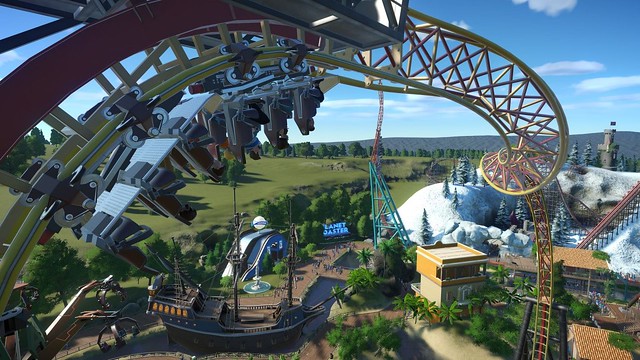 Alongside the base-game, there’s also the DLC that has been released by Frontier Developments PLC. The “Classic Rides” addition to the game brings new flat rides, track rides, transport rides, and roller coasters — all of which are inspired by some of the most classic attractions from carnivals, theme parks, and fairgrounds from around the world. This is only one of the many DLCs available that add much more content to an already packed game. 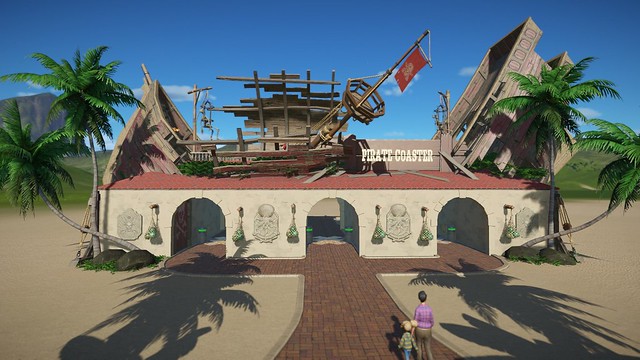 There are four game types available to the player (and all available right at the start of the game): Career, Sandbox, Challenge, and Scenario Editor. First off is the Career mode. This consists of a large list of different fictional Planet Coaster characters who all own theme parks or cool areas worthy of attraction and development. Most of these characters have a list of three different scenarios which describe a different situation that they have been put in. The scenario will likely toss you right into the middle of either owning an established theme park that needs some serious development or has you developing an area (like an abandoned mine) into a theme park worthy of attraction. Each of these scenarios will provide you with a bronze, silver, and gold rating which are paired with their own set of challenges for completion. Sandbox mode, as mentioned earlier, is an unlimited resource mode allowing you to build your wildest theme park dreams. This mode paired with the aforementioned Theme Makers Toolbox and Steam Workshop is full of endless possibilities. The Challenge mode allows you to pick the world’s environment (i.e. tropical, desert, artic, grassland, alpine, and deciduous). You can also choose “Custom” which offers a load of different smaller customizations. You then choose between easy, medium, hard, and harder. Each difficulty will list the changes made to the game in Challenge mode, which vary from starting cash amount to how difficult guests are to attract. Lastly is the Scenario Editor mode. This is an extensive mode where you are able to create your own personal scenario similar to the ones available to you in the Career mode. Offered the same choices for environment as in the Challenge mode, the difference between these modes presents itself once loaded into the game world. This is where you are given access to the settings of things like objectives, research progression paths, demographics, finances, staff, and more. You can build the skeleton of a theme park then lock buildings, attractions, rides, and other objects so players of your scenario cannot delete them. Once your objectives are set and you have built (or not built) what you like, you’ll want to make sure your final settings are to your liking and then you can play it yourself and upload it for the Planet Coaster community to play as well! This is another aspect of Planet Coaster that serves as an avenue for endless content as the community is avidly uploading new scenarios from the Scenario Editor on a daily basis. 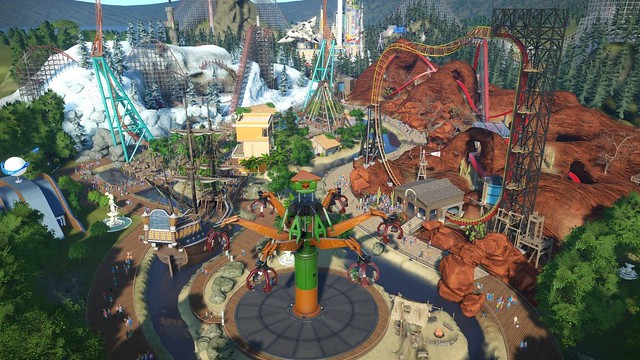 Now to talk about the overall user experience … Right from the get-go you have access to every mode in the game. The Career mode does have a progression system which locks some quests until you have leveled up. There are many quests available right from the start of Career mode so you have the choice between starting with easy, medium, or hard ranked quests. My thoughts going into it (having not played a “Coaster Simulator” for many years) was to look for a tutorial mode. The only thing I was able to find as far as tutorial went was the section labeled “Tutorial Videos” which links to YouTube. Not wanting to watch videos, my next choice was to start with the easiest Career mode quest available with the hopes that it would be somewhat of a walkthrough. Although the quest was not a “hand holding” walkthrough, I discovered very quickly that Planet Coaster has a nice and intuitive UI and menu system. It is clear that tons of thought has gone into making the incredibly in-depth systems of the game easy to access and understand. No matter what you’re doing, there’s a “smart help” button at the top that explains everything you need to know about anything you can use and interact with in-game. After pausing the game world time in order to freeze all my virtual patrons in place and familiarize myself with the systems of the game — down to ticket pricing, staff wages, and extra toppings on my virtual food and milkshakes (which affect thirst, nausea level, guest happiness and more) — I was ready to start cracking away at the objective list. This list consisted of attracting a specific amount of guests and building a certain amount of rides. I started to get it, while happily bobbing my head to the catchy and perfectly fitting music of the game. I was notified of unhappy guests because of the prices I had chosen (across the board from tickets to food) as well as janitorial staff complaining about not enough garbage bins. After some adjustments, I had the prices right and the cash flowing — and found myself with the bronze star objective completed. Being the completionist I am, there was no way I was leaving my first park at only a bronze star. Achieving gold on the first mission really did serve as the perfect stepping stone into any mode the game had to offer … and after having not had the simulator genre fresh in my mind, I was surprised with how fast I was fully immersed in the Planet Coaster world I was creating. 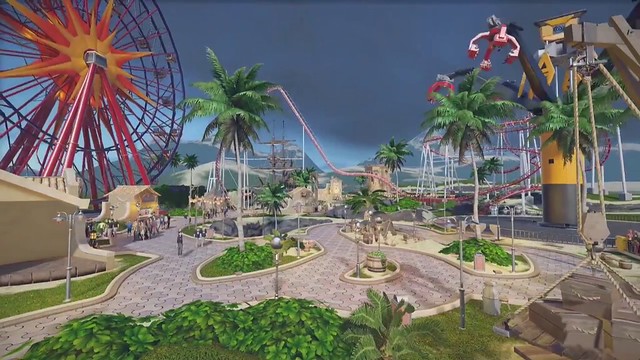 Overall, Planet Coaster has been a wonderful experience and I’ll be playing it for a long time. The in-depth systems paired with the great sound design and pleasing visuals (that really do surprise with a high-end PC) all come together to create a package full of value for the user. With the potential of literally infinite content through the Scenario Editor and Theme Makers Toolbox, the value offered to the player is immeasurable. Whether you’re new to the simulator genre or not, Planet Coaster should be on your list of simulation games on your radar.

Planet Coaster is available now on Steam. As always, you can rely on GamingLyfe.com for in-depth and accurate articles, reviews, and opinions for various aspects of the gaming industry.

Tags: Building, Management, Planet Coaster, review, Sandbox, Simulation
Summary
Overall, Planet Coaster has been a wonderful experience and I’ll be playing it for a long time. The in-depth systems paired with the great sound design and pleasing visuals (that really do surprise with a high-end PC) all come together to create a package full of value for the user. With the potential of literally infinite content through the Scenario Editor and Theme Makers Toolbox, the value offered to the player is immeasurable. Whether you’re new to the simulator genre or not, Planet Coaster should be on your list of simulation games on your radar.
Good
Bad
9.2
Amazing
Gameplay - 10
Graphics - 9
Audio - 8
Replayability - 10
Controls - 9

ONWARD OUT NOW AND IN EARLY ACCESS ON OCULUS QUEST
July 30, 2020