Become a Bun Ambassador today in the Steam Game Festival, Summer Edition with Bake ‘n Switch, a party brawler that really takes the cake! Featuring co-op or PvP party action for up to 4 players, Bake ‘n Switch tasks you to sacrifice adorable dough creatures to the Guardians of Dough in order to progress through increasingly challenging levels. Play this game with your friends and loved ones together as a team or against each other, trying to sabotage your opponents by merging, punching and baking these loveable little Buns before time runs out. The bigger the Buns, the higher the points and the mightier the bragging rights!

From June 16-22nd you are invited to get a taste of Bake ‘n Switch at the Steam Game Festival, Summer Edition with daily activities, such as live developer play-throughs, Discord AMAs and more! You can also enter the daily “Beat the Devs” contest to win free beta keys for you and your team or even reign supreme in “The Master Baker” challenge to win four free copies of Bake ‘n Switch on Steam when the game launches later this summer. Visit the Bake ‘n Switch Steam page for the full schedule of events and get those buns a’baking! 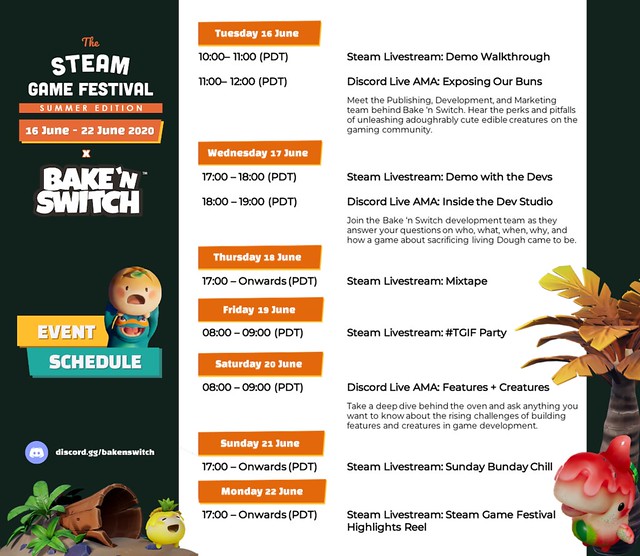 Bake ‘n Switch just passed its Kickstarter with a total of $36,288 raised from 609 backers and will be offering full online and local multiplayer capabilities at commercial launch later this summer when the game will be available on PC and Nintendo Switch. Recipient of several awards, including Outstanding Gameplay, and Visual Excellence, Bake ‘n Switch is the violently cute party game that you’ll want to play again and again. So see if you have the doughballs to reign supreme this week in the Steam Game Festival!