When I jumped from Sega’s Genesis console to Sony’s PlayStation, I remember all the studios that launched new IPs on that platform — and one of them was Insomniac Games with Spyro the Dragon. Ever since then, Insomniac has created franchises with each new console generation for the PlayStation brand and for the Xbox Brand. Yesterday, during the opening night livestream from Gamescom, Sony’s PlayStation announced that it has acquired Insomniac Games as one of the Worldwide Studios. 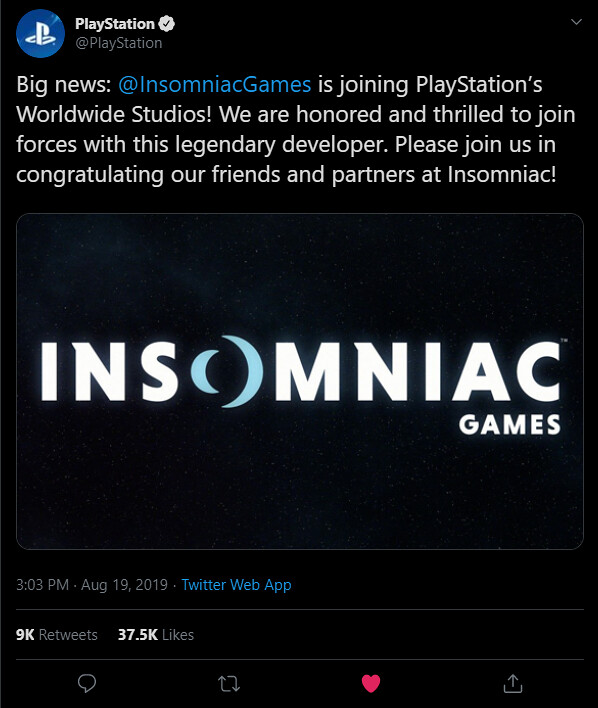 Founder and CEO of Insomniac, Ted Price, sent out a few words to comment on joining the PlayStation family:

“From the Artisans’ homeworld to Veldin, from an alternate-history St. Louis to Sunset City, we’ve created elaborate worlds for more than 25 years that our characters have called home.

Today, we announced that Insomniac has a new home as we join the Worldwide Studios family at Sony Interactive Entertainment. It feels more like a homecoming though. We’ve collaborated with Sony for more than 20 years — spanning all four PlayStation consoles, 20 total games, and six franchises. We still work closely today with many of the same Sony teammates as we did when we released the original Spyro the Dragon in 1998.

The decision to join forces with Sony extends far beyond familiarity. Our studio vision is to create experiences that have a positive and lasting impact on people’s lives. As we look ahead to our future, we know that joining the WWS family gives us the best opportunities to fully achieve that vision on a much larger scale. Further, we believe that Sony shares a similar vision to positively impact players’ lives, their employees’ lives, and the games industry at large.

So, today merely marks the beginning of a new chapter in our studio’s growth and evolution. We’re excited to put Insomniac in the best position to deliver fresh experiences for our fans for many years to come. Our structure and approach will remain intact across both Burbank and Durham, NC studios, and we will continue to cultivate our unique culture.

It’s been a crazy ride, for sure. Now, we’re ready for the next phase of our journey, and can’t wait to explore new worlds with our Sony family and loyal fans.

As a longtime fan of Insomniac Games, I have to admit I was a little shocked to see this (as were a lot of people on social media). I thought Insomniac Games was already apart of PlayStation’s Worldwide Studios, but as they say … “you learn something new every day.” Sadly, I don’t think we will see Insomniac work on Sunset Overdrive 2 for Microsoft, but with Microsoft owning that IP (at least I think they do), they will probably find another studio to work on a sequel if they decided to use it again in the future. Either way, I am happy for everyone at Insomniac Games as they all work hard to make games that gamers all over the world will enjoy. All that’s left to say is congratulations Insomniac Games on joining the PlayStation family!

Stay tuned for more from GamingLyfe.