A new kind of First Person Shooter? Paradoxical Tactics? Time Travel with meaningful consequences – in a mullti-player game?  No need to brush up on your Quantum Mechanics degree yet.

To train aspiring Quantum Athletes looking to master Space and Time in a revolutionary first person shooter, developer and publisher Nimble Giant Entertainment has put together a recruitment trailer for their upcoming Quantum League. Check it out!

Quantum League is an innovative arena shooter where players compete in 1v1 and 2v2 matches with a ‘time loop’ feature that allows the Quantum Athletes to tactically team up with their own past selves to win.

The objective is simple – score a goal by dominating the Goal Zone at the end of the loop. But Quantum League’s time loop fundamentally changes the way you move, shoot, die and score creating a unique and fun fast-paced arena shooter with endless tactical depth.

The recruitment trailer focuses on the most distinctive and unique aspects that sets Quantum League apart from other competitive shooters, aiming to help viewers start understanding the game mechanics and time loop effects, in order to better appreciate the advanced strategies that can be deployed to succeed in each play session. 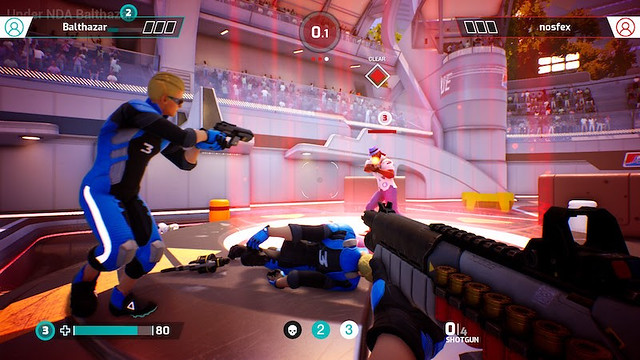 This primer will have you climbing the leaderboards in no time, as you team up with your own clones to take on your opponents in 1v1 and 2v2 matches.

An early prototype of the game, was showcased in the Experimental Gameplay Workshop at GDC 2018. The following year Quantum League won best Latin American game Award at the Brazil’s Independent Games Festival.

Get Ready to Rumble! The Popori Brawler Enters the Ring on TERA Console!
January 28, 2020

DIVE INTO SOME PIRATE SHENANIGANS WITH YOUR FRIENDS IN ONE PIECE: PIRATE WARRIORS 4’S ONLINE CO-OP MODE!
January 28, 2020