It seems the Red Dead Redemption 2 PC rumors have returned once again, but this time, in a place I didn’t think to check. For a while now, rumors of a PC port of Rockstar’s most recent game have floated about … yet nothing has come of said rumors. This time around actually could make it a reality! A PC version of Red Dead Redemption 2 is something Rockstar’s Social Club website officially recognizes, despite not having been officially announced. Twitter user @JakoMako51 spotted references to the PC version in the site source code. 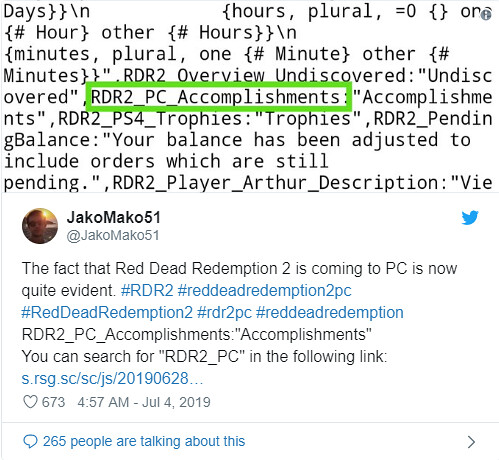 You can see the source code for yourself at the following link right “here” — it honestly took a trained eye to find it, but it is there. In said code, the only other mention of PC is for Grand Theft Auto Online. When Red Dead Online is listed, it’s only accompanied by code for PS4 and Xbox One … not PC.

Now, this hardly confirms a PC version of Red Dead Redemption 2 is on the way or even being made right now. Rockstar may have (most likely) simply done the necessary work to ensure the Social Club website supports the PC port, should it ever become a reality.

That being said, evidence has been popping up left and right about the PC version’s existence pretty much since before the game’s first release on consoles. More recently, mentions of the PC port were scrubbed from former Rockstar dev’s resume … which is highly peculiar in my book.

Assuming Rockstar follows a similar release cadence to that of GTA 5’s, Red Dead Redemption 2 will most likely hit PC 18 months after consoles … so at some point next year, give or take a month. It may appear sooner, of course, but Rockstar has yet to even acknowledge the port’s existence so we have a bit of time to go still (again, that’s if a port actually will happen).

Personally speaking, I believe Rockstar will be announcing a PC port of the game sometime soon as their big games almost always come out on that platform. When you look at the original Red Dead Redemption, it took eight long years to come to PC for gamers wanting to play it. Grand Theft Auto 5 arrived on PC 17 months after the PS3/Xbox 360 versions, and five months after the Xbox One and PS4 versions (a much shorter time frame). But with how large a team was needed to create it, a team to port the game would possibly be half of the development team. So, I think that everyone at Rockstar is split into two teams at the moment … one porting Red Dead Redemption 2 to PC while the other is possibly working on Grand Theft Auto 6, after which they will be joined by the team porting Red Dead Redemption 2 (at least that’s what I’m thinking).

What are your thoughts? Be sure to stay tuned to GamingLyfe for more.