Remnant: From the Ashes by Gunfire Games released on August 20th, 2019 and was definitely a sleeper in terms of games coming out this year … and now that it has arrived, it has attracted some attention from gamers pretty quickly. With its souls-like gameplay, many gamers are finding themselves being pulled into this survival-horror experience. Within the first few hours of picking up the controller, tension is built and you’ll find yourself slashing and shooting your way from one checkpoint or boss to the next. Remnant wastes no time in grabbing the player by the hand and throwing them headfirst into this dark and challenging world. So, the question on a lot of minds is … is the dive into Remnant worth taking?

First up is you are treated to creating your own character. The options are pretty limited compared to most creators out now, but there’s just enough to give you some choices. You’ll have different faces, hair, facial hairs, and scars to pick from. You can even select your own voice, which is a feature some games tend to overlook.

After you’re done making your character, you’ll have the opening cutscene and then you can dig right in. The world is unique in how it looks and feels. There’s a nice blend of open space and cover to utilize. This allows for more tactical approaches, especially during online play. You’ll find yourself moving into no man’s land while jumping from cover-to-cover to push deeper into the level and the story arcs. 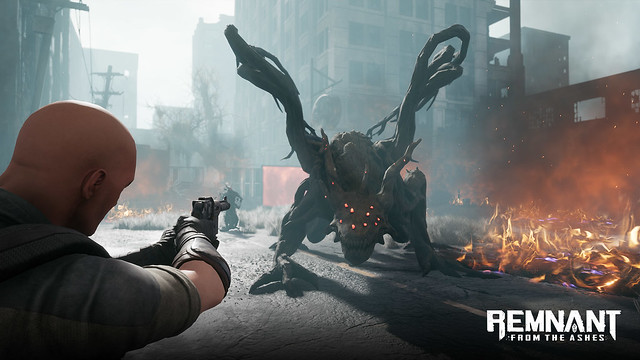 The combat is where this game shines. The gunplay is snappy and crisp while mixing in an easy to use melee system that really allows the whole fight taking place to flow more naturally than other shooters. You can truly feel how fast paced these scenarios can be, and it becomes the lifeblood of Remnant. However, playing as a melee build at first can feel a little underwhelming compared to some of the other long range classes.

Remnant also has a solid trait and mod system in place. These items and abilities add some depth to game progression other than just leveling up. They help breathe life into whatever build you are striving to make. Whether that’s an up close and personal build or a long range sniping loadout there’s mods and traits to help you make the most out of whatever you set out to do.

The controls are natural and extremely comfortable. This is a great feeling because it definitely makes exploring the world more enjoyable, and when you need to shift from tourist mode to combat, it’s really simple to make that adjustment. The inclusion of being able to change which shoulder you’re looking over was a beautiful feature that Gunfire Games didn’t need to include, but after using it I can’t imagine this experience without it. The dodge mechanic, however, can be a little jarring at first but is manageable once you get used to how it behaves. 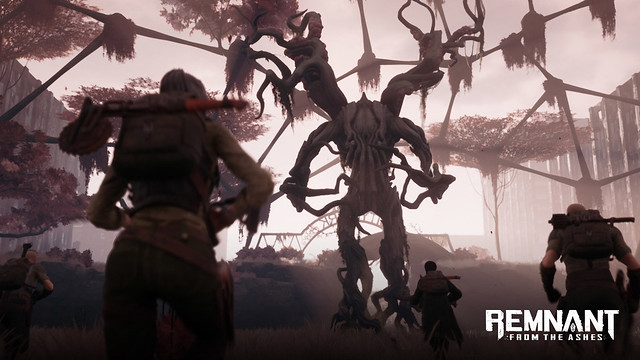 One feature that stands out above the others is the ability to reroll your campaign. The world is generated with a randomizer … Each playthrough and each game will not have the same layout. While some rooms will be the same, one world will not be 100% identical to another. This is especially nice during co-op play as it keeps the environment fresh. That being said, you are at the mercy of RNG when it comes to what you get. You could end up with a wonderful layout that’s incredibly fun to explore. On the other hand, you could also end up with a bunch of “T” interactions leading to dead end after dead end … but of course, that’s completely fixable via the reroll option. The drawback of this feature though is that it keeps the developer from being able to put high amounts of detail into each “block” so to speak. Sometimes it can get a little crowded with boxes or other debris, but it’s nothing too major that it pulls from the experience.

Graphically, Remnant looks great — from the environmental displays, to the weaponry. It may not be the prettiest game out there but the art, animations, models, and overall design are a perfect fit for this world. The only problem I encountered was some minor rendering issues where some of the textures were blurred for a few moments as they loaded in. It didn’t break the experience as it was very minor but it did cause a little bit of a distraction during cutscenes which pulled from the immersion.

The audio in Remnant is definitely what you’d want from a game like this. It is clear and vivid, allowing for a deeper level of immersion. There were many times during a gunfight that I heard the sounds of an enemy closing in from behind, causing me to smash my dodge button and narrowly avoid a devastating blow. When firing guns or swinging a melee weapon, you can hear the power behind what action you are doing as the gun sends a bullet downrange or a sword slices through the air to find a home in an enemy torso. The NPC dialogue feels realistic. When they speak there’s no unnatural pausing in sentences, which helps bring life to the characters. There are subtle nuances and quirks in how each person talks that drives home the feeling of the character being a piece of this world. 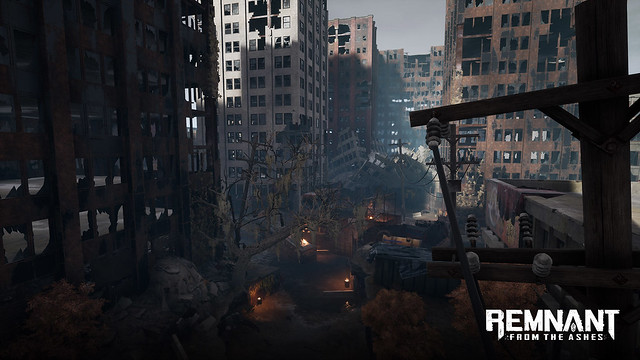 Another aspect that Gunfire Games gets right is the difficulty. The combat and world is challenging and rightfully so. Dying will be something that you will definitely experience, and while Remnant does take on a souls-like feel, there is no experience loss when you die. This helps alleviate some of the tensions of a wrong move since all you’ll have to do is restart from your last checkpoint and not have to worry about scrambling back to your corpse to retrieve anything.

One feature that we are waiting eagerly for is adventure mode. This allows players to select an environment to load into and explore, and face off against a boss in that zone and try farming for loot drops from that specific encounter. With the projection being September 3rd, there’s still plenty to do and get acquainted with before then. While it does pull back from the overall experience not having in it at launch, they are adding it in relatively quickly and Gunfire Games has stated that it won’t be the last they implement, not by a long shot.

Tags: Action, Adventure, co-op, Gunfire Games, Perfect World Entertainment, Remnant: From the Ashes, review, Souls-like, Third-Person shooter
Summary
While Remnant: From the Ashes doesn’t bring much innovation to the table, it does bring refinement. What the game does, it does well. It’s a breath of fresh air amongst a lot of the other games that are released lately. There's a charm and satisfaction that comes with exploring the world and leveling your build. It feels like Gunfire Games went back to the basics on what makes a great action game and drops you right into crossfire early on, and it holds onto that throughout your adventure. All in all, Remnant earns a 7.5 out of 10. It provides a solid experience, and that experience only gets better with friends. You can find yourself sinking hours into Remnant without realizing it, and that’s always a good thing! Sadly with some features not being available at launch, that does hurt what the game currently has to offer. What it does have though is still good content and well worth the investment. With that said, Remnant: From the Ashes has a promising future ahead of itself.
Good
Bad
7.6
Good
Gameplay - 8
Graphics - 7
Audio - 8
Replayability - 7
Controls - 8

Written by
Alucard Achared
I live for gaming. The worlds, the characters, the relationships between them, the art, and the music. Everything about games fills me with joy. I love being able to find myself getting lost in an open world with endless opportunities to explore and just be myself within it. It doesn’t matter what the game is I will find something to enjoy. All the way from table top, to RPG, to FPS, VR, even Rhythm. Gaming is an art all it’s own and each art piece has its message. I love digging deeper and finding that hidden meaning. In the end, what really matters is having fun on the journey and the emotions you feel along the way. That’s the joy of gaming to me. Follow me on Twitter , or come hang out with me on Twitch.

0 0
Previous ArticleRemnant: From the AshesNext ArticleRisk of Rain 2 Now Available on Nintendo Switch™, PlayStation®4 and Xbox One

Remnant: From the Ashes

The world has been thrown into chaos by an ancient evil from another dimension. As one of the last remnants of humanity, you must set out alone or alongside up to two other survivors to face down hordes of deadly enemies to try to carve a foothold, rebuild, and retake what was lost.
7.7
Average User Rating
2 votes
Click on a star to submit your own rating!
Your Rating: 0
Submit
Genre:Action, Survival, Third person shooter
Developed By:Gunfire Games
Publisher:Perfect World Entertainment
Platforms:PC (Steam), PlayStation 4, Xbox One