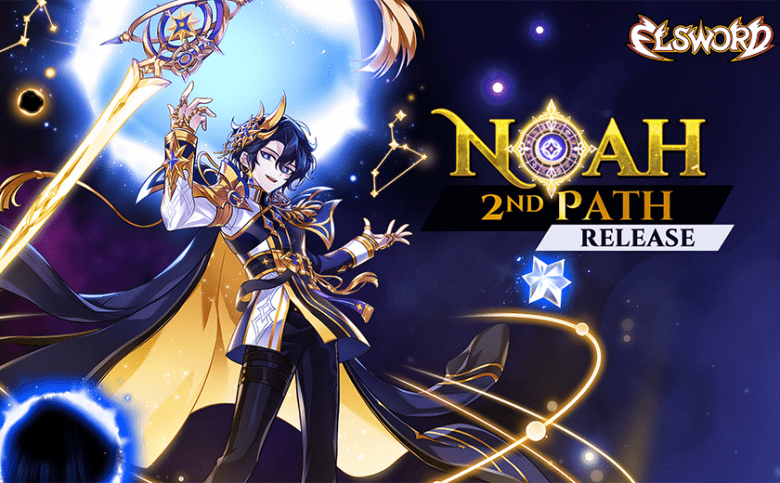 KOG Games, a leading developer and publisher of popular free-to-play action MMORPG Elsword, is unveiling Noah’s Second Path – Celestia. This Second Path has complete mastery over the celestial power of the stars to both lend aid to his allies and devastation to his enemies. To celebrate Celestia’s release, Elsword will also be holding a multitude of celebratory events from February 10th 2021 to February 24th 2021.

As Celestia, Noah overcomes his desire for revenge and accepts the tutelage of Clamor, a former elven scholar who is Noah’s close friend. Through his increasing knowledge of Magic, Noah concentrates his studies on the great flow of the sun, moon, celestial bodies and the power of time within himself. He becomes the “Observer of the Constellations” travelling between the memories of the cosmos and the present.

Celestia wields both the Sickle and Magical Cards as his primary weapons, which allows him to harness the power of constellations. As he draws his power from Space itself, Celestia’s options are just as vast and powerful. This allows Celestia to support his allies through healing and buffs, while also allowing him to rain down meteorites, stars and even planets upon his enemies. But be cautious as the entropic nature of Space may be difficult to control leading to side-effects – both good and bad.

During the period of Celestia’s Launch, Elsword will be celebrating the Noah 2nd Path Update Event which is specially designed to help jumpstart your Celestia with rewards like 50% EXP Boost Medal, Consumable Potions, Mounts and more! Furthermore, once you finish the event, you can claim a [Luriel] Mark of Bonding which is an exclusive Celestia-based accessory created for this event!

In addition, login during the weekend for the Noah 2nd Path Update Special Weekend Event! From February 13th to 14th, we begin with the “Weekend Burning!” Event which awards players with up to 100 Sage Stones or 160 Spectral Amethyst which can be used to socket or reforge their gear to be stronger. And from February 20th to 21st, players can enjoy a “Hot Burning Event!” with 2x EXP on Saturday February 20th and 2x Drop Rate on Sunday February 21st.