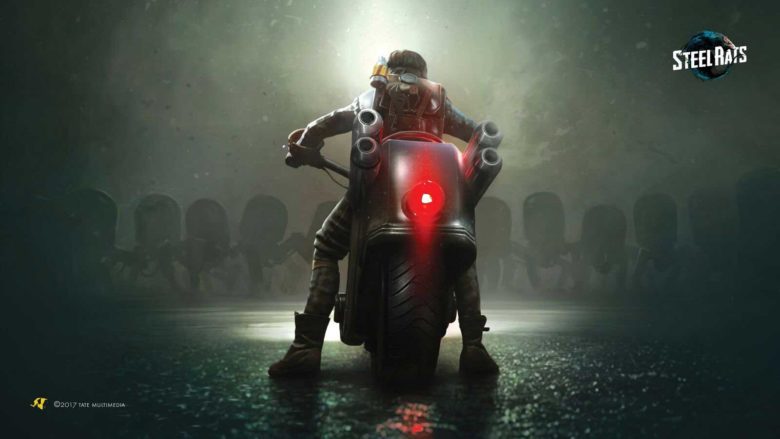 Prolific Polish publisher and developer Tate Multimedia are strapping on their spiked shoulder pads and fire spewing wheel saws as they today announce that the all-out motorbike action title ‘Steel Rats’ is coming to the Playstation® 4 computer entertainment system, Xbox One and PC in 2018.

Become one with your bike as you master the realistic physics based controls of these powerful and deadly vehicles. Choose how you want to tear through the stylised and highly detailed environments of Steel Rats, traversing up, down left and right as your bike speeds fluidly in and out of the game world, over rooftops and through enemy-infested tunnels.

Join the Steel Rats, a larger-than-life punk biker gang, who once ruled the streets of Coastal City who now find themselves as the last line of defense against an invading horde of destructive and constantly evolving army of junkbots. Choose your character and unlock new special abilities and customisable bikes to fight with style through vast areas of the city in a deadly mix of speed, agility and firepower.

Steel Rats features music from the Japanese rock trio ‘The 5.6.7.8’s’, who shot to fame after being featured in “Kill Bill Volume 1” with their hit song “Woo Hoo”. A remastered version of their track “Hoovering” will be featured in Steel Rats and was recorded exclusively for the game in the famous Parisian “Midilive Studios”, where music for films such as “Taken” and “Hellboy II: The Golden Army” was also recorded.

“Steel Rats is set in an atmospheric, stylised, retro future version of 40’s and 50’s Americana”  says Jacek Gburczyk, Tate Multimedia art director. “We’ve taken everything we love from America in that time period and mixed it up with our favourite parts of dieselpunk and steampunk influences to create something that has a wholly original feel and character”.

Wojtek Biliński, head of studio at Tate Multimedia says “In terms of gameplay, we want to have something for speedrunners, racers, brawlers, stunt drivers and all those who want to pull off insane and stylish fight moves from the back of a turbo powered motorbike. We hope that everyone will enjoy playing Steel Rats in one of these ways and discover the many styles of gameplay we aim to deliver”.

Today’s announcement sees the release of an explosive CGI trailer, created by Deep Blue Studio, featuring ‘The 5.6.7.8’s’ and their track ‘Hoovering’ with plenty more news and information on Steel Rats still to come.