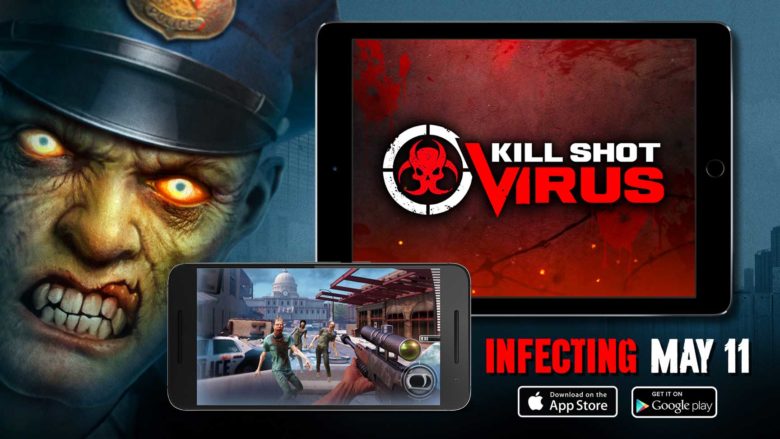 Kill the zombies before the virus kills you – and all of humanity!

Hothead Games, the developer and publisher of top-grossing shooter games on mobile, announced today the upcoming release of the creepiest, most vivid zombie shooter game on mobile, Kill Shot Virus.

The third installment of the company’s adrenaline-fueled Kill Shot franchise will be available for iOS and Android devices on May 11th, but players can watch a trailer and sign up to receive exclusive founders items now by visiting www.killshotvirus.com . Android users can also pre-register for the game through Google Play at https://goo.gl/4z0U5r.

In Kill Shot Virus, a zombie outbreak threatens to infect all of humanity. The only hope of saving mankind from mass extinction is for players to take out the zombies with a heroic mix of high-powered guns and sharpshooting mastery. Featuring the heart-racing First Person Shooter (FPS) action and intense graphics that have become the franchise’s trademark, Kill Shot Virus takes it up a notch and introduces more up close and personal shotgun and assault missions. Also new Urban Onslaught and Urban Pandemic event modes have been included to take the FPS genre to another level.

As survivors of a terrible apocalyptic event, Kill Shot Virus players are expected to save mankind by using deadlier guns, more sophisticated gear, and more social gameplay than any other shooter game on mobile. The game will include exciting features such as: