So, when I first heard about this game. I was super excited about testing it. It combined two of my favorite things: horror and techno. So, when I was able to play it finally. I shortly found I was highly disappointed. Now I will say that the graphics and controls were pretty good. The downfall, though, for me, was the goal, not any horror scenes and the music even though it was good. It got repetitive. Now when you first start the game, you see an excerpt from the Satanic Bible as it fades away, you are in this purplish-white smoky cylinder. On one side, you see darkness on the other. You see the light with pillars around a table. As you go up to it, the smoke you were in fades away, and now you are in line with people in blackout neon face masks. You do not hear any music, and the only thing you told is to grab a phone and connect to the Wi-Fi. The premise is this following a promise of the ultimate expression of freedom, you find yourself at the Headless Rave Festival. However, that freedom comes at a cost as the organizers announce that the price of admission is all attendees’ lives. Find a way to escape, even as the forest itself appears to work against you. Try to maintain a grip on reality while logic takes a backseat. And whatever you do, stay away from the sinister presence in the darkness. 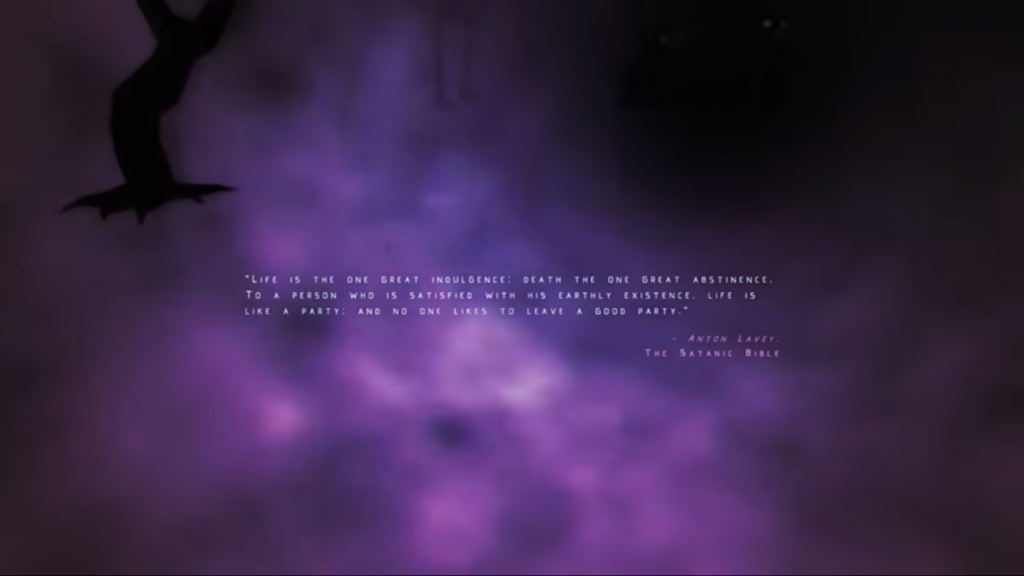 So, during the game, the only thing you keep in your inventory is your phone. You must connect it to the Wi-Fi in the different areas you visit. As it tells you small clues on what you need to do or where you need to go or share photos you take. Other than that, you do not have any direction on where or what to do. The goal of the game also was not obvious. Having to check your phone every few minutes got quite old real fast. I like having the option to see the goal off to the side and not being told on the phone. While I was playing it, I thought there would be some horror elements to the game, as the title implies. But besides small jump scares, there is nothing scary in the game to me. If your game has the word horror in it, it needs to be scary. Having a few jump scares or attacking one of the ravers coming after you. It is not enough to get me scared and be like, oooh, this is a horror game that I would like to keep playing. Now the music even though it was good. It did get repetitive. Now I never have been to a rave, so this game was like my first experience. But I do not think rave music repeats as this music does. And to have your game based on raves and horror, there should be more rave music than just the one beat repeating. Now the graphics and controls were not too bad, and I think as the game progresses, they will get better. For controls, they are look, move interact, back, swing or shove item, use item, swap item, drop or throw item. Latest message, change Wi-Fi, lock, or unlock phone, dismiss notification, open notification. Sprint and menu. For this game, I think the controls were right for the game. The graphics on my laptop, which I have one of the HP gaming laptops, was good. I had no problems with them, and I also maxed it out on the options.

I am hoping that with new updates and different expects of the game. It gets better. Cause it does have the potential to do better, but for right now, it is lacking.

Tags: Adventure, Green Tile Digital, Horror, Mystery, Psychedelic, Strobophagia - Rave Horror, Survival
Summary
Strobophagia is a survival horror game with a unique psychedelic forest rave atmosphere. In the currently released alpha version, players can explore an early slice of the Headless Rave festival — where they can either attempt to escape or solve the mysterious rave’s “rites” in order to experience two distinct teaser endings. The game uses a unique smartphone-mechanic, which allows players to follow the wi-fi signals of various pirate boxes, scattered around the forest rave, in order to find their way around the festival grounds. This also allows the player to communicate with the other attendees connected to the individual networks.
Good
Bad
6.2
Fair
Gameplay - 5
Graphics - 8
Audio - 7
Replayability - 2
Controls - 9