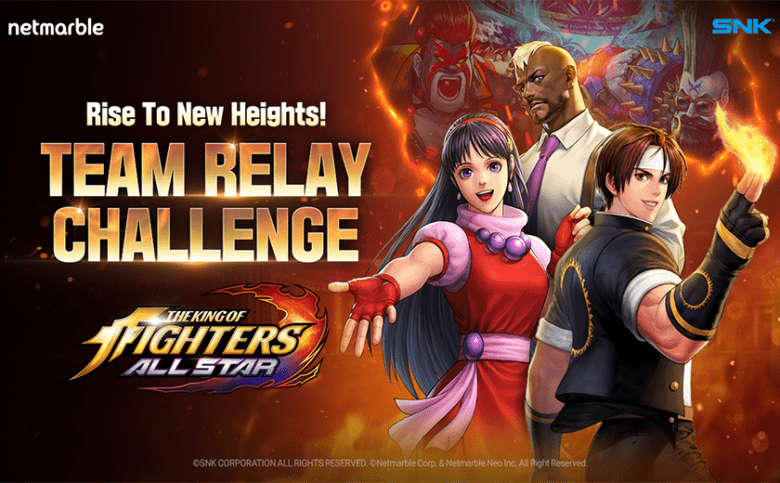 The latest update for the popular mobile action role-playing game (RPG) THE KING OF FIGHTERS ALLSTAR from Netmarble introduces several new features to the game, with new dungeons, events, and rewards awaiting new and regular players looking to grow even stronger.

The update includes an advanced version of THE KING OF FIGHTERS ALLSTAR’s Team Relay mode, Team Relay Challenge. In this mode, players are given two minutes to inflict as much damage to a boss with only two teams of three fighters. By strategically playing with suitable fighters across two stages in the Team Relay Challenge, players can look forward to higher rankings and in-game rewards offered in accordance with their rank.

The other new feature added through this update is Hard Element Advent. This new feature consists of the dungeons of five attributes, each with 25 tiers, where players have to defeat monsters using three fighters within the time limit. It is the most advanced dungeon feature that will provide a unique gameplay experience with more strategic play focused on attributes and buff combinations.

The KOF ALLSTAR Pass has also launched to complement the new update, allowing players to earn Pass Points that can be redeemed for in-game rewards by completing missions. Players also can upgrade their passes if they wish to receive special rewards on top of basic rewards.

Other updates coming to THE KING OF FIGHTERS ALLSTAR include

THE KING OF FIGHTERS ALLSTAR boasts fast-paced fighting action as players battle through waves of enemies, giant bosses, and rival fighter teams. The excitement is paired with cutting edge graphics, bold colors, and lightning-fast animations. In addition, this game features all of KOF’s classic fighters from ’94 to XIV, with more than 130 fighters available to collect, along with more to come with seasonal events, collaborations with popular IP such as TEKKEN 7 and SAMURAI SHODOWN, and additional content updates for players to enjoy.