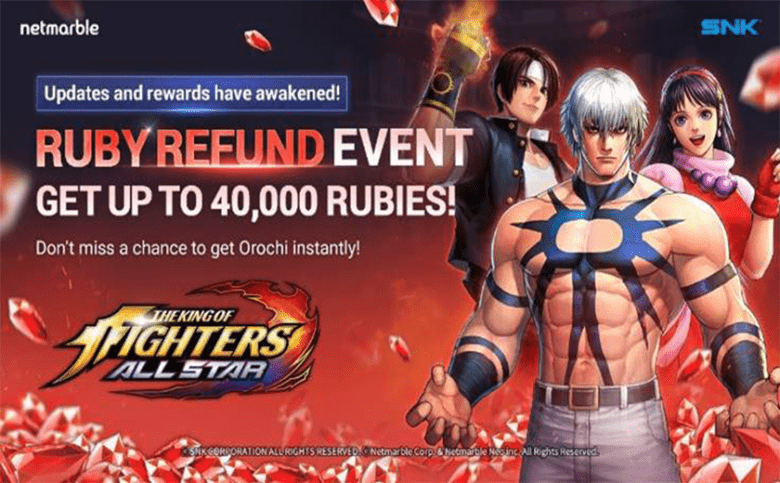 The limited-time ‘Ruby Refund’ event awards players additional Rubies depending on how much they used previously, and a variety of events for daily mission, access and new entry offers further – for a potential total of 30,000 rubies for new players and up to 40,000 for existing players. The Rubies provided through this event can be used for only a limited period of time from June 4 to July 23.

Another new addition to THE KING OF FIGHTERS ALLSTAR is the ‘Awakening Feature’. Players can now awaken fighters who have reached Level 90 with new ‘Awakening’ and ‘Imprint’ materials earned from the recently introduced ‘Awaken Dungeons’. Once awakened, fighters will have access to powerful Awakening skills, further stat boosts, and other benefits, with a maximum rank of five awakenings possible for each fighter.

THE KING OF FIGHTERS ALLSTAR boasts fast-paced fighting action as players battle through waves of enemies, giant bosses, and rival fighter teams. The excitement is paired with cutting edge graphics, bold colors, and lightning-fast animations. In addition, this game features all of KOF’s classic fighters from ’94 to XIV, with more than 130 fighters available to collect, along with more to come with seasonal events, collaborations with popular IP such as TEKKEN 7 and SAMURAI SHODOWN, and additional content updates for players to enjoy.