DEADLANDS: THE WEIRD WEST is entering its final week on Kickstarter:

DEADLANDS: THE WEIRD WEST Kickstarter campaign features a new edition of this award-winning roleplaying game, revised and updated for Pinnacle’s Savage Worlds Adventure Edition rules. Players take on the roles of a range of western characters, from tough law dogs to magical card sharps, from gadget-wielding mad scientists to gun-toting bounty hunters. These heroes travel the Weird West to drive back the evil that threatens to engulf the land and plunge it into mayhem and fear.

Pinnacle President Shane Hensley said, “Since 1996, Deadlands has been at the foundation of Pinnacle’s success. It’s been out of print for two years while we waited for the update to the core rules that power all our games, the incredibly successful Savage Worlds Adventure Edition, and now we’re bringing the Weird West back in the biggest, boldest way we can imagine! We’re fortunate, proud, and humbled at the incredible response we’ve received already. It’s a perfect time for old fans and news to jump on board and join us in one of the most enduring settings in the entire gaming industry.” 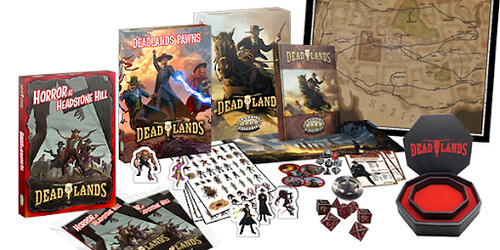 “We’ve had a great start to the campaign,” said Chief Operating Officer, Jodi Black. “Fans of Savage Worlds and Deadlands fans—old and new alike—have been excited to return to the Weird West in this amazing new edition. We are looking forward to a strong finish to the campaign on May 12th, with some exciting new items yet to be revealed.”

The Kickstarter will run until May 12th and has already unlocked great new content for the Weird West, with more exciting reveals planned.