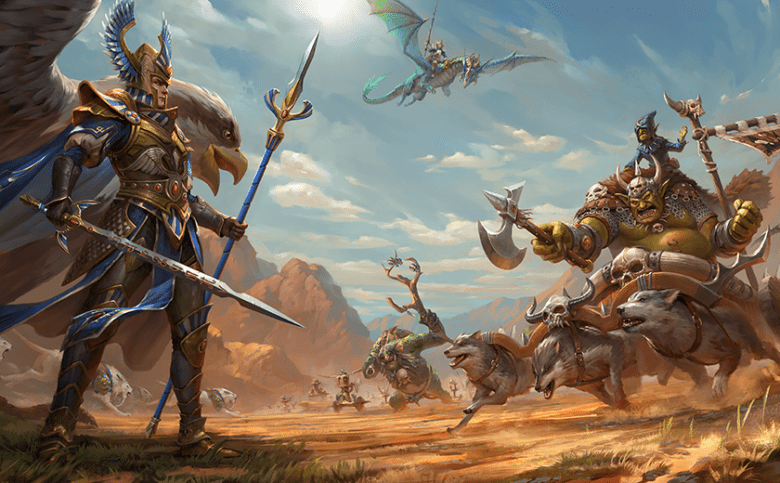 Out May 21st, The Warden & The Paunch introduces two new Legendary Lords for the Greenskins and High Elves races, both featuring in an interwoven campaign that culminates in an epic showdown that will determine the future of the fabled Kingdom of Yvresse.

Watch these fierce rivals face off in the latest trailer:

Warlord Grom, known more famously as Grom the Paunch is the only Greenskins warlord to have ever successfully invaded the fabled isles of Ulthuan, home of the High Elves. Both bloated and unstoppable, Grom is an indomitable character blessed with supreme power and a WAAAGH! eager for fightin’.

Eltharion, Prince of Yvresse, is one of the most renowned High Elves in all Ulthuan having achieved what many of his kin consider impossible many times. Mounted atop his ethereal griffon named Stormwing, he is vengeance incarnate, and will do all that he can to protect Yvresse from the forthcoming green tide.

Brute force meets deadly elegance as a host of new units take to the battlefields of the New World. These harbingers of death range from new hero units such as the Arch Mage and Giant River Troll Hag to devastating ground troops such as magical Rogue Idols, the majestic Arcane Phoenix, and the deadly War Lions of Chrace.

Prince Imrik of Caledor will be free to all Total War: WARHAMMER II players. This mighty Lord of Dragons has never once broken an oath to a friend and is determined to help Eltharion defend the realm against the mighty green tide that stands before them.

Alongside this DLC pack a new update for all players of Total War: WARHAMMER II will be ushered in. This Old World Update consists of considerable quality of life improvements to the Greenskin faction including improvements to the WAAAGH! mechanic, chariot mounts and much more.