Ivanovich Games is proud to announce that Party Arcade Racer Touring Karts is out now on PlayStation VR and PlayStation 4 at a price of 19.99 USD / 19.99 EUR (15% off during the 2 first weeks after launch for PS Plus subscribers), the game is also available on Steam and Oculus Store. Coming later on to Nintendo Switch and mobile devices, Touring Karts offers Cross-Platform Multiplayer for up-to 8 Players Between All Platforms Without Requiring a VR Device, thus granting the party for every player, regardless where they are and the device they use.

To celebrate the launch and get closer to their community, Ivanovich will host an Ask Me Anything (AMA) on Reddit tomorrow, 13th of December, at 4PM (GMT) / 11AM (EST), under /reddit/r/PSVR. 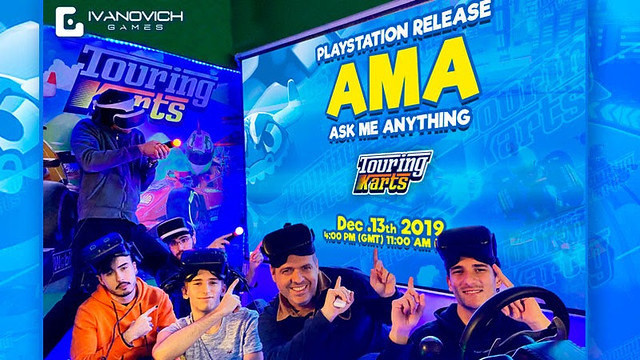 Until the 22nd of December, everybody who comes to compete online in the Touring Karts Steam Demo will unlock the full Touring Karts game by winning 3 races in a row, and also get an extra Steam code for a friend if they win 5 races in a row. So now it’s time to test your racing skills show off what you are made of! You can check and support this campaign on Twitter, Facebook and Instagram.

“Overall Touring Karts is a blast! It gave me exactly what I wanted out of a VR karting game. The tracks are wacky and fun, the graphics are clear though simplistic, both the singleplayer and multiplayer are fun to play, and there are a ton of options for all players. If you enjoy Kart racers, this game is a must have.”  PSVR Review.

For the first time in a home VR system, Touring Karts will make you feel like playing an arcade Kart game. Players will be able to choose from 6 different control schemes:

Master your racing skills while interacting with the environment as if you would be doing it in the real world. Get ready to make your way through the first place while throwing ice cubes, chickens, bombs, shoot bazokas, smashing your rivals with a giant hammer, and also take a break in the middle of the chaos to recover your health by drinking energetic beverages!

“As fans of F1 and the Mario Kart saga, we were missing an experience that united these two worlds taking advantage of all the possibilities that Virtual Reality can offer. We wanted to bring all the excitement and crazy fun of the kart-type arcade games into a universe where we always find new challenges and where we can compete with our friends. ”-Ivan Cascales, Founder and CEO at Ivanovich Games.

With the help of the community, Spanish Developer Ivanovich Games has been compromised to keep polishing and adding features to Touring Karts since it was launched about 3 months ago on Steam Early Access, we want to thank our community for their continuous feedback and support.