The world of hackers and cyber technology is back with this third iteration of Watch Dogs. Watch Dogs: Legion is a bold and ambitious game choosing to get rid of the standard protagonist with a build your team from the ground up. What that means is, the player controls anyone at any time. You are given a choice to choose a randomly generated character and build from there. Then you have the power to recruit anyone on the street to join the cause of Dedsec.

The story of Legion is simple at times with a police force of Albion trying to take control of the whole city and you are tasked to recreate a shambled Dedsec after a big incident happens. While rebuilding your team, you uncover the secrets of what happened as well as stop the forces from taking over.

The game mechanics are as fun as it was in the previous games hacking any piece of tech that is operated by the Central Operating System (ctOS). Lucky for you in this futuristic world of Watch Dogs, pretty much everything is powered by it. Upgrading the ability for tech improvement is as easy as collecting tech points to spend. These Tech points are gathered by completing missions as well as scattered throughout the world. There are a wide variety of upgrades from increasing bullet amount, improving your own tech, to even disabling or hacking enemy drones. 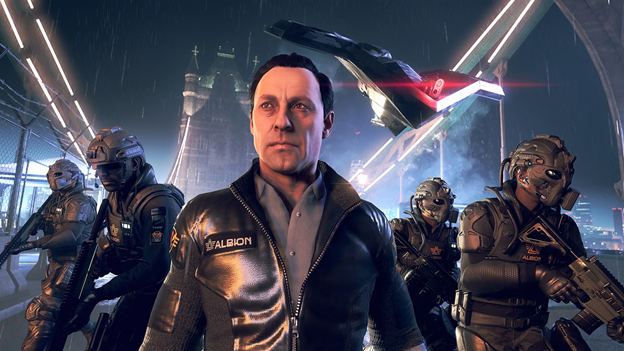 The world of London in Watch Dogs: Legion looks incredible. I played on the PC with the power of the old console generation and that already looks great. The next generation of consoles playing this game will look even better with the help of ray tracing. Unfortunately, the characters in the world do not look great, but that is to be expected for an ambitious “play as anyone” game. The characters look like they are basic randomly generated characters in a character creation screen. Which makes me wonder why not include that feature in the game. Then again I remember the point of this mechanic is to have players play the different styles of each character. It’s a shame that the different character types start to feel not so different as you build a huge group.

When immersing yourself in the world of this futuristic world. You can hear that London is well lived and real. The different radio stations are good with familiar songs as well as podcast type news to catch players up. One of the big downsides is that the voices may not match the person. When recruiting a specific character who just appeared older, she was provided with a forced grandma voice. Whenever that character speaks and I hear the old frail voice of an older lady, it takes me out of immersion.

On paper, seeing or hearing the ability to play as anyone that you are able to recruit in an open world game sounds enticing and it certainly is. Unfortunately, as you recruit a huge amount of members to your team. The missions start to feel the same. Replaying the same mission over and over again can get quite tiresome. Don’t let that stop you from playing because the game still is enjoyable with tons of missions to complete. Ubisoft also has a plan for more content that contains a season pass with more missions as well as an online mode for players. 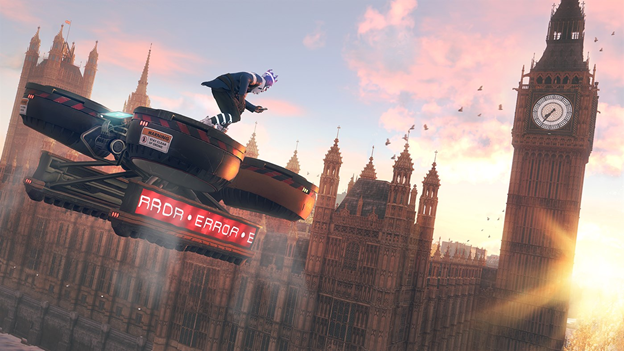 The control of Legion is like any of the previous iterations. If you’ve played an open world Ubisoft game. You know what you’re in for. The feeling of driving in this futuristic London is a bit cramped. What I mean is that the vehicle your driving goes too fast in the small roads in small alleyways. The world is amazing and accurate, but when you’re behind the wheel of any of the cars. You have to drive with caution and precision.

When it comes to fleeing from the Albion forces though that’s a different story. Sure speed is on your side but that same speed is the same when it comes to the Albion. The Albion cars are able to catch up to you and try to run you off the road. Not only are the cars trying to stop you, the drones will try to apprehend you as well. With that you’ll have to combat them with hacking the ctOS tech all around the city.

Hacking the tech does get a bit hard as there is quite a lot of tech all around the city. So that means you’ll have to try to aim your cursor to the correct object. This can be difficult as the town is filled with an enormous amount of tech. While trying to aim at a flying drone to shut it off was a pain as the cursor would lock on to other objects. It’ll all be worth it though, once you start to get the hang of it. 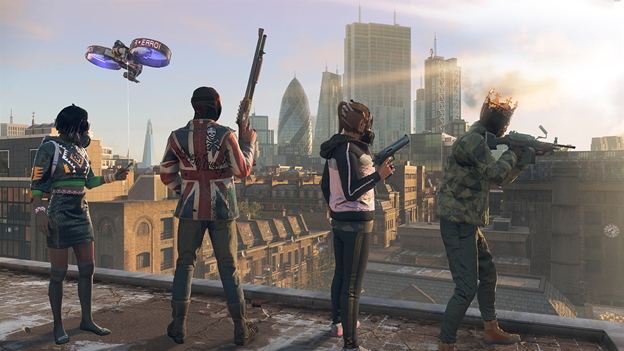 Tags: Action, Adventure, Hacking, Ubisoft, Watch Dogs Legion
Summary
Watch Dogs: Legion may not be a strong contender for the year of 2020 or even in the series, but it still holds up as enjoyable and entertaining. Being able to traverse the futuristic world of London will let players be immersed in that world. The puzzles are quite fun and make you feel like you are “breaking” into the system, making it feel like you truly are the hacker. Even if the big downside is that the missions will start to get repetitive as you play through the story and side missions. It will leave gamers all entertained.
Good
Bad
7.8
Good
Gameplay - 9
Graphics - 8
Audio - 7
Replayability - 8
Controls - 7

Build a resistance from virtually anyone you see as you hack, infiltrate, and fight to take back a near- future London that is facing its downfall. Welcome to the Resistance.
8.1
Average User Rating
1 vote
Click on a star to submit your own rating!
Your Rating: 0
Submit
Genre:Third person shooter
Developed By:Ubisoft
Publisher:Ubisoft
Platforms:PC (Ubisoft+), PlayStation 4, Xbox One, Xbox Series X