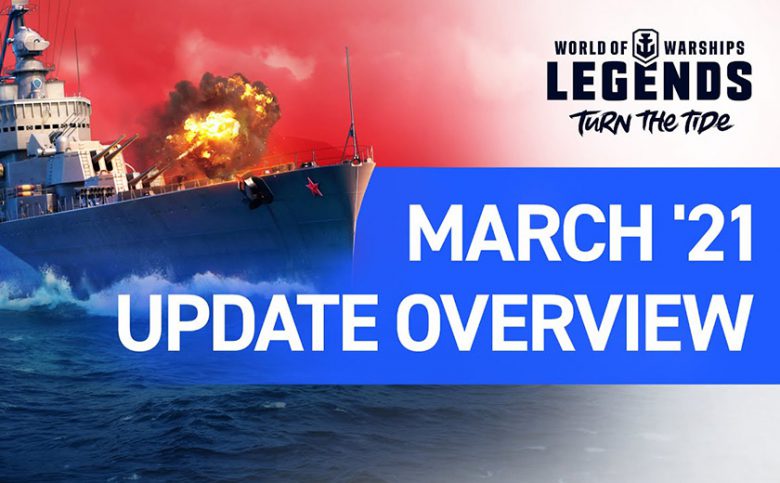 March is here in World of Warships: Legends, bringing along a new campaign to get a premium Russian cruiser, the full release of British heavy cruisers, two Legendary Bureau projects, and some returning favorites. Let’s take a look at this action-packed update.

The featured campaign for the March update is “Taken By Storm,” bringing the Tier VII Russian cruiser Ochakov as the crown jewel for your efforts. Named for the Russian victory over the Ochakov fortress in times long ago, this ship is based on a project to build a compact light cruiser capable of fulfilling many roles. Though her total firepower is not her main attraction, Ochakov’s 6-inch (152 mm) guns have excellent ballistics, shell performance, and reload speed. Plus, she has access to several additional tools like Radar, Sonar, and long-range torpedos. Taken By Storm will be available for five weeks, with 100 milestones to reach by completing missions in battle—dedicated captains can even get some Steel Badges after reaching milestone 100. Plus, you can now use Legendary tier ships to complete some of the missions and progress through the campaign. Make sure to get Admiralty Backing and earn this multirole ship.

Sailing out of early access, the British heavy cruiser line is fully available in this update. These classic British cruisers have an interesting kit, including consistent guns that can batter enemy ships, single-launch torpedoes, a powerful heal, and sonar. The Albemarle awaits at Tier VII, combining all of these tools with a Radar on top. Hampered only by gun range and maneuverability, these new ships are set to find their home within the waters of World of Warships: Legends.

Two new Legendary-tier ship projects are starting in the Bureau this update, one for the long-serving American destroyer Gearing—bringing its adaptable combination of six 5-inch (127 mm) guns and extremely long-range torpedoes to Legendary tier battles. The British battleship Conqueror is sailing in with a monstrous twelve-gun salvo with excellent high-explosive or short-fused armor-piercing shells. Players can start researching these ships immediately through the Research Bureau alongside the other Legendary tier ships.

Players can get their hands on the elusive fan-favorite cruiser Belfast, plus plenty of St. Pat’s goodies from the Pot of Gold, a container that guarantees doubloons and camo but can also bring one special luck in the form of a very green permanent camouflage for Belfast!

Ranked Battles make a return for two weekends this update, this time we’ve changed the rules a fair amount. Instead of running for several weeks, this set of Ranked Battles will be two intense sprints through seven ranks in 5 versus 5 battles. The grand prize for Ranked Battles is a pile of 700 Steel Badges per season! For captains striving to earn Steel Badges, Ranked Battles are going to be one of the best ways to obtain them.

A few smaller additions are joining the roster of World of Warships: Legends, including the new American destroyer commander Albert Gleaves. Gleaves specializes in improving the torpedo armament of the American destroyers, providing a new edge to some of the higher-tier ships for the USN fleet.

Keep your eyes on the event horizon, there may yet be a special space event coming to shake things up for April Fool’s Day! Set sail into the March Update, and turn the tide.