On a cold, foggy evening, you see a figure awkwardly stumble towards you. It has something in its hands. It leans on you, hands you some items, and says “Run!” Out of the fog steps a huge, overpowering monster. “TEA!” it bellows. You finally look down at what the stranger handed you. It’s a tub and a can of G FUEL Nemesis Tea Flavor — available to purchase for U.S. customers only when the Resident Evil™ 3 video game releases on April 3rd. 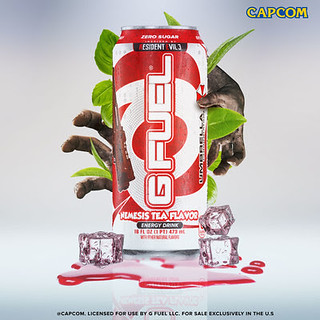 Inspired by the nightmarish Resident Evil 3 and developed in partnership with Capcom®, G FUEL Nemesis Tea Flavor will empower you to rip through hordes of zombies and run away from the shambling masses with ease.

Now, you’re also going to need some backup going up against Umbrella Corporation’s notorious bioweapon Nemesis. That’s why G FUEL Nemesis Tea Flavor will come in a 40-serving tub on April 3rd and a convenient 16 oz. ready-to-drink (RTD) can later in April.

“We’re so excited to be a part of such a big series in gaming history as Resident Evil. It has redefined the survival horror genre time and time again,” said G FUEL Founder and CEO, Cliff Morgan. “Now, armed with G FUEL Nemesis Tea Flavor, gamers will have the increased energy and focus they need to survive and conquer Resident Evil 3.”