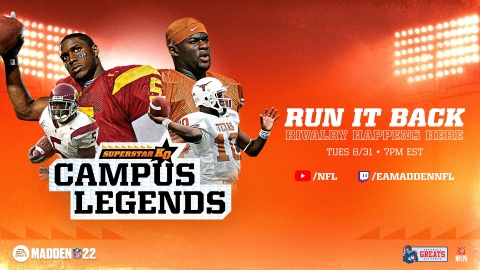 Tune in to the NFL YouTube Channel Tonight to Catch Vince Young and Reggie Bush Face-Off in Madden NFL 22 from Rose Bowl Stadium and Relive One of the Most Memorable Bowl Games in History.

As the college football season begins and NFL Kickoff approaches, Electronic Arts is celebrating the successful launch of EA SPORTS Madden NFL 22 by enabling football fans to throwback to their college days with the release of ten college football teams, complete with rosters of alumni that are some of the biggest college football legends. The “Campus Legends” limited-time event launched today in the fast, fun multiplayer mode, Superstar KO, across all platforms. Video game players for the first time since 2013 can now play with or against friends in a college football experience.

To highlight the launch of “Campus Legends”, former EA SPORTScover athletes – University of Texas legend Vince Young and USC legend Reggie Bush – will face off at Rose Bowl Stadium as their respective schools in a Madden NFL 22 matchup. The pair will run it back to their infamous 2006 Rose Bowl showdown with USC alumni Matt Leinart and ESPN broadcaster Beth Mowins serving as commentators. The showdown streams tonight at 7 pm ET on the NFL YouTube Channel and Madden NFL Twitch.

“I’ve been a Madden fan for as long as I can remember, so it’s going to be truly special to hit the sticks and see myself in my college uniform for the first time in the game,” said Vince Young, Texas legend and two-time Pro Bowler. “I can’t wait to take on Reggie [Bush] again in our old colors. I’ve got some serious Madden skills – looking forward to bringing home another win for the Longhorns.”

“Throughout the football season, we deliver new content and enhancements to our Madden players and we’re really excited to bring the fanfare of college football to the millions of players already enjoying Madden NFL 22 to one of our most accessible ways to play in Superstar KO,” said Seann Graddy, Executive Producer, EA SPORTS Madden NFL.

Superstar KO arrived in Madden NFLas a surprise to fans via a post-launch, live service update in Madden NFL 20, and is one of the game’s most unique modes offering quick-hitting gameplay and a perfect way for players to get a rewarding football fix. In Madden NFL 22, players can play with or against friends in traditional quarters using college teams in either 1v1, 2v2, or 3v3 multiplayer format and earn rewards that can be used in Madden Ultimate Team.