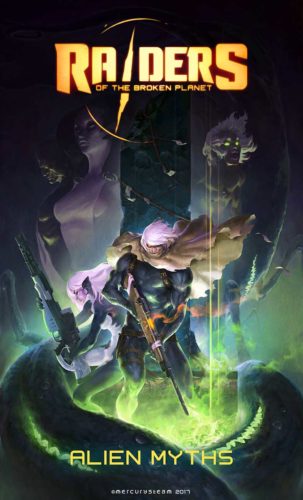 MercurySteam have released the debut developer diary for Raiders of the Broken Planet, that focuses on the role of the Antagonist, one of the core pillars in the 4 divided by 1 asymmetric shooter.

While playing co-operatively, players run the risk of having an Antagonist join their game, to stop them from achieving their objective. The Antagonist can select any character from the Raiders roster and is able to see which characters the Raiders team selects. This gives the Antagonist the opportunity to pick a character whose strengths and weaknesses are tailored towards the opposition. Combined with the shifting objectives, complex enemy AI and dynamic  characters, the Antagonist is another element that makes the outcome of matches impossible to predict as both sides do everything they can to win.

MercurySteam have also released the next character comic for Raiders of the Broken Planet featuring the mysterious Lycus Dion, a deadly and unhinged mercenary— a true force to be reckoned with. Armed with a shotgun and kinetic shield, Lycus is hyper-offensive, revelling in the fear he instills in his prey. And he’s not afraid to get his hands dirty in close quarters combat—Lycus excels in close range, a master of relentless aggression. His kinetic shield requires  movement to stay charged, further coaxing those who select him to get up close and personal to unleash his savage combat potential.

Lycus’ origins are shrouded in mystery, rumoured to have been seen fighting in different wars across multiple centuries. Is he a myth, a ghost or are all the stories about him somehow true? No one knows for sure, but his entry into the war for the Broken Planet can only mean one thing: chaos.